Mexican Indians from the organization 20 United Peoples of the Cholulteca and Volcanes Regions have occupied a mineral water bottling plant of the company for a month Bonafont, linked to the French group Danone, no Juan C. Bonilla municipality, Puebla state, central-southern country.

The occupants are neighbors to the factory and claim that the springs are drying up due to the company’s drilling in aquifers in the region.

In the part of the building that was occupied, the indigenous people inaugurated a space called “Casa dos Povos”, where they debate the right to water, hold workshops and collectively decide on the movement’s next steps.

According to the organizers, this month a community radio should be installed at the site.

Indigenous people accuse the State and the company of harassment and intimidation, and stated this week that they intend to call the Inter-American Commission on Human Rights (IACHR) to investigate possible violations.

The questions present in this text were sent to Grupo Danone in Mexico, which responded through its Press office. The company says it considers the occupation illegal. Check the note in full at the end of the article.

In interviews, the organization’s leaders always appear with their faces covered, to avoid identification.

O Brazil in fact spoke with one of the activists, on condition of anonymity.

“What Bonafont is doing is part of a major problem in the region, as transnational industries started arriving here almost 40 years ago. They expropriated the lands of many peasants, and today they pour toxic water into our rivers”, he says.

“And this happens because the government and institutions allow the exploitation of water in an excessive way, without environmental impact studies.”

She says that the decision to occupy the factory premises was taken collectively, in an assembly that brought together the 20 peoples of the region.

“Occupying the factory was the only way to guarantee that Bonafont, and any other company, will no longer use this space to steal our water and sell it for the benefit of a few entrepreneurs,” he says.

“The authorities had been imposing only fines [à empresa], but the company manages to pay, because it has a lot of power.”

There is no deadline for vacating the factory, as the protesters do not expect to negotiate with the company or the State. The intention is not to reduce the volume of water extracted by industry, but to definitively stop the industrial exploitation of the resource.

In addition to preventing the expropriation of water, the occupants intend to use the space to strengthen bonds and improve the training of the indigenous people who live in the surroundings.

“We want to use this space to rebuild our communities. In addition to water, the region has other problems, such as lack of education, low-paid jobs, children no longer know how to work the land. So, it will be a space to work on health, ecology, women’s rights”, she explains. 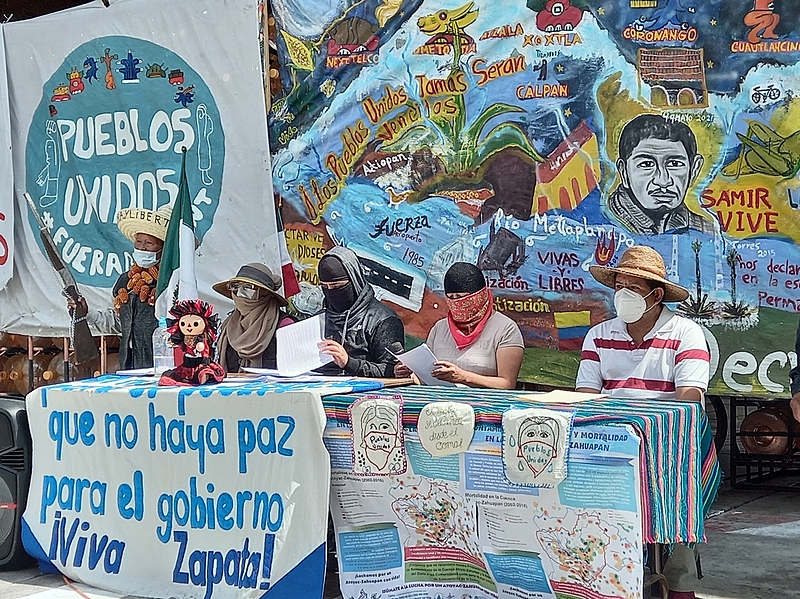 In the first month of occupation, the place was the stage for debates with international researchers on the right to water, a national meeting of women, drawing workshops, basic math classes and first aid.

“The objective of this occupation is to build life in a space where life was being taken from us”, completes the activist.

Present in the Brazilian market since 2008, Bonafont established itself in the Puebla region for almost 29 years. The Juan C. Bonilla plant has been in operation since 2004.

According to the indigenous people, the company extracts 1.6 million liters daily in the region. This volume would be equivalent to about 20 bottles of water per minute.

The exploitation of aquifers by private companies in Mexico is regulated by the National Water Law, 1992 – considered a stimulus to the commodification of the service.

Since then, Mexican states such as Puebla have privatized their water supply.

For at least a year, indigenous people living around the Bonafont factory have been forced to buy bottled water for their daily activities.

“The rivers and springs are drying up. Fruit trees are being lost, and many species of animals have died as a result of the activities of these industries”, said the activist who preferred not to be identified.

Today, around 70% of the population consumes bottled water daily, making Mexico a leader in this regard in Latin America. Globally, the country is second only to China and the United States.

Bonafont was the first company to supply bottled mineral water in the Mexican market, in 1992. The success of sales in the country attracted the eyes of French giant Danone, which two years later bought 50% of the brand – today, holds 100%.

The drop in the level of wells and springs impacted dozens of indigenous communities. In addition to drinking, cooking and bathing, they depend on water to raise animals and irrigate crops.

Indigenous people affected by the water expropriation protested for the first time in front of the Bonafont unit on March 22, World Water Day, preventing access to the factory since then.

On the occasion, there was a visit by a representative of the government secretariat of Puebla, who pledged to open a dialogue with the company to solve the problem of water scarcity in the communities.

As there was no progress, around 30 protesters occupied part of the factory on 8 August. The stoppage of Bonafont operations has already had practical impacts on the lives of communities.

“You can very clearly see the difference in the water level. Since March, the springs have risen up to 50 centimeters”, said one of the indigenous people in interview with the mexican newspaper The Day.

At a press conference last week, occupation leaders said they had been documenting intimidation by the National Guard and Mexican police.

In addition to positioning vehicles in front of the occupation and recording video daily, security forces would be flying over the Bonafont unit with drones.

Information circulates in the Mexican press that arrest warrants have already been issued against the occupants.

Fabrice Salamanca, Bonafont’s Vice President of Corporate Affairs, has publicly stated that he has prosecuted the “invaders”, and that they will have to answer for alleged crimes.

“We know that the State and large companies want to criminalize those who defend water, life, forests, land. That won’t stop us. We will keep fighting for what we consider vital”, reaffirms the activist heard by the Brazil in fact.

The occupants say they haven’t even received a decree expropriating the site.

“So far, we do not know who the targets of these complaints are, but any attempt at criminalization affects all peoples. For us, these statements violate our rights, as we are environmental defenders, not criminals,” they said at the press conference.

In Brazil, Danone has also been investigated for damages caused by the exploitation of mineral water.

In 2008, the company submitted a request to increase annual exploration levels, from 9 million liters per year to 61.8 million. The following year, it made new requests for licensing to explore new sources, intending to reach a collection of 147.6 million liters of mineral water per year.

The volume drew the attention of the Public Ministry of Minas Gerais, which investigated the case and filed a public civil action.

“There is no compliance with the groundwater regulatory legislation, in addition to not being carried out within the preventive technical compliance, with the consequent creation of social and environmental impacts due to the flow of production”, described the promoter Carlos César Marques Luz at the time.

In 2015, the company signed a Conduct Adjustment Term (TAC) and had to pay R$ 5 million for damages caused by water exploration in Jacutinga (MG), southern state – BRL 3 million in material damage and BRL 2 million in collective damage to local communities.

According to the company, this well operates “unconnected to the surface water sources” used by the communities.

“As a company, we allow extracting a maximum of 0.09% of the available water from the Vale de Puebla aquifer and we never exceed this limit. These permits are based on a scientific analysis of how much the aquifer needs to regenerate”, says the note sent. by Danone’s advice.

The company also says that it has recent reports from CONAGUA attesting that the aquifer Bonafont uses has a “positive regeneration rate” over time.

“Our plant is exclusively dedicated to the production of an essential need: to provide bottles of safe drinking water for the homes of communities and distributors that today are not supplied under normal conditions”, continues the company’s statement.

“We respect freedom of expression and the right of everyone to disagree, as long as the rule of law is respected. We trust in the establishment of a dialogue table with the authorities and neighbors in the region to resolve the matter.”

Finally, Danone calls on the three powers to “enforce the law and reverse the arbitrary closure of the plant, so that we can provide safe drinking water and guarantee income to the 600 families who depend on this work.”

Film brings dialogues between Hitler, Mussolini, Churchill and other tyrants in purgatory

In two months we will have overcome important issues to resume relations with Venezuela, says Petro

“We are the invisible guardians of the forest”: three thousand quilombolas gather in Brasília

Tajikistan announced that it will not be able to massively accept Afghan refugees, and requires assistance from the UN and the international community