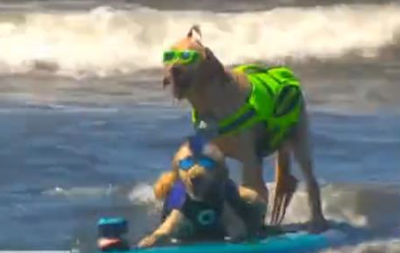 White terrier Piti, who, by the way, was a novice in these competitions, received the main prize in the championship.

The dog surfing championship was held in California. About 40 sports dogs took part in the competition. This is stated in the TSN plot.

To win, the pet needed to hold out on the board as long as possible.

“The jury evaluated the duration of the race, confidence, agility and enthusiasm,” the storyline says.

The winner in this championship was the white terrier Piti. The dog is a novice surfer, however, he confidently bypassed even experienced competitors, for which he received a medal and a craft surfboard.

It is noted that this championship raised $ 14,000, which will go to charity.

Unusual surfing: in California, they swim on the waves with a goat

Shmygal laughed, talking about the possible transition to the Latin alphabet