Article | What is union good for? The answer, in September, is worth our lives

This question comes up again and again when unions try to convince workers about the importance of joining and strengthening the collective struggle.

The answer, this September, is heard in all corners of Santa Catarina and is worth our lives. It is strong and comes from more than 25 unions linked to the Forum of Public Servants of Santa Catarina. These unions have joined forces and resources in an unprecedented media campaign to stop, in the coming days, the explosion of rights for all of us.

:: On the march in Brasília, public servants are calling for the removal of the administrative reform from the agenda ::

The so-called Proposal for Amendment to the 32nd Constitution, called “Administrative Reform”, is about to be voted on by the National Congress, a project that will shatter the Brazilian State.

The united unions are warning of this danger in messages broadcast on radios, sound cars and leaflets in 14 cities in Santa Catarina, in insertions on 50 community radios and in texts and illustrations on social networks. Together, the Forum entities have already campaigned on billboards to pressure Santa Catarina’s parliamentarians to vote against the project and organized dozens of meetings and acts in the street on several occasions since the beginning of the year, intensifying actions in this decisive month. Amidst the covid-19 pandemic, we will also go to Brasília to fight for the project not to pass. 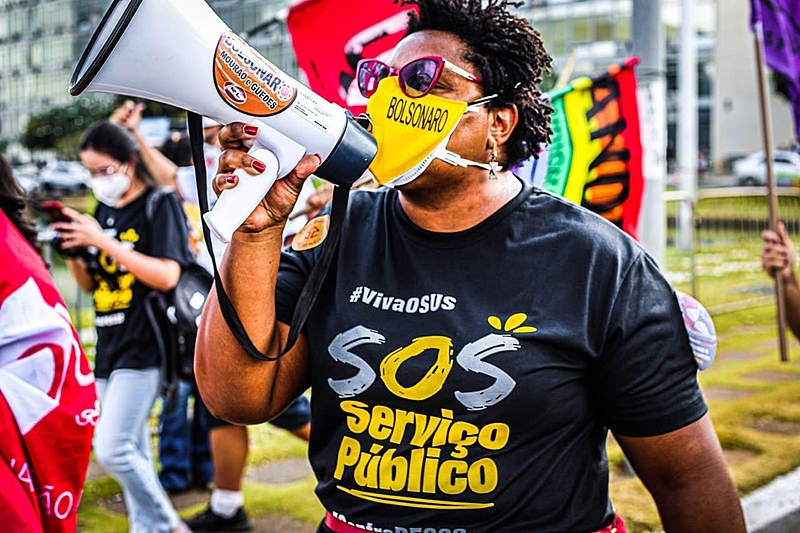 :: Entities intensify acts against the proposal to dismantle public services this Tuesday (14) ::

This reform ends public tenders and brings back the “jobs hanger”, which benefits those who are friends with the authorities in power. Current employees may have work hours and salary reduced by up to 25%. The new ones, if they manage to do a contest, will receive less for the same work done today. Historic achievements like working hours will be wiped out overnight. The said reform also opens the doors for companies to take over what is now a public service through outsourcing. That means it doesn’t just take public servants. The entire population, especially the most impoverished, will be even more underserved. This “reform” is death.

At risk is a patrimony that has been hard-won by so many generations of workers who, in past decades, did not remain silent and waged collective struggle. A union, then, is for us to go on together, with the audacity of those who, in past times, bequeathed us rights, before it’s too late, before those rights are taken from us.

:: Article | Employees return to mobilize on the 14th against administrative reform ::

The challenge is big, but we are big too.

**This is an opinion piece. The author’s vision does not necessarily express the editorial line of the newspaper Brasil de Fato.