Lula, Boff and Paulo Freire’s widow participate in the educator’s centenary event on the 19th

The centenary of Pernambuco educator Paulo Freire will be celebrated virtually with great joy and popular culture. Several institutions of the Brazilian and international educational movement are promoting, on September 19th and 20th, the 100th Anniversary of Paulo Freire in a virtual event. The live will be composed of a political, pedagogical and cultural act, with the presentation of the Pernambuco singer Alceu Valença, at 6 pm on the 19th.

The program will also feature the singer and composer Silvério Pessoa, the Cavouco Trio (Paula Bujes, Pedro Huff and Antônio Barreto – UFPE), the Flor da Lira block from Olinda, the Quadrilha Junina Origin Nordestina, the Maracatu Estrela Brilhante do Recife and the cordelist Mariane Bigio. The event will be broadcast on Youtube channels of the CNTE, gives UFPE and yes IEAL. 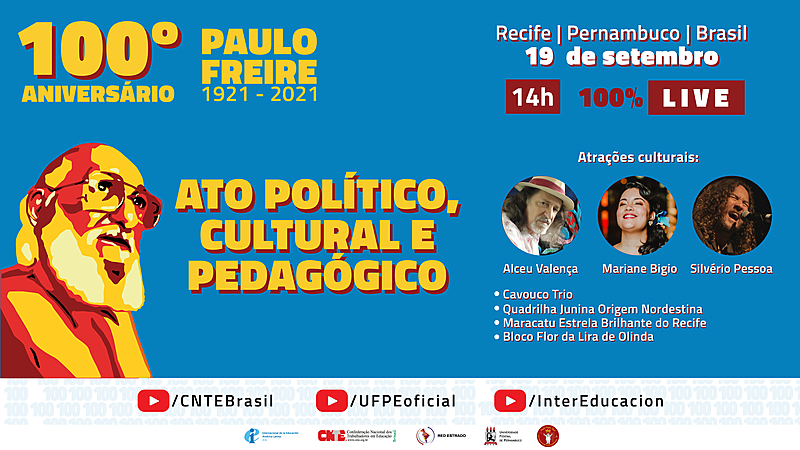 Event will be broadcast simultaneously on UFPE, CNTE and IEAL channels on YouTube / Disclosure

In addition to the cultural program, the event will include the presence of educational and union leaders from Brazil and the world, such as former president of Brazil Luiz Inácio Lula da Silva; the secretary general of the International of Education, David Edwards, the teacher Nita Freire, widow of the educator Paulo Freire, the writers Leonardo Boff, Mário Sérgio Cortella and the ex-mayor of São Paulo and federal deputy Luiza Erundina, in addition to the inauguration of a sculpture by Paulo Freire in Buenos Aires, Argentina.

On September 20, the celebration of the Centenary of Paulo Freire will be dedicated to listening to the various voices from the American continent, Europe and Africa who study and practice Freirean thought. The live on the 20th will have, at its opening, the Aula Magna of the academic semester at UFPE, given by the dean Alfredo Gomes and by the vice-dean Moacyr Araújo.

The importance of Paulo Freire for social movements around the world will also be a topic of debate, with the presence of educators from Brazil, Argentina, Chile, Cuba, United States, Portugal, Spain, São Tomé and Príncipe, Angola, Mozambique, Guinea Bissau, Cape Verde, all sharing experiences of frerian education. As well as testimonies from public administrators and parliamentarians dealing with Paulo Freire’s contributions to educational policies.

Film brings dialogues between Hitler, Mussolini, Churchill and other tyrants in purgatory

In two months we will have overcome important issues to resume relations with Venezuela, says Petro

“We are the invisible guardians of the forest”: three thousand quilombolas gather in Brasília

US to exchange cutting-edge technology with Britain and Australia