Caterpillars overrun the city in Belarus 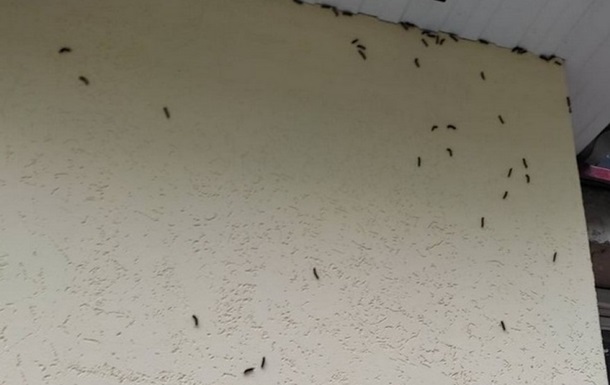 Caterpillars stuck to the walls of buildings

Specialists began to cut and burn infected trees, but the caterpillars spread to homes and shops, and stuck around park benches.

In the Belarusian city of Luninets in the Brest region, quarantine was introduced for three years due to the invasion of caterpillars of the marching silkworm and the American white butterfly. About this on Thursday, September 16, informed local edition of Media-Polesie.

As reported, the specialists of the Luninetsk regional state inspectorate for seed production, quarantine and plant protection took samples of caterpillars and sent them to the regional laboratory.

When it was found that these are the larvae of the marching silkworm and the American white butterfly, it was decided to introduce quarantine, since the latter is a quarantine object.

The city has already begun to cut and burn infected trees, but the caterpillars have spread to homes and shops, and stuck around benches in parks.

The publication reminds that, according to the rules, now specialists have to cut and destroy nests with caterpillars as they appear, catch them before pupating, remove leaves under infected trees and burn them, and also treat plantations with insecticides and bacterial preparations approved for use. in Belarus.

We will remind, in May in the east of the United States was recorded a lot of cicadas that crawled out of the ground after 17 years of hibernation. There were tens of billions of individuals.

A tornado of mosquitoes was filmed in Kamchatka

The decision to suspend vaccination among adolescents was contributed by Bolsonaro, says Queiroga

Head of OSCE: It is a pity that we did not reach a consensus with the Russian Federation