North Korea announced the launch of a rocket from a train 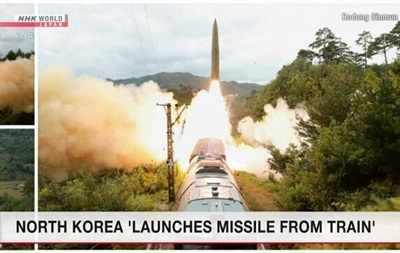 North Korea launched a rocket from a train

The rocket accurately hit a target in the Sea of ​​Japan at a distance of 800 kilometers, according to the DPRK.

The DPRK Armed Forces conducted a test missile launch from a train. About this with reference to the North Korean newspaper Nodong Sinmun informs NHK on Thursday 16 September.

The training launch was carried out by the newly created railway missile regiment. The pictures show how a rocket takes off from a train on a railway track, releasing a powerful flame. At the same time, it is not specified what type of missile was launched.

According to the newspaper, the exercises were carried out in one of the mountainous regions in central North Korea – the missile accurately hit a target in the Sea of ​​Japan at a distance of 800 kilometers.

At the same time, the newspaper did not specify whether North Korean leader Kim Jong-un was present at the exercises.

Note that on the eve of the Japanese side reported that the DPRK launched two missiles in the direction of the Sea of ​​Japan. The missiles fell outside Japanese territorial waters and the exclusive economic zone.

We will remind, on Monday, the DPRK announced the successful tests of a new long-range cruise missile, which took place on September 11 and 12. According to Pyongyang, targets were hit at a distance of 1.5 thousand kilometers. They stressed that this was “key work” that was carried out with “special attention” by the Central Committee of the Labor Party.

In Belarus, the Investigative Committee opened a criminal case on desecration of state symbols due to damage to the border sign on the border with Ukraine