President Jair Bolsonaro (non-party) authorized the temporary presence of US Armed Forces officers on Brazilian territory for military training. The troops are expected to carry out exercises in the Vale do Paraíba region from November 28th to December 18th this year.

The military exercise that will allow the entry of the US military is called combined training CORE 21 (Combined Operations and Rotation Exercises, its acronym in English). In July, Brazilian officials went to Texas to agree the details of the exercise with the United States.

The presidential decree with the permission was published this Thursday (14) in the Official Gazette of the Union. The Brazilian Army says that the objective is the “training” of the forces. The 12th Light Infantry Brigade (Airmobile) and the 5th Light Infantry Battalion must participate in the training. On the US side, the 101st Air Assault Division will participate.

Vale do Paraíba is located between Rezende, in Rio de Janeiro (RJ), and the city of Lorena, in São Paulo (SP), where the Academia Militar das Agulhas Negras is located. 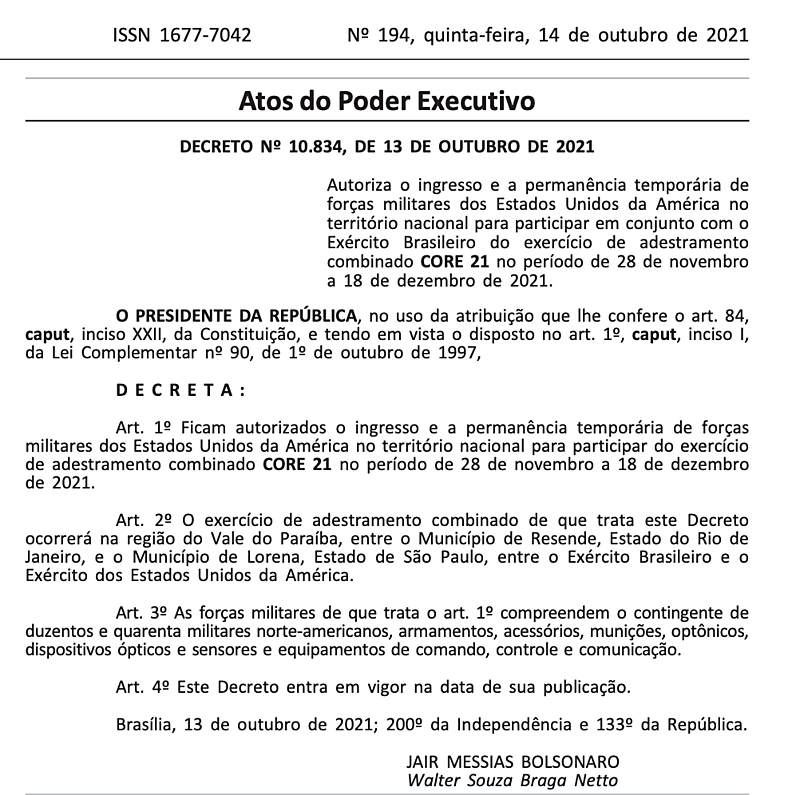 Activities carried out jointly by the armies of the two countries were the object of an agreement at the 36th Bilateral Conference of the Brazil-US General Staff, held in October 2020. The program foresees joint actions in every year until 2028.

According to the General Secretariat of the Presidency of the Republic, initiatives like this are also part of a bilateral agreement between the two countries for “cooperation in defense matters”, which was signed in Washington, on April 12, 2010, and promulgated on 18 April December 2015.