In action that is part of the National Journey of Food Sovereignty, the organizations of Via Campesina Brasil held an event at the headquarters of the Brazilian Association of Soy Producers (Aprosoja), in Brasília, this Thursday morning (14).

The demonstration, which was attended by around 200 peasants, also took place in four other regions of the country, and aimed to denounce the exclusionary and income-concentrating model represented by agribusiness, which drives food inflation and contributes for the increase of hunger in Brazil.

:: With the highest rate for September since the Real, inflation breaks 10% and continues to accelerate ::

Currently, the country lives in a perverse contradiction. While the agribusiness sector breaks export records, with projections indicating a turnover of 120 billion dollars, an increase of 20% compared to 2020, more than 116 million people are in a situation of food insecurity in Brazil, which is more of the half of the population. Of this total, 43.4 million people did not have enough food and 19 million were effectively starving, according to data from the “National Survey on Food Insecurity in the Context of the Covid-19 Pandemic in Brazil”, prepared by the PENSSAN Network earlier this year .

Although it is the sector in which Brazil exports the most products, agribusiness is dominated on a world scale by a small group of multinationals, none of them Brazilian. Together, companies such as ADM, Bunge, Cargill and Louis Dreyfus control 70% of the production, marketing and transport of agricultural products.

::The contradiction between records in agribusiness and hunger in Brazil::

Because of this, practically all Brazilian agricultural production is subject to international demand and linked to the variation in the price of the dollar, which is experiencing a historic high against the real, impacting various sectors of the economy. One of the direct results of this is the increasing allocation of land for the production basically of soy, corn and sugar cane, to the detriment of the production of rice, for example, which, despite being a fundamental item of Brazilian food, is a product currently largely imported by Brazil. 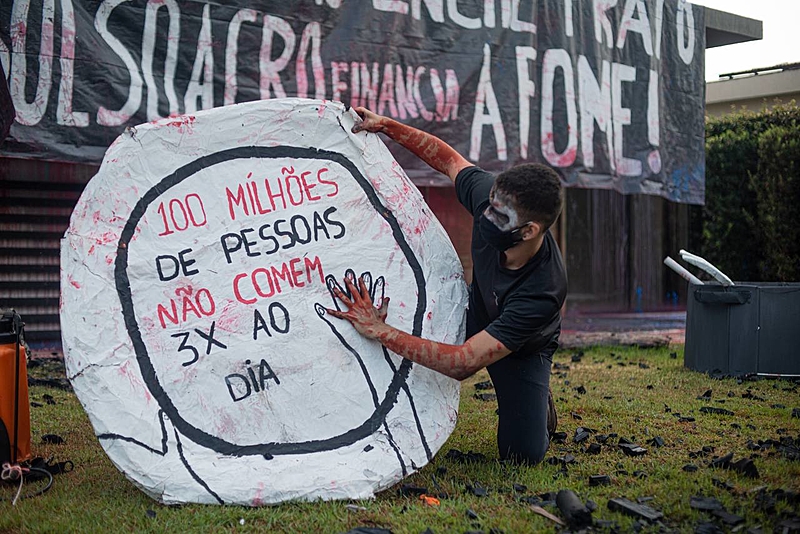 “Food Sovereignty is the radical democratization of processes for the organization of production, marketing and distribution of food. The struggle for Food Sovereignty involves the struggle against the devastating model of agribusiness and has in agroecology and agrarian reform the fundamental pillars of dispute, presenting a another model of agriculture, sustainable, without poison, with productive diversity, with popular control of the means of production”, says Marco Baratto, from the national direction of the Landless Rural Workers Movement (MST).

::Why farmers and researchers argue that agroecology can solve hunger in Brazil::

In addition to Brasília, the actions of this farm also took place simultaneously in Recife (PE), Vitória (ES), Porto Velho (RO) and Florianópolis (SC), and was also a response to the veto of the Assis Carvalho II Law, which aimed to support the family farming due to the economic effects of the new coronavirus pandemic.

“By vetoing the Assis de Carvalho II bill, which brings an emergency aid program to peasant Family Agriculture, they end up leaving those who support Brazil without any public policy, promoting poverty and strengthening Agribusiness, which produces soy as an alternative of food for the population, poisoning the countryside, desertifying the region, killing and expelling the people who are in the territory for the production of monocultures”, says Mirele Diovana, from the Movement of Peasant Women DF and Surroundings.

:: The numbers show: agribusiness receives a lot of resources and contributes little to the country ::

The proposal, which was fully vetoed by President Jair Bolsonaro, provided for support to family farming until 2022, with extension, discounts, renegotiation of debts of producers and flexibility in rural credit. Among the measures was the payment of aid in the amount of R$ 2,500 per family for producers in poverty and extreme poverty.

The popular movements in the countryside also denounce the dismantling of fundamental public policy programs for family farming, such as the National School Feeding Program (PNAE) and the Food Acquisition Program (PAA), which are practically paralyzed by the federal government due to the cut in funds. Not to mention the extinction, by Bolsonaro, in 2019, of the National Council for Food and Nutritional Security (Consea) 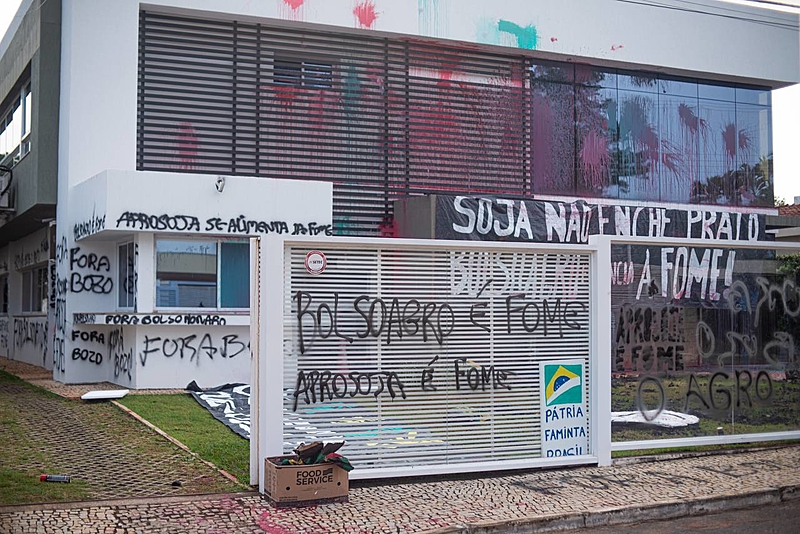 President of Aprosoja is investigated by the STF / Photo: Matheus Alves

The act in Aprosoja is also symbolic because of the organization’s possible involvement in promoting, financing and organizing the anti-democratic acts on September 7, which called for the closure of the Supreme Court (STF) and a coup military intervention in the country.

The organization’s president, Antonio Galvan, was even the target, at the end of August, of a search and seizure warrant issued by the STF in the investigation that investigates incitement to violent acts and threats against democracy. In the decision, the Supreme Court even determined the blocking of Aprosoja’s bank accounts on the eve of the PocketNArist acts. In a statement, last month, after the repercussion of the case, the organization denied any support for agendas such as closing the STF and attacking democratic institutions.