One would expect a country that had a quarter of its critical infrastructure threatened by climate change to urgently address environmental issues, but instead, the United States adds yet another disaster to its long list of the world’s biggest polluter in history. world.

This time, the unnatural tragedy happened on the popular Huntington Beach, in the state of California, where a spill dumped more than 470,000 liters of oil into the Pacific Ocean. The local mayor called the incident an “environmental catastrophe”, and experts see no exaggeration.

In conversation with the Brazil in fact, activist Laura Deehan, State Director of the NGO Environment California, said that the dumping of the oil is an immediate death sentence for fish in the region, but that it is not only marine life that is harmed. “Oil basically destroys the feathers of birds that live in this ecosystem, leaving them vulnerable to the cold,” he says, “but many of the symptoms aren’t felt until weeks or months after the accident.”

Also according to Deehan, leaks like this are also extremely harmful to humans. “In addition to people not being able to swim, surf or enjoy the day at the beach, the air becomes a kind of toxic soup, contaminating even those who live further away from the coast. This type of tragedy is very, very serious.”

The situation gets even more complicated as investigations are conducted. “There are reasons to suspect that this oil spill has been going on for a long time, and the Oct. 2 spill was just the news,” explains Brettny Hardy, Earthjustice’s environmental lawyer.

::Also read: Another wall in the US? Environmental project wants barrier in Miami::

To the report of Brazil in fact, Hardy explains that the authorities responsible for overseeing the platforms do not have the apparatus to validate the underwater infrastructure, and that they entrust this responsibility to the companies operating the platform. “What this agency does is basically fly over the region from time to time and see if the water has a different glow, which would indicate a leak,” he says, “this operation is not at all effective; our inspection is very flawed.”

Monitoring the structure of these platforms is critical, especially since many of them were installed 40 years ago or more. In California alone, 23 oil and gas platforms are in operation — the number would certainly have been higher had the state not banned new drilling in 1969, when a major oil spill took place in Santa Barbara. 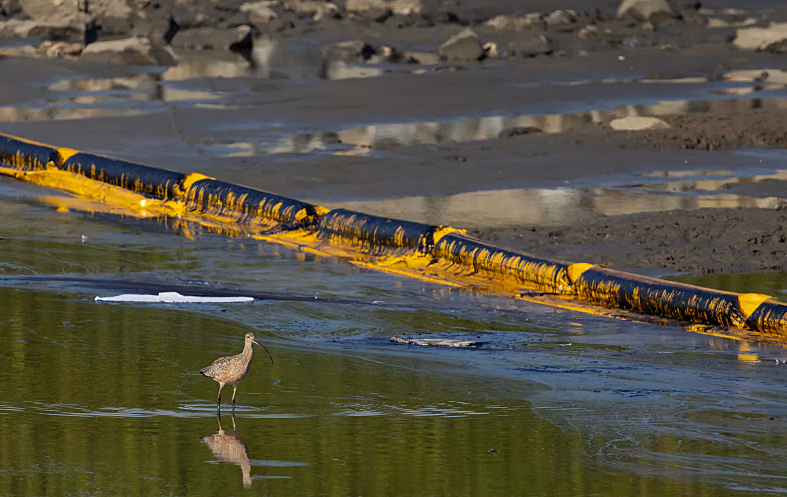 The beaches affected by the spill received long tubes that serve to retain the oil that reaches the sands. Rather, it reaches the animals of the ecosystem / David McNew / AFP

To “get around” these state rules, many companies use the law that says that waters from five kilometers off the coast of the continent become federal territory, and there is no law that prevents or limits new drilling.

In the Huntignton Beach case, the most recent leak, an “ambiguous” legal discussion comes into question. “Although the waters there are federal, the rule says that the underlying layers of the oceans are a state responsibility,” points out Richard M. Frank, director and professor of environmental law at the University of California Davis.

“As a result, state and federal agents have a responsibility to monitor oil and gas platforms in the ocean waters off the coast of California. when there is a leak,” he says.

Company will be fined “still impossible to calculate”

According to Frank, it is still impossible to calculate the amount of the fine to be imposed on Amplify Energy, the company responsible for the defective platform. “In addition to criminal and environmental complaints, there are still lawsuits by civil society,” he says, “so restaurants, hotels and other coastal businesses can go to court seeking redress, because they were harmed.”

Amplify Energy accumulates more than 70 environmental notifications and about four years ago it also faced a bankruptcy case. It is not known whether the company has the strength to bear the consequences of this disaster or fight for a lighter penalty. The company saw its shares plunge 44% on the Monday following the tragedy.

To prevent these accidents from happening, NGOs like Earthjustice are calling on the United States to end concessions on these offshore oil rigs and speed up its transition to clean energy.

The reality, however, is quite different — as Professor Richard Frank explains: “Here in the United States, as in many other nations, actions are only taken after tragedies. California itself did not have an oil spill regulation, and he only did so when he was faced with such a disaster.”

So Frank is optimistic that this latest incident will result in clearer and stricter rules. “The ideal would be to design the legal structures before the tragedies, but at least we see that we are updating, correcting the values ​​of fines and penalties, so that they compensate for inflation and serve as an alarm to companies, who need to reimburse the government for cleaning up of the beaches”, he evaluates.

Experts agree that environmental issues have become a political stage, especially after the Trump administration, but they believe that, deep down, the fight for ecology is moving towards being non-partisan.

“When we talk to people, whether Democrat or Republican, everyone agrees that we need clean air to breathe, clean water to drink and that the oceans are not a place to dump,” says Laura, “the important thing is that we transform these desires in actions, and we don’t wait for others to start. If we wait for this state or country to do this or that, we may never start.”