Alderman of Curitiba (PR) sentenced to arrest for defamation against teachers

A APP-Syndicate, which represents education professionals, obtained a favorable decision in court in an appeal against councilor Eder Borges (PSD). He was convicted of the crime of defamation, for having published a montage of photos accompanied by a text attributing to the union the ideological manipulation of students in schools in Paraná.

“The alteration of reality through the montage that consisted of a photo of a red flag together with another photo with signs attributed to communist ideology remained uncontroversial. The association […] has a notorious pejorative slant in relation to the appellant’s performance in relation to the respective students”, records the sentence of the 4th Appeal Panel of the Special Courts of Curitiba.

:: Union contests resolution authorizing the summoning of educators to face-to-face work in PR ::

In the sentence, it is also stated that “Regardless of the discussion of the alleged inclination towards a certain ideology, the analysis for the configuration of the crime is objective […]” 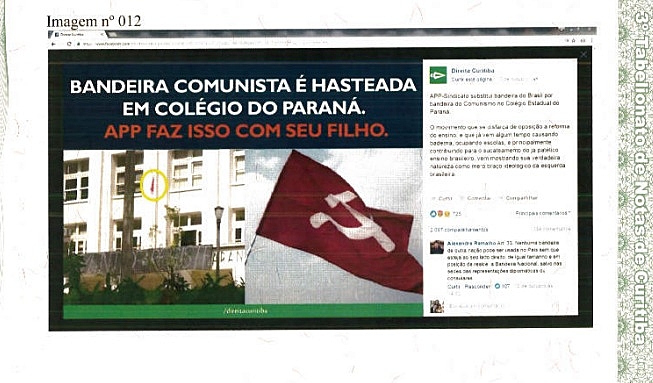 The facts that motivated APP’s criminal complaint occurred in 2016, when high school students occupied schools in protest against the reforms imposed by the Temer government. Eder Borges was the state coordinator of the Free Brazil Movement (MBL) and published in Facebook montage with the image of a red flag raised by students at Colégio Estadual do Paraná, in Curitiba, alongside another image with the hammer and sickle, symbols of Communism, together with the text “APP does this with your son”.

The court decision found that the convict altered reality by mounting photos to defame the APP, a crime provided for in article 139 of the Penal Code.

The magistrates accepted the opinion of the Public Prosecutor’s Office, which pointed out that the dissemination of the image accompanied by the sentence was reckless and offensive. “It is understandable that the imputation of the raising of a leftist flag in a public school by unionized teachers to APP – without this having occurred – can certainly lead to the weakening of credibility in reaction to the dissemination of information by the entity to the social environment and also before union members”, noted the MP.

The court decision establishes a 25-day detention penalty, plus a 20-day fine. The detention sentence, initially set at 15 days, was increased to 25 days because the convict is a repeat offender in the crime of defamation.

Eder Borges, elected councilor in Curitiba by the PSD in 2020, had his mandate revoked by the Regional Electoral Court of Paraná in April this year, for not having rendered accounts in the 2016 election. He appealed and remains in office until decision of the Superior Electoral Court ( TSE).

Councilor says he will appeal

Through his social networks, Borges released the following note:

“Alderman Éder Borges, through his legal advisor Alexandre Zeigelboim, in relation to the facts dealt with in the criminal complaint records No. 0043415-92.2016.8.16.0182, which was rejected in October 2016 and again, in August 2019 , he has to say that he is surprised by the TJPR’s decision, since, as already said, he had recognized the unusualness of his conduct on two occasions and the complete absence of just cause for the criminal action, as he only manifested his right to expression and that , as it is a completely wrong decision, it will file an appeal within the procedural period. It also registers that it is the citizen’s right to express their opinion about an ideological bias, which even contributes to the political debate.”

Temer did not decide to support Bolsonaro, president questions first round without evidence and more

Ukraine supported the creation of a consortium for GTS management