With the end of emergency aid this Friday (29), uncertainty dominates the game over Auxílio Brasil

With the end of the current round of emergency aid this Friday (29), the pressure for the Bolsonaro government to define the destination of the benefit paid to the lowest-income population is increasing. Aimed at informal workers affected by the pandemic, the policy is expected to be followed by a new program that will replace Bolsa Família.

The idea of ​​the administration, which appears about a year before the 2022 elections, would be to start the new benefit in November, but the proposal has not yet been officially detailed and is surrounded by divergences.

:: When it turns 18, Bolsa Família benefits 44 million, but it is about to be disfigured ::

On the one hand, the government is groping for possibilities. Among them is the issue of a decree to institute the new program, as anticipated last Tuesday (26) by the website the antagonist. The aim would be to publish the rule after returning from Italy, where President Jair Bolsonaro (no party) traveled on Thursday (28).

The information disclosed so far by the government shows that the shares will have values ​​20% higher than those of Bolsa Família, a policy launched by the PT in the first term of former president Lula (2003-2007) and that Bolsonaro is trying to overshadow in the midst of dispute that polarizes with the PT.

:: “A shame”: Bolsa Família and PAA replacements should generate negative impact in the Northeast ::

A likely candidate for re-election, the head of the Executive would be looking for electoral dividends in exchange for the offer of the new program, which should serve 17 million families, according to the Minister of Citizenship, João Roma.

“We want people to have the right to decent and permanent help, but we have to know that Bolsonaro’s motivation is just voters, which doesn’t take away the need for permanent help, but this project is not even clear as if it’s going to finance it”, emphasizes Deputy Fernanda Melchiona (RS), deputy leader of the Psol bench in the Chamber, mentioning the dispute around the so-called “PEC dos Precatórios” (PEC 23).

:: Government publishes a decree that institutes Auxílio Brasil. What about other benefits? ::

The government tries to move forward with the latter under the discourse that, when parceling out the court orders – debts acquired by the State from causes definitively lost in court –, the Executive could modify the calculation of the Spending Ceiling and open a fiscal slack of R$ 44 billion to release funding for the Auxílio Brasil.

The management had been projecting installments in the amount of R$400 to be paid by the end of 2022. The limitations imposed by the fiscal adjustment in force in the country would make R$100 of this total exceed the ceiling. The intention cost the government harsh criticism. There is resistance to the measure both within the liberal right and in the opposition.

“Bolsonaro tries as a funding source to make a PEC out of the default and, together, embed more amendments to the center, which is always looking for money. We defend the extinction of the Spending Ceiling, of course. We have been talking about this for a long time, but it is possible to finance a social program by taxing large fortunes, for example”, points out Melchiona, mentioning the proposal drawn up in Bill (PL) 3934, presented by the Psol bench last year.

:: Will Auxílio Brasil be able to solve the country’s current challenges? Understand the Bem Viver Program ::

Different actors also complain about the government’s delay in announcing the directions of the social policy to assist the population that was most affected by the ravages of the health crisis. With the worsening of the socioeconomic crisis, the rise in unemployment and inflation, the political world accuses the government of ineffectiveness in the face of the seriousness of the situation and also draws attention to other factors.

Among them are the country’s lack of credibility with investors and the limbo in which workers who depend on aid to guarantee a minimum maintenance of their basic needs are thrown. 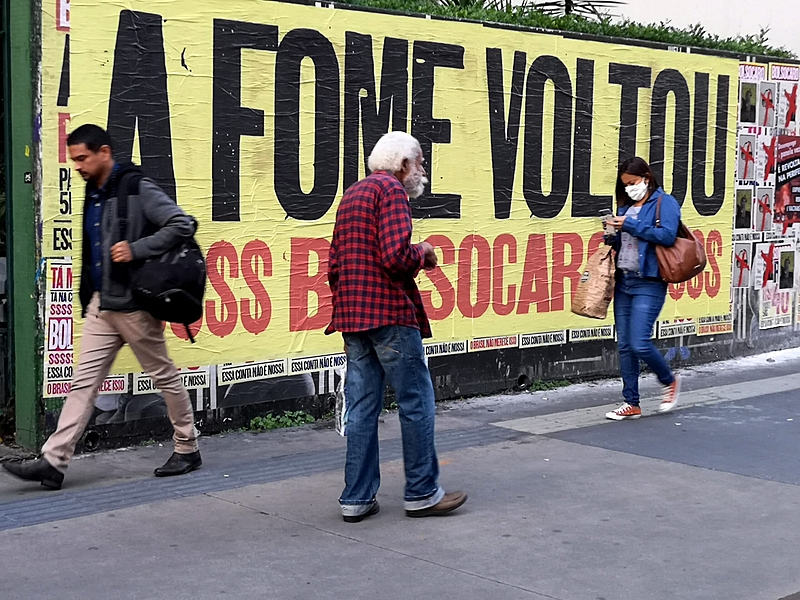 According to surveys, at least 19 million people are starving in Brazil/ Photo: Roberto Parizotti

“This whole delay is because he doesn’t want to help the poor. If he was interested, he would have already presented the program, but, by not presenting it in a timely manner, it shows two aspects: the first is that he doesn’t want to, which is the main thing, and the second is that he doesn’t have the capacity. It is a total disruption of the government, which is a consequence of the first characteristic”, criticizes the leader of the PT’s bench in the Chamber, Bohn Gass (RS).

The congressman recalls the administration’s concern with the drop in popularity of Bolsonaro, who is trying to pave the way for a second term. “He is tight now wanting to vote the precatório because the election is knocking at his door and also because the popular approval ratings of the government are very low”.

A survey released Thursday (28) by PoderData, platform linked to the portal Power 360, showed that the former captain is now frowned upon by 58% of the population.

“He is trying to improve the rates, then he sees that he has to help the poor, but he doesn’t want to and puts an end to the program, which is next year, as if public policy for the poor could only be had at election time . The person leaves the program when he starts to have his income, not when the ballot box hits. In every way the Bolsonaro is wrong,” says Bohn Gass.

The position also resonates with the PCdoB, whose caucus looks down on the idea of ​​extinction of Bolsa Família and the duration of the new policy that has been announced by the government.

“It’s good to make it clear that, in the name of an electoral campaign, Bolsonaro ends a permanent program that has lasted more than 18 years. No government so far has had the courage to end Bolsa Família and hardly any future government would have that courage. It’s very worrying and it’s very mean to the poor of those who do such a thing”, says Perpétua Almeida (PCdoB-AC), one of the vice-leaders of the opposition.

The segment – ​​which mainly brings together PT, PDT, PSB, Psol, PCdoB and Rede – also sings the chorus for a grant of R$ 500, R$ 200 more than the government has projected for the new program. The proposal has been publicly defended, including by Lula (PT), who recently challenged Bolsonaro on social networks to raise the benefit to R$600.

At the same time, the National Congress should analyze and vote on the Provisional Measure (MP) 1061/2021, signed by Bolsonaro in August, which revokes the Bolsa Família from November and institutes the Auxílio Brasil.

The controversy surrounding the matter is expressed, for example, in the number of amendments (suggestions for alteration) presented to the MP. There have been 461 so far, according to the Congress system. A survey made by Poder360 and released last Tuesday (26) points out that the number is greater than 95% of MPs that have already had their processing closed during Bolsonaro’s administration.

Despite differences over the content of the proposal and the difficulties the government has gotten into the economy, the opposition knows that there is currently no political terrain in Congress in favor of the approval of a benefit in the amount of R$600. the group, however, is not to succumb to the difficulties of the articulation scenario in the Legislative.

“We will continue to insist against the PEC of the Precatório, we will not agree with this default and we will continue fighting for a fairer aid for the workers”, says Bohn Gass.

Another Morshin: the Ministry of Health named a region with almost complete vaccination