To celebrate 36 years of occupation of the Annoni Farm, the Movement of Landless Rural Workers (MST) held an afternoon of activities at the Educar Institute, in the Nossa Senhora Aparecida Settlement, in Pontão, RS.

In the territory considered the “cradle” of the MST and whose consolidation became a landmark for the movement and inspired the struggle for Agrarian Reform throughout the country, the act last Friday (30) promises to leave symbolic and concrete roots: at the entrance of the school was installed a bust of educator Paulo Freire, integrating the celebrations of the centenary of the educator of the people; and, shortly thereafter, a nursery was inaugurated named after the banker José Alberto Siqueira, Zecão, who is already producing tree seedlings for the national action “Planting Trees, Producing Healthy Food”.

:: Click here to receive news from Brazil de Fato RS on your Whatsapp ::

Among the special guests who attended were also Father Arnildo Fritzen and former mayor and congressman Antonio Marangon, leaders with strong performance and who played a decisive role at the time of the occupation. Those present took native tree seedlings with them and received food produced by the Agrarian Reform. 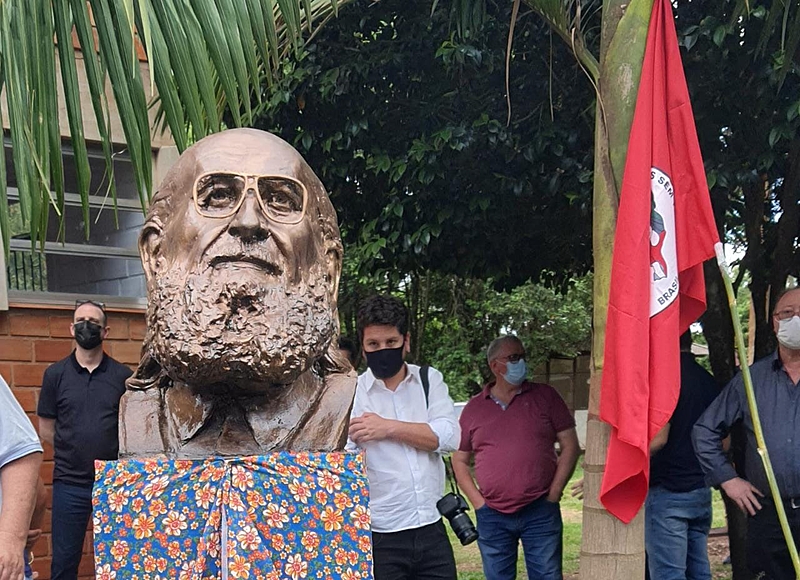 Paulo Freire, more than ever, present at Instituto Educar / Corbari/BdF-RS

The afternoon began with an act full of symbolism, with the unveiling of the bust of Paulo Freire, installed next to the school entrance. The researcher Isabela Camini affirmed the importance of Paulo Freire for Education in Brazil and, in a special way, for the humblest people and for social movements. Historical passages – such as Freire’s visit to the settlements in the Campanha region in 1991 – were remembered with affection and nostalgia. “We have many reasons to celebrate the centenary of Paulo Freire, he who helped us to think about the pedagogy of a school under a black tarpaulin, a school close to the people, respecting reality, working the generative words – land, struggle , fear, death and resistance”, said Camini.

Federal Deputy Maria do Rosário also spoke about the need for Freire’s legacy to be a concrete presence in the agendas of the people for the reconstruction of Brazil and that the first step is to “freire” the struggle: “The people need to stand up, rise up. if our people need to see hope, they need to see a model of agriculture that speaks of health, of a large-scale agroecological proposal, of a model of popular and transformative education”.

Professor Salete Campigotto, highlighting the 16-year journey of Instituto Educar, evoked Freire as a flag of permanent struggle, more than a symbol, a challenge that is renewed for those who propose to walk alongside the people and fight for causes of the people: “We need education as a tool that helps the MST territories to be more and more productive, establishing the commitment to continue training the youth, building an ideal and hope in the struggle for education, for health, for Agrarian Reform and for a better world”. 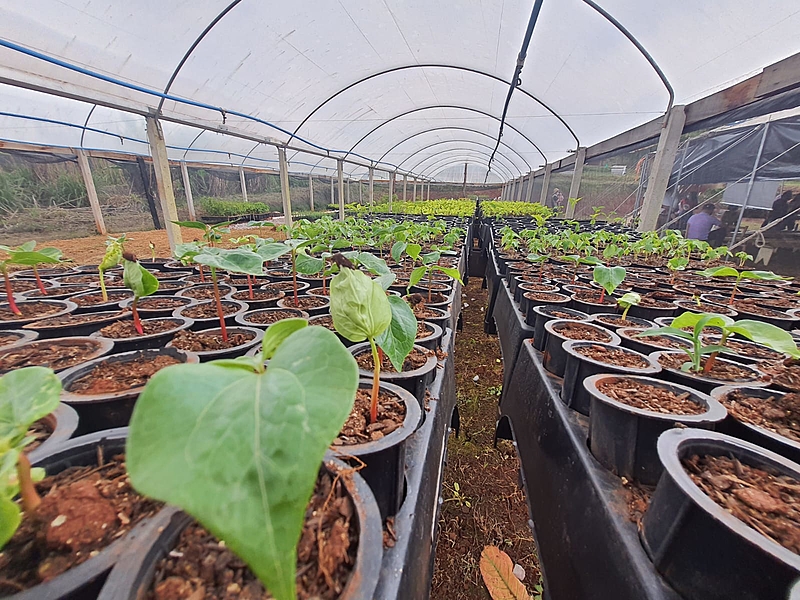 The nursery coordinator, Marlon Rodrigues Fragas, presented the nursery, highlighting the structure in its different angles of interpretation, from the technical to the pedagogical aspects, from the concrete objectives to the political dimension. “Of the 100 million trees that the MST proposes to plant and care for in Brazil, 7 million must be here in RS and this nursery is part of this context, it is a bold goal, as are our struggles and our achievements” , declared.

The Zecão Popular Agrarian Reform Nursery starts with a production area of ​​25 x 10 meters and capacity to produce 25,000 seedlings per year. When the entire planned structure is assembled and the designated area is fully utilized, the coordinator’s expectation is that the number of 100 thousand seedlings/year will be reached, prioritizing native species from the Atlantic Forest.

“We want this nursery not only to produce seedlings, but to be ‘popular’ in the most practical sense, for technical and scientific experiments to be developed here, for it to involve the community, settlers and campers, especially the youth,” added Fragas. He explained that all the elements of the production chain will be developed there – starting with the substrate, passing through the collection and processing of seeds, to the consolidation of the seedlings to the point of being introduced into nature.

:: Get to know Finapop, an unprecedented financing project for small farmers :: 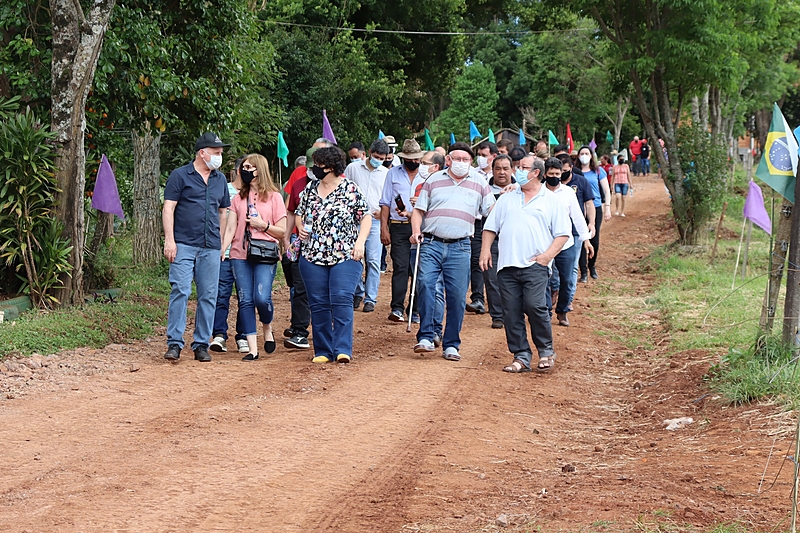 Cedenir de Oliveira, from the national board of the MST, highlighted the importance of the day – for the commemoration of 36 years of occupation of the Annoni Farm, for the inauguration of the nursery, for the homage paid to comrade Zecão, but also for the moment of resuming collective actions after more than a year of recall because of the coronavirus pandemic. “This project goes beyond the production of seedlings, it is not just stimulating a perspective of technical production, but expressing a political and philosophical elaboration of what the new context of the struggle for Agrarian Reform in this country should be”, he explained. For Oliveira, it is necessary to change the country’s land structures, but that alone will not be enough, pointing to the current agricultural production model that does not produce food, on the contrary, it produces concentration, misery and environmental devastation. “To carry out Agrarian Reform is to take care of the environment and produce healthy food.”

:: Roçado Solidário of the MST unites countryside and city against hunger in the Metropolitan Region of Recife ::

State deputy Edegar Pretto highlighted the actions of the MST and other popular movements in the state and said in a particular way to the Agrarian Reform territory: “These activities that take place here in Pontão have a very special symbol, they are actions that recover the environment and they preserve native species, reinforcing environmental education, helping to regenerate nature and encouraging the production of healthy food”. Pretto highlighted the commitment of the movements to “working for a different country, without destroying the environment, without people going hungry” and concluded by stating that each tree planted means the hope of a better country. 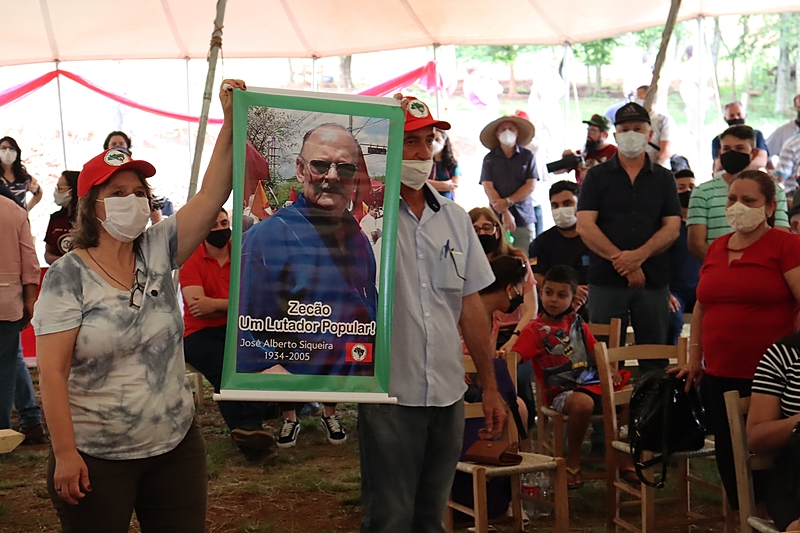 Zecão was present in the images, in the memory and in the continuity of the struggle undertaken by those present / Corbari/BdF-RS

José Alberto Siqueira, known as Zecão, a character whose name was assigned to the newly opened nursery, was praised by those present and many remembered memories. His militancy committed to the working class, together with the PCdoB and PT parties, as well as the leading role in the construction of movements such as the MST and MPA, as well as in the organization of the trade union movement and the Pastoral Land Commission in the region, were facts cited in the pronouncements . “Comrade Zecão was an example of a militant and political leader, but, above all, an extraordinary human being”, he quoted Frei Sérgio Görgen.

:: “We cannot expect from the CPI on the Pandemic what is our militant task: to organize the people” ::

Federal deputies Marcon and Bohn Gass followed in the same direction, praising the memory and legacy of the honored comrade. “Here today, if Zecão could speak, he would send us to take some seedlings home and plant, he would challenge us to do our part to counter Bolsonaro’s death project with the life preservation project that has been developed by the MST and by the other workers in Brazil”, quoted Marcon. “Zecão is a reference for all of us in the struggle for Agrarian Reform, he is a living memory, he is a companion whose memory is still present in our struggle every day”.

Visibly moved, speaking on behalf of the honoree’s relatives, Antonio Marangon defined Zecão as a complete militant: “He did not charge the other to do a task he himself could not or was not willing to do, he taught by example, he did the work kid with discipline, he helped people to organize themselves, he was there, always together, at the time of organization, training and action”. Maragon also recalled that Zecão did not accept that anyone took the lead from the people, he knew that if the people are not the protagonists of what they do, they will never be freed. 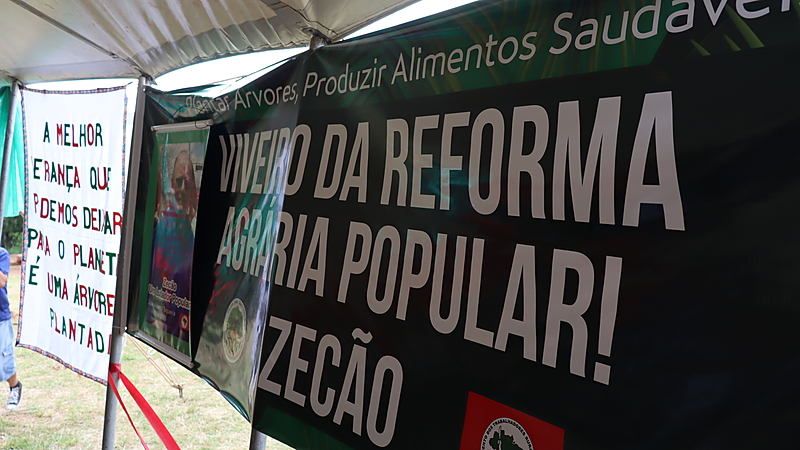 After an afternoon of so much symbolism, the challenge of keeping the legacy beyond memory, as a permanent instrument of struggle continues / Corbari/BdF-RS

The fight goes on!

In Greece, COVID anti-record since the beginning of the pandemic