After awarding his wife twice, Bolsonaro awards himself Medal of Scientific Merit

President Jair Bolsonaro (non-party) decorated and presented himself with the medal of the National Order of Scientific Merit, in the class of the Grand Cross, the highest of the honorific commendation. The self-homage was made official by a presidential decree dated last Wednesday (3), published on Thursday in the Diário Oficial da União.

The National Order of Scientific Merit is an honorary order granted to Brazilian and foreign personalities as a form of recognition for their scientific and technical contributions to the development of science in Brazil. The presidential decree does not say what contributions by Bolsonaro justified the honor.

::in June of this year: Bolsonaro decorates Army commander after acquittal of Eduardo Pazuello::

In the same decree, a series of other personalities from the political world, such as the ministers of state Paulo Guedes (Economy), Milton Ribeiro (Education), Marcos Pontes (Science and Technology) and Carlos Alberto França (Foreign Affairs), in addition to the former federal deputy Diego Viella (MDB-GO) and the senator Daniella Ribeiro (PP-PB), among others. Nor does the president’s decree contain the reasons for the decoration of these politicians.

Also in the same batch of medals awarded by Bolsonaro, there are professors from several public universities in the country. Among them is epemiologist Cesar Victora, professor emeritus at UFPel (Federal University of Pelotas), winner of the Richard Doll 2021 Award, the main world recognition granted by the International Association of Epidemiology (IEA, its acronym in English).

The academic is a well-known critic of the Bolsonaro government and of the way the president tried to lead the fight against the new coronavirus pandemic in Brazil.

In June of this year, in an interview with the portal UOL, Victora was asked about the main mistakes made by the country in fighting covid. His answer was:

“The main error is the denial expressed very well by the President of the Republic. The denial made Brazil not try to contain the epidemic at the beginning.” In the same interview, he said: “I believe we have the first president in the world to say that he is not going to get vaccinated. Nobody wants to help a country that does not want to help itself. Our country has become an outcast.”

Bolsonaro has already given medals to Michelle Bolsonaro, Arthur Lira and the general who acquitted Pazuello 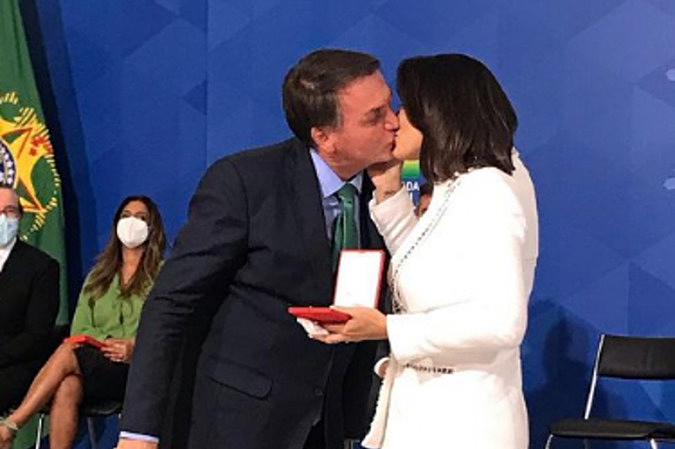 August 5, 2021: Bolsonaro presents the second medal awarded to his wife / Presidency of the Republic – Disclosure

In June of this year, after being acquitted by the Army top General Eduardo Pazuello, former minister of Health, for participating in a political act in Rio de Janeiro, Jair Bolsonaro awarded the Army commander, General Paulo Sérgio Nogueira de Oliveira with the Great Cross of the Defense Merit Order.

The general’s promotion to order was made by decree of the 7th of that month. Besides him, Chancellor Carlos Alberto de Franco França, who replaced Ernesto Araújo at Itamaraty, and General Luiz Carlos Gomes de Mattos, President of the Superior Military Tribunal, in addition to six other soldiers, received the award.

Also in the same decree, Bolsonaro awarded his wife, Michelle de Paula Firmo Reinaldo Bolsonaro, with the degree of Grand Officer of the Defense Merit Order. The president of the Chamber of Deputies, Arthur Lira (PP-AL), was also listed as one of the recipients of the Gran Cruz.

On the 5th of August of this year, the award of medals for the Oswaldo Cruz Merit and the Order of Medical Merit was held at the Planalto Palace.

The awards are part of the recognition for outstanding performance in the field of scientific, educational, cultural and administrative activities for the beneficial results to the health of Brazilians.

The Medal of the Order of Medical Merit, on the other hand, was given to the doctors who “saved the life” of Bolsonaro, after a stab wound he suffered while campaigning.

Cefet unit in Petrópolis, RJ, has open enrollment for a postgraduate course

Sexual harassment at Caixa: servers fear for the safety of whistleblowers against Guimarães

Niterói, in RJ, has the first Legal Clinic in the country focused on the LGBTQIA+ population