At least two weeks ago, miners invaded the Madeira River, near the Rosarinho community, in Autazes (AM), after rumors that the region is rich in gold. With this, a kind of floating city with approximately 300 rafts, pushers and dredgers was installed on the site to practice illegal extraction of ore. For Rafael Modesto, from the Legal Advisory of the Indigenous Missionary Council (CIMI), the action contains a set of illegalities.

“Gold exploration is extremely harmful and causes damage to the environment, including the risk of mercury contamination and there is no inspection so far, as far as we know, in the region. So, in addition to exploration, there must also be crimes such as smuggling, slave labor, drug trafficking, but the main one is the crime against environmental legislation, the crime against Brazilian public property, against the Madeira River, against riverside communities and the local population,” he says.

Illegal mining is a common practice in the region, however, the installation of the floating city in the last two weeks was due to the information circulating among the miners that there would be gold in that specific stretch.

The municipality of Autazes has a population of just over 41 thousand people, according to an estimate by the Brazilian Institute of Geography and Statistics (IBGE) and is located about 110 kilometers from Manaus, capital of Amazonas.

In this type of activity, the collected material is filtered and the water is returned to the river. In addition to being illegal, the work carried out by the dredgers pollutes and directly impacts the environment and riverside and indigenous communities.

Rafael Modesto says that CIMI, together with Greenpeace and other entities that defend human rights and the environment, are articulated so that the miners are removed from the site.

::Understand how illegal mining happens on indigenous lands in the North of Brazil::

“We are demanding measures from the Federal Public Ministry (MPF), the Brazilian Institute for the Environment and Natural Resources (IBAMA) and the Federal Police so that they can inspect and carry out a stampede operation so that those rafts and dredgers are removed and when not can be withdrawn are destroyed”. 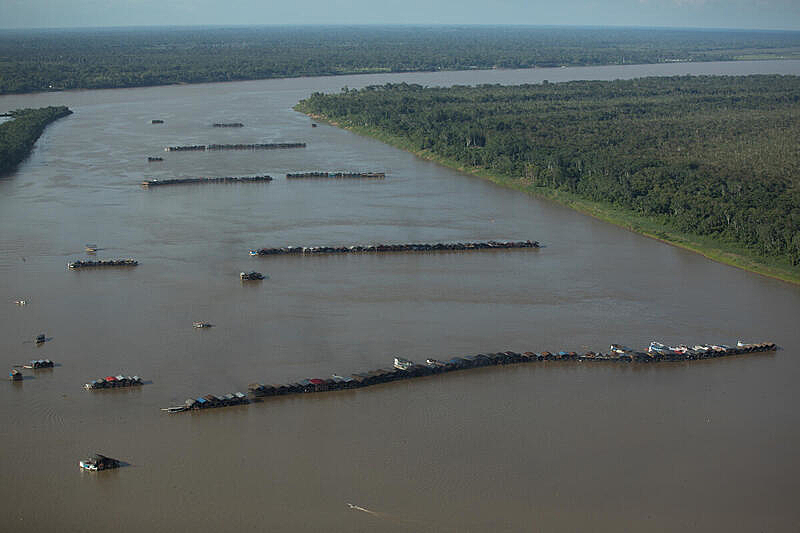 Mining is done using dredges, equipment that dig the riverbed in search of ore / Bruno Kelly/Greenpeace

The risk to biodiversity and local populations

Danicley Aguiar, spokesperson for the Greenpeace Amazon campaign, points out that in addition to the crimes cited by Rafael Modesto, there is also the fact that there is a risk to the health of the populations that live there along the Madeira River.

“This is one of the most important rivers in the Amazon, a source of biodiversity, especially for fish, which feeds a large part of the population, whether in the city of Porto Velho (RO) or even in the city of Manaus, as well as the smaller towns along the river channel. Madeira River. In this river there are at least 1,000 species of fish already identified, and its basin contributes with 50% of the total load of suspended sediments transported by the Amazon River”, he summarizes.

In his opinion, mining has become a pest that needs to be fought. “Illegal mining happens recurrently in the Baixo Madeira region up to the state of Rondônia. In January 2021, Rondônia authorized and regulated the practice in its territory, in addition to revoking a decree that prohibited the extraction of ore in the Madeira River, in the stretch of the border with Amazonas, where the practice is still illegal”, he explains.

In August of this year, the Federal Court condemned the Institute for Environmental Protection of Amazonas (Ipaam) to annul several licenses granted irregularly for the extraction of gold in the Madeira River. The Court alleged a lack of studies that present the environmental impact before the granting of authorizations, mainly on the environmental damage caused by the use of mercury in these activities.

“Unfortunately, this type of activity has become a plague in the region, mining has become an epidemic, it has a whole narrative, a political license that has been built by the governments of the State of Amazonas and Rondônia and that is associated with the narrative of the presidency of the republic. , which encourages the advancement of this economy of destruction in the Amazon. It is regrettable that the law has become the exception rather than the rule, and what is being asked is that the federal and state authorities act to prevent this type of activity from spreading throughout the entire region. Rio Madeira”, he concludes.