In one of the villages of India, monkeys killed 250 dogs 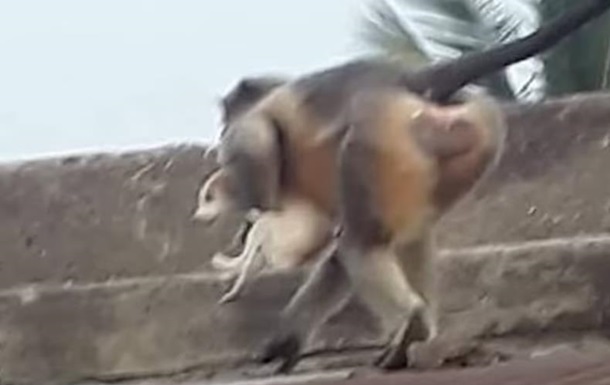 Monkeys exterminate all dogs in the village of Loveul

The conflict between the animals broke out in mid-November after the dogs killed the baby monkeys.

In the central Indian state of Maharashtra, monkeys waged war with dogs in the village of Lavul and exterminated them all. It is reported by Daily Mail Friday, December 17th.

It is stated that the conflict between the animals broke out in mid-November after the dogs killed the baby monkeys. The very next day, primates began attacking dogs and puppies – grabbing them, dragging them onto the roofs of houses and throwing them down.

In just a month, the monkeys killed 250 pets, leaving no dogs left in Lavoul. The villagers turned to the Forestry Department with a demand to catch the killer monkeys and take control of the situation, but the police sent to the village could not catch a single animal.

After that, the inhabitants of Lavoul tried to defend the dogs themselves, but the monkeys pushed several men from the rooftops, who were trying to get to them.

Moreover, the monkeys began to attack the children, probably in retaliation for the attempts of humans to stop the reprisals against dogs. There is a known case when primates pounced on an eight-year-old schoolboy, whom they managed to repulse only with the efforts of several men. Attacks on people in Lavoul continue now.

Recall that in the Indian city of Tanjavur, wild monkeys kidnapped two newborn twins from their home. One of them was later found dead, the other was rescued.

And in the Japanese city of Fukui, three retirees learned to shoot in order to begin the fight against primates that eat fruits on their plantations.

Arrests and torture of women in Donbass. Study