The government of President Jair Bolsonaro (PL) “declared war on federal civil servants who do not wear uniforms”. The finding is from unions, associations and forums that bring together workers from the federal public service.

In protest against the adjustment granted in the 2022 Budget only to professionals from the Federal Police, several groups of employees of the Federal Executive have mobilized to build a strike at the beginning of 2022. 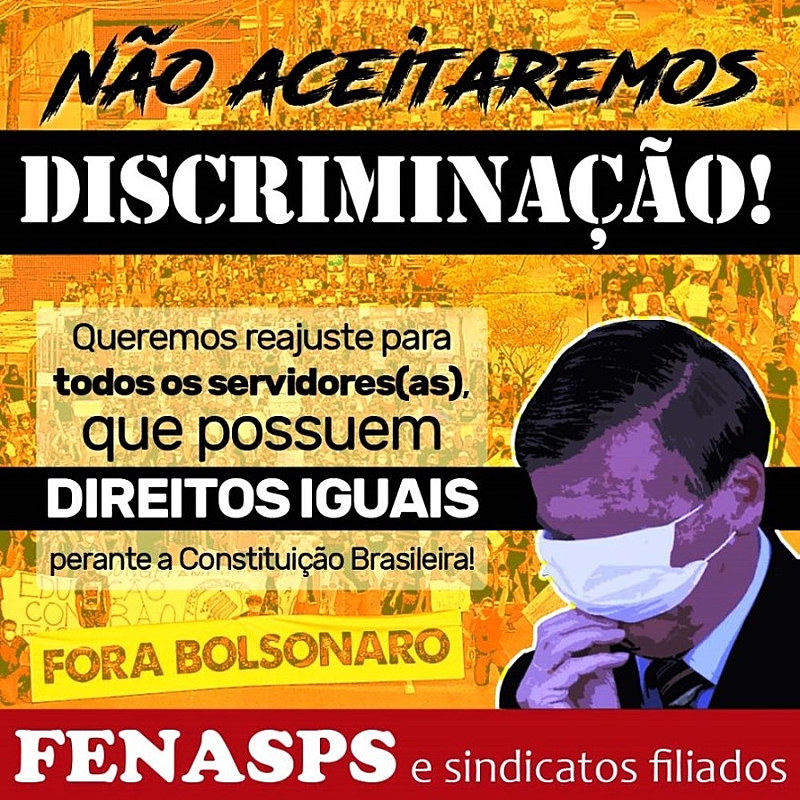 “We will not accept discrimination”, says poster to publicize the mobilization for the strike in 2022 / Reproduction/Fenasps

Information from Inter-Union Department of Statistics and Socioeconomic Studies (Dieese) point out that federal employees had 50% of wage losses and had not had a readjustment in the last five years.

The complaints against the reserve of R$ 1.7 billion in the Budget to benefit police officers, reached several sectors of the civil service, including servers in areas such as tax, health, diplomacy, monetary policy and the Public Ministry.

Entities like a Fonacate (National Forum for Typical State Careers) it’s at National Federation of Workers’ Unions in Health, Labour, Welfare and Social Assistance (Fenasps) have already held public demonstrations on the subject.

“In 2022 the challenges will be immense, starting with the urgent need to build the General Strike to defeat this project to freeze wages and dismantle public services, only in the unity and struggle of all will we defeat this Nazi-fascist government,” said Fenasps, in communicated.

::: Delivery of positions at the Federal Revenue, Capes and Inep: the year the Bolsonaro government broke up :::

The placements are added to the movement initiated by the Federal Revenue, in which servers approved an indication of stoppage of activities, standard operation in customs, zero goal (when activities are not completed) and not filling out management reports.

Requests for exemption from the Revenue reached 635 and now reach the Administrative Council of Tax Appeals (CARF), which lost 44 directors. According to National Union of Tax Auditors of the Federal Revenue of Brazil (Sindifisco), Brazil has 7,950 auditors, 6,071 of which are analysts and 2,938 in commissioned functions, that is, who are not career servants.

Requests for dismissal from senior positions do not mean that employees have abandoned their careers. Only the command post remains vacant, which means the suspension, in the case of Carf, of several appeal judgments analyzed by the agency. In a statement, the union of the category announced that it could culminate in the complete strike of servers.