A study by the Federal University of Santa Maria (UFSM), developed since 2015, shows that the Pampa’s natural pasture, when properly managed, can offset the methane emissions produced by cattle through the absorption of carbon dioxide (CO2) by the pasture. In other words, the Pampa is a potential absorber of greenhouse gases (GHG) when rotational management is used in livestock.

The Pampa is located in just one state, Rio Grande do Sul, according to the Brazilian Agricultural Research Corporation (Embrapa). Characterized by a temperate climate, great plant biodiversity and an extensive area of ​​natural fields, mainly grasses, the Pampa occupies about two-thirds of the state’s territory and is at risk of disappearing due to export agriculture, such as soybeans.

The study that attests that the Pampa works as a GHG drain was carried out by the UFSM Micrometeorology Laboratory and coordinated by the professor of the Physics Department, Débora Regina Roberti. From the collection of data on the exchange of carbon and methane in ecosystems, the group of researchers coordinated by the researcher concluded that the Pampa biome, under adequate management conditions, works as a kind of drain for greenhouse gases.

Strategy for reducing the emission of greenhouse gases

According to the research, the combination between the climate and the unique characteristics of the landscape contribute to the proper management of livestock, which can help in the development of strategies to reduce the emission of greenhouse gases into the atmosphere. Mitigation of these gases is important to curb the planet’s global warming process, which has among its consequences the increase in global temperature, which can cause glaciers to melt, sea level rise, decrease in fresh water for human consumption, extinction of species and climate impacts.

Débora explains that, during the winter, when there is less growth of pastures, the Pampa emits more carbon dioxide (CO2) than it absorbs. However, the amount of absorption of gases in summer offsets the emission of winter and, on an annual average, the site works as a CO2 absorber. 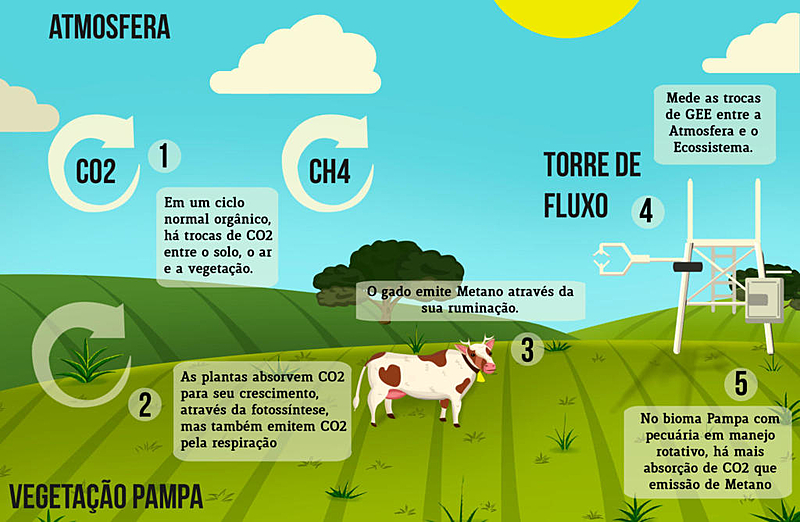 As for methane, the professor emphasizes that, although emitted by cattle through rumination, the biome’s vegetation – through photosynthesis – manages to absorb, in amount of CO2, twice the amount of methane emission. Due to its size, the Pampa has the potential to absorb more than 1 million carbon credits, the equivalent of 1 million tons of CO2 equivalent. Débora emphasizes that this does not mean that in other biomes and in other types of soil and animal management there is no greater GHG emissions.

The importance of the study is to demonstrate alternatives and strategies that make it possible to mitigate the emission of greenhouse gases in other environments as well. Débora comments that the intention is to carry out more studies in other places, so that the measures are expanded and allow for greater knowledge about other realities. Thus, the intention is to develop adequate mitigation strategies for each area.

:: Entity denounces the government of Rio Grande do Sul for failure to protect the Pampa ::

Fernando Quadros, professor at the Department of Animal Science and researcher in the area of ​​Ecology and Management of Natural Pastures, participates in the study coordinated by Débora and is responsible for the management area of ​​the Long-Term Ecological Research Program (PELD) Campos Sulinos at UFSM.

The research includes the presence of cattle in the grazing fields and the proper handling of the animals, in which the strategy used is that of rotational grazing, in which paddocks are rotated. The animals feed in one area for a certain period of time, and then move to the next, so that the pasture has time to sprout and grow in a natural way.

The system differs from continuous grazing, in which the animals remain all the time in the same paddocks – which delimit areas of division of the pasture by means of fences – and the amount, height and volume of available pasture are controlled.

The researcher comments that the alternative is based on the great diversity of herbaceous vegetation existing in the Pampa – around 3,000 cataloged species. Of the various botanical families, the ones with the greatest number of species are grasses, asteraceae and fabáceas (legumes).

:: Pampa is the Brazilian biome that loses the most natural vegetation, study alerts::

Another division of species concerns the storage capacity of resources. Fabaceas are fundraisers, that is, from energy resources such as CO2, they grow faster; however, the resource stays alive in the plant for a shorter time. Grasses and Asteraceas are resource-conserving. Since they grow more slowly, the capture of resources such as carbon dioxide, oxygen and other nutrients remain in the plant structure longer.

Based on this understanding, an adequate management strategy was developed in order to adapt to the different growth rates of the two large groups of species. With this criterion, according to Fernando, it is possible to let the plants grow and insert the animals for new grazing in the same area only when the rest time for the paddock is complete. Thus, it is possible to maintain a greater volume of mass than in places where continuous grazing is applied.

* With information from UFSM Press Office