In the first days of 2022, protests spread throughout Kazakhstan, initially stimulated by a fuel price rise, causing an unprecedented crisis in Central Asia’s largest country. The soaring tensions resulted in clashes between demonstrators and security forces, attacks on government buildings, and, according to recent data, 164 people killed. The authorities declared a state of emergency in the country until January 19.

Claiming “terrorist threat”, Kazakhstan’s current president Kasim-Jomart Tokayev asked for support from the Collective Security Treaty Organization (CSTO), which sent a total of 2,500 troops, most of them from Russia, to normalize the country’s situation.

CSTO was created in 2002 based on an old collective security agreement between the Commonwealth of Independent States (CIS), adopted in 1992 (soon after the collapse of the USSR), to resemble NATO’S framework or the former Warsaw Pact. Currently, it is formed by Armenia, Belarus, Kazakhstan, Kyrgyzstan, Russia, and Tajikistan.

Last Wednesday (12), the Kazakh president stated that the CSTO’s main mission “was concluded”, informing about the troops’ gradual withdrawal. He said the CSTO is a “peacekeeping contingent”.

While Kazakhstan seeks to recover its internal stability, in the regional and international scenario the country’s crisis already has significant geopolitical effects. That is what says the deputy director of the Institute of History and Politics of Moscow State Pedagogical University, Vladimir Shapovalov. In an interview to Brasil de Fato, he points out that the CSTO’s operation in Kazakhstan set a great precedent not only in the post-Soviet arena, but in Eurasia as a whole: “a third military alliance has emerged in the world”, he said. 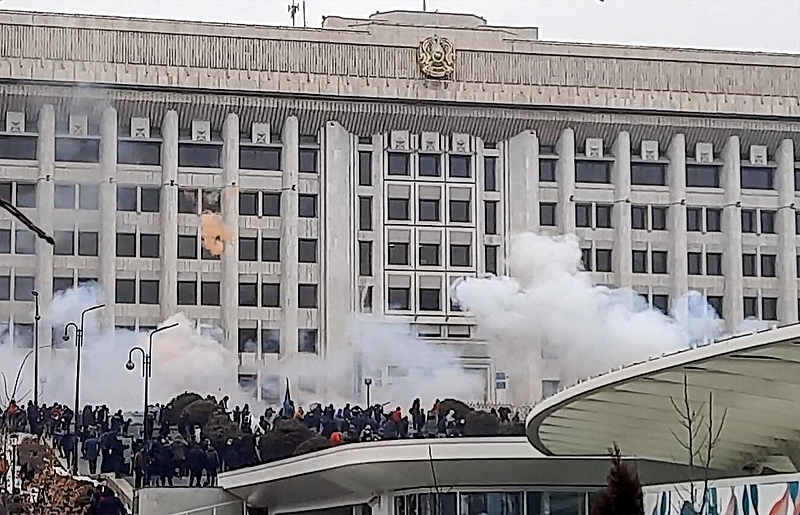 Protests burst in the city of Almaty, Kazakhstan, and a government building is hit in January, 2022 / AFP

Shapovalov highlights that until recently, CSTO was treated skeptically, being seen in Russia and abroad as a formal structure of existence, however, unprepared to carry out certain functions. Now, with the operability to mobilize troops faster and with unanimous adherence, CSTO emerges as a new military alliance, competing with the Gulf Cooperation Council (GCC) and, mainly, with NATO.

“The CSTO peace operations generated an absolutely new situation, not only in the post-Soviet arena, but also in Eurasia as a whole, since it shows how prepared the members are to act fast and effectively. That is what I see as the main result of the Kazakhstan crisis”, he states.

Fear of a new “Color Revolution”

Located in the border region between Russia and China, Kazakhstan is Central Asia’s largest country and an important ally of Moscow in both the economic area – with huge investments in oil and uranium extraction – and the aerospace sector (Baikonur space base is in Kazakh territory, which was rented by Russia).

Therefore, it is far from good for Russia to have an unstable and chaotic scenario in Kazakhstan. That is why a Moscow-led fast resolution was taken to send CSTO troops to stabilize the situation of Russia’s neighboring country.

Political strategist and head of the political consultancy agency Ignatov Consulting, Alexey Ignatov told Brasil de Fato that Kazakhstan is traditionally included in Moscow’s “sphere of influence”. Therefore, it is not in Russia’s national interest to let the current internal situation of its neighboring country “go its own course”.

According to Ignatov, the immediate Russian reaction to the events in Kazakhstan – with the use of a strong military contingent through CSTO – is, above all, “a wave to its foreign ‘partners’ and its internal ‘representatives’ in Russia”.

He also said that the main concern Russia has with the Kazakh crisis is the beginning of a new “Color Revolution”, a term attributed to Western-friendly political manifestations in the territory of the former USSR republics.

“The sign is simple and unmistakable: authorities will not allow any ‘Color Revolution’ in Russia. They will also act decisively and rapidly in the foreign arena”, Ignatov highlights.

In the last years, the most emblematic case of instability in Russia’s sphere of influence is Ukraine. In 2014, protests against the Moscow-friendly government and in favor of the West resulted in a coup that divided the country, causing a civil war. The Ukrainian crisis was the trigger to deteriorate the relations between Russia and the West. Moscow and Washington blame each other for interfering with the politics of Eastern European countries and destabilize Ukraine.

During the CSTO summit, President Vladimir Putin stated that “Maidan” similar methods were used to deal with the chaos in Kazakhstan, referring to the protests at Maidan Square in Kiev, which resulted in the Ucranian crisis of 2014.

Alexey Ignatov points out that one of the most unique aspects of Moscow’s action on the Kazakhstan crisis is that Russia had probably learned (following the American example) to use the mechanism of foreign support to its own actions, besides defending its interests.

“The United States Always hides all its operations in every country of the world behind some general decisions on ‘progressive humanity’: through actions carried out by NATO or many international coalitions of some countries. Russia used the mechanism of CSTO to introduce a peacekeeping military contingent from different countries with the obvious leading role of Russians”, he argues.

The crisis is also an opportunity to Russia

Consequently, the unprecedented operability of mobilizing a CSTO contingent in a fast and efficient way seems to be, at the same time, an opportunity for Russia to play its cards in the international arena and to reinforce a counterbalance to the performance of NATO in the post-Soviet territory. 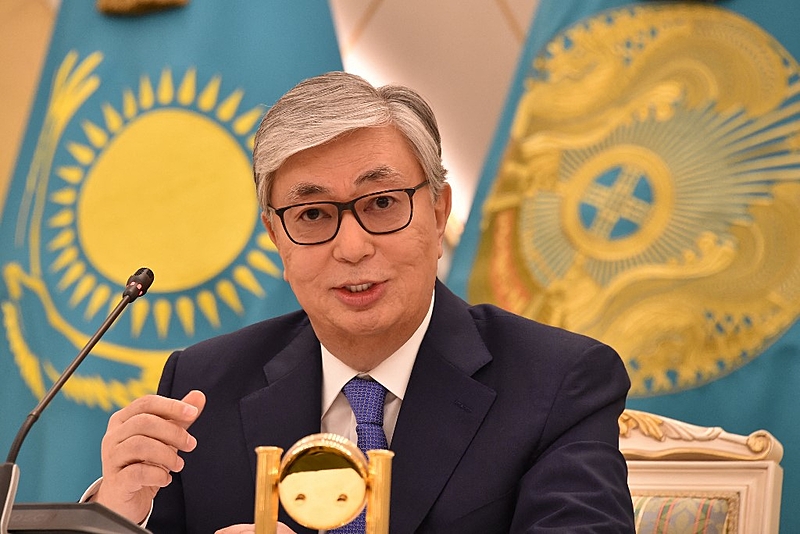 “On the one hand, Russia demands NATO to stop and retreat; on the other hand, the country demonstrates its capacity for quick reaction and collective actions on the part of its military alliance. With this attitude, Russia says: ‘look, we have our military alliance'”, he adds.

The Moscow-led operation did not go by unnoticed in Washington and roused criticisms by the US Secretary of State, who affirmed that Kazakhstan could have difficulties to be free from the Russian troops: “A lesson from the recent history is that, since the Russians are at your home, sometimes is very difficult to make them get out of it”, said Antony Blinken.

The Russian Foreign Ministry, for its part, called Blinken’s comment as “typically offensive”, adding that the US should analyze its own history of interventions in countries such as Vietnam and Iraq: “This is taught to us not only by the recent past but for the entire 300 years of the existence of an American state,” the Russian ministry published.

To political scientist Vladimir Shapovalov, the precedent set by the CSTO troops operation in Kazakhstan is also about the fact that, until recently, “the US has always acted as the world’s police force, and they didn’t do very well in that role, allowing a lot of arbitrariness.” At the same time, Shapovalov says that there was no alternative to playing this role during crises and conflicts around the world. “Now this alternative exists – the CSTO”, he adds.