Russian activity on the border of Ukraine and in the Baltic Sea forced Stockholm to increase its combat readiness.

The Swedish Armed Forces are raising the alert of the aggravation on the border between Ukraine and Russia, as well as the increased activity of Russian warships in the Baltic Sea. An attack on Sweden cannot be ruled out, Defense Minister Peter Hultqvist explained. Korrespondent.net tells the details.

“There are reasons to take certain types of action”

The tense atmosphere in the field of security policy has forced the Swedish armed forces to engage in “adaptation of combat readiness” in several parts of the country, writes the Swedish public broadcaster SVT.

So, an operational special unit was sent to the island of Gotland in the Baltic Sea. The Ministry of Defense of the country called this decision “Swedish’s reaction to the aggravation in relations between the Russian Federation and Ukraine” and against the background of the growth of Russian military activity in the Baltic Sea. Gotland is located about 330 kilometers from Kaliningrad.

SVT posted footage on its website showing troops and equipment arriving on the island. The head of the Gotland Regiment, Matthias Ardin, confirmed that we are talking about about “a dozen combat vehicles”, some of them are already patrolling the harbor.

⭕️🇸🇪#Sweden( #Sweden) :military strengthens its presence on #Gotland island, due to the 🇷🇺#Russia|n threat! pic.twitter.com/MVxlhL4AGP

“The armed forces are taking the necessary measures to maintain the integrity of Sweden and demonstrate our ability to protect Sweden and Swedish interests,” Defense Minister Peter Hultqvist said.

The increased patrols on Gotland are a sign that Stockholm is taking the situation seriously and “will not be taken by surprise,” Swedish news agency TT quoted Hultqvist as saying. The Swedish Armed Forces noted that “operations have been strengthened in several places.”

The day before, the Danish media reported on three ships of the Russian Navy that entered the Baltic Sea through the Danish Strait of the Great Belt.

Swedish Gripen planes, as well as planes from other countries, have been following these ships, which arrived from the Kola Peninsula, for some time, Swedish newspaper Svenska Dagbladet notes.

Mikael Claesson, head of operations for the Swedish armed forces, told the publication that the way events unfolded in recent months, including the mobilization of Russian troops on the border with Ukraine, did not contribute to improving the security situation near Sweden.

News agency TT reported that the military has become much more visible in everyday life – for example, soldiers are now patrolling the streets of Gotland’s largest city, Visby. “We are taking action in many areas of the country – some are more visible, some are not. We are talking about air, sea and ground troops,” Claesson explained. 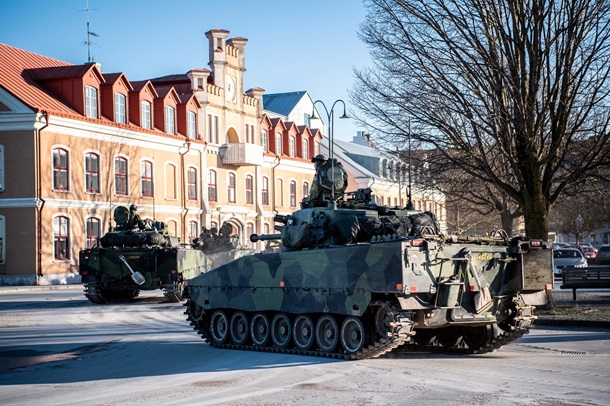 The military patrols the city of Visby / ANDREAS BARDELL

“An attack on Sweden cannot be ruled out, and therefore we are taking measures to increase combat readiness. In our opinion, this is reasonable, as it signals the defense capability of Sweden,” the defense minister explained in an interview with SVT.

According to the publication, Hultkvist does not want to tell why it was decided to move troops right now, but nevertheless made it clear that the decision was justified by the tense situation between Ukraine and Russia.

“What kind of signals we are giving, I won’t go into details, but I can state that there are reasons to take certain types of measures,” he said. Note that after the annexation by Russia, Sweden reintroduced conscription.

Last week there was a cyberattack on many Ukrainian government websites. Cyber ​​attacks against Sweden are also regularly carried out, says the defense minister, who emphasizes, however, that their scale is not at all the same as in the case of Ukraine.

“Approximately 100,000 cases of cyber activity directed against Sweden are recorded per year. We regularly counteract this and are constantly working to improve the protection of our cyber systems,” he said.

In early January, Hultqvist said that Russia had defied international law by demanding that Ukraine not be admitted to NATO. Thus, Moscow called into question the right of other countries to self-determination, the Swedish Defense Minister stressed.

According to Hultkvist, Stockholm should cooperate more actively with NATO, which, together with the European Union, serves as “the most important security platform.”

Against this background, former NATO Secretary General Anders Fogh Rasmussen said that Finland and Sweden will be able to join the alliance the day after the request is submitted. “If Finland and Sweden apply to join, we can make a decision instantly,” he told Finnish broadcaster Yle.

The political opposition had previously demanded that Sweden publicly declare a so-called “option to join NATO”. In parliament, the majority of members are also in favor of membership in the organization, writes SVT. However, Hultqvist argues that this is not relevant.

Finland also says that they do not plan to join NATO, although they “reserve such a right.”

At the end of December, Russian Foreign Ministry spokeswoman Maria Zakharova threatened that the entry of Sweden and Finland into NATO “would have serious military and political consequences that would require adequate steps from the Russian side.”