The National Liberation Army (ELN) assures that the audio released in recent days days about sending troops to Venezuelan territory to “ensure the security of the country” and “combat the FARC militiamen” would be a setup. In the message, an alleged leader of the Colombian guerrilla said that the ELN has been operating in Venezuela for 37 years and that the current war would be against the FARC, so the Venezuelans should not interfere.

In an exclusive interview with Brazil de facto, Commander Aureliano Carbonell affirmed that it is a setup to “generate tensions and destabilize the border region” between Colombia and Venezuela, and accuses the Colombian State of being behind the false evidence.

Since last Sunday the 16th, both the Colombian and Venezuelan governments have sent military personnel and weapons of war to the border between the department of Arauca (Colombia) and Apure (Venezuela).

President Iván Duque announced last Sunday the deployment of 700 more soldiers in the Arauquita region to contain the armed conflict that would have caused the displacement of 170 families, including former combatants.

On the Venezuelan side, the number of troops was not confirmed, but the command of the Bolivarian National Armed Forces (Fanb) also announced reinforcements with soldiers and even combat planes to prevent the presence of some 50 ELN soldiers in the Venezuelan municipality of José Antonio Páez, Gabarra region. 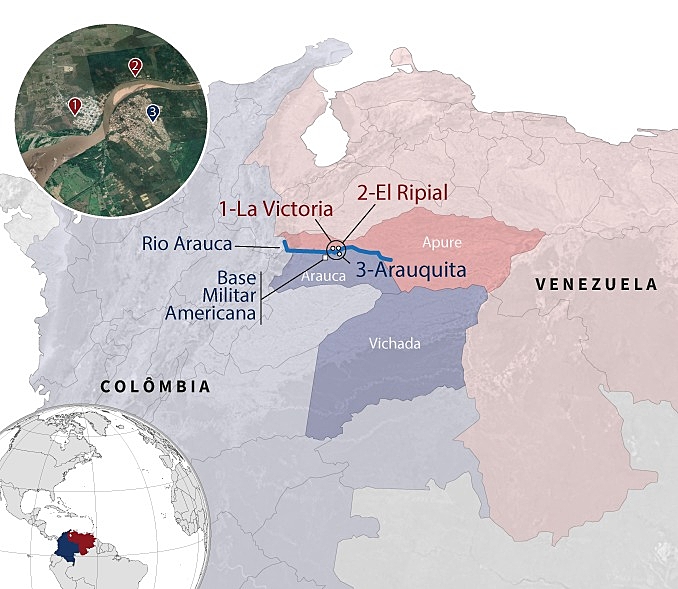 With the signing of the Peace Agreements, in 2016, majority sectors of the Revolutionary Armed Forces of Colombia – People’s Army (FARC-EP) agreed to lay down their arms and be part of the process of reintegration into civil society.

However, a dozen scattered groups in different regions of the country refused to participate in the process and organized themselves into armed dissidents.

“This is not a confrontation between the ELN and the FARC sectors that sat down to establish the Peace Agreement. It is something very specific with a group led by Arturo Paz, who is also called Jerônimo, who declares himself a member of the FARC , but it is working with the Colombian government and creating difficulties on the border,” said Aureliano Carbonell. 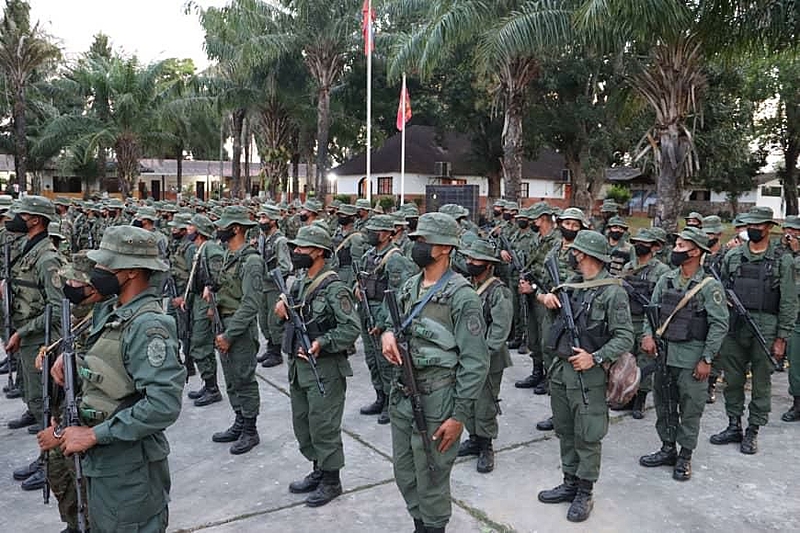 The Bolivarian National Armed Forces (FANB) sent special troops, warplanes and weapons to reinforce security on the border between Apure and Arauca / FANB

The Colombian guerrilla commander said that, in the last year, with the economic difficulties generated by the pandemic and the abandonment of the implementation of the Peace Accords by the Colombian government, illegal crops have resumed in the department of Arauca, promoted by irregular groups. Always according to Carbonelli, the 10th Front led by Arturo Paz would be one of these groups.

“Among other problems is the cultivation of coca. We see it as a setback. That is what caused all the problems in Arauca. After the process of illicit substitution, Arauca became an important producer of cocoa and bananas. Despite the immense difficulties of life in the Colombian countryside, it was possible to generate this dynamic of agricultural production and this is very positive,” he said.

The Arauca River, which extends along the Colombian-Venezuelan border for 296 km, would be the only natural barrier between the Colombian department of the same name and the state of Apure, and is a region of free movement between the populations of the two countries, despite the rupture of diplomatic relations in 2010.

“We believe that there are also interests in creating difficulties on the other side of the border. It is an area that does not have large coca crops, but if they manage to increase production there, they will use it as an element to attack Venezuela,” Carbonell warned.

Colombia is considered the largest producer of cocaine in the world, with some 171 thousand cultivated hectares, which supply approximately 70% of the world market, according to reports of United Nations. Others independent studies They indicate that around 2% of Colombia’s GDP, equivalent to 19,000 million dollars (about 95 billion reais), is the result of drug trafficking.

One consequence of drug trafficking is the increase in violence. The UN points out that 80% of homicide victims in 2019 lived in coca-producing areas.

The Colombian media even suggested that the ELN also intends to control part of Venezuelan territory. This is because there would be a dispute with the Patriotic Forces of National Liberation (FPLN), a Venezuelan guerrilla linked to the Bolívar and Zamora Revolutionary Movement (CRBZ), which controls the Simón Bolívar Communal City, in the Gabarra region.

The ELN denies any hostility towards Venezuelan political organizations and is willing to “resolve confusion and dialogue with whom it may concern.”

“The problem is in Colombia, but obviously it also has repercussions in Venezuela. We are open to clarifying any situation. Our interest is not to generate any difficulties on the Venezuelan side, neither with the population nor with the Armed Forces,” said the guerrilla commander. Colombian.

In the Venezuelan municipality of José Antonio Páez, Mayor José María Romero, a member of the Bolívar and Zamora Revolutionary Movement and PSUV leader, once again rejected what he considers to be the “export of the Colombian armed conflict.”

“The Colombian government tries to export its model of drug trafficking and war. We observe how government figures visit the department of Arauca, at least for the media they talk about sending soldiers, but what they really want is to export the war.”

And he concluded by assuring that the political organizations that operate in the region are willing to collaborate with the Armed Forces. “There are organized and conscientious people here,” He said Mayor Romero. 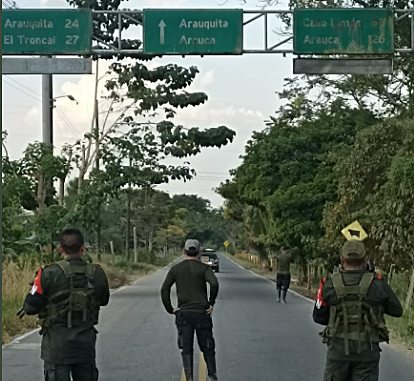 Members of the ELN would have control of the main roads in the Colombian municipality of Arauquita, near the border with Venezuela / Maria Camila Orozco

In the first two weeks of the year alone, Colombia has already recorded more than 30 murders in the Arauca region. According to the Institute of Studies for Development and Peace (Indepaz), last Monday (17), human rights defender Miguel Carrillo was assassinated in the Colombian municipality of Arauquita, joining the three social leaders assassinated in the 2022 and 1,289 since the signing of the 2016 Peace Accords.

With Miguel Carrillo there would be 03 leaders and human rights defenders assassinated in 2022 and 1289 since the signing of the peace agreement. pic.twitter.com/TpwEnMpO9o

In April of last year there had already been an armed confrontation on the border between Arauca and Apure, which lasted about 20 days and ended with 17 dead and 3,000 displaced. The episode was denounced by the ELN as an operation orchestrated by the Colombian army with support from the US.