Britain may create an alliance with Ukraine and Poland 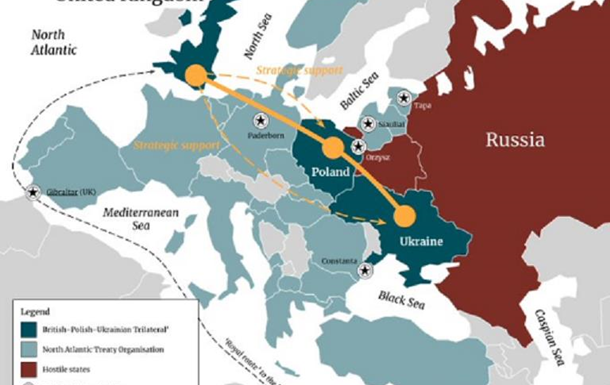 The map of a potential union shows a triple axis between London, Warsaw and Kiev. The territories of Russia and Belarus are marked as hostile.

The UK is considering a tripartite alliance with Poland and Ukraine. This was confirmed by British Foreign Secretary Liz Truss, according to site governments of Britain.

According to her, the partnership between the countries is developing after high-level talks in London in December.

UK Geostrategy Council in its Twitter published a map of a potential union showing a triple axis between London, Warsaw and Kiev.

Territories of Russia and Belarus are designated as hostile

Recall, British Foreign Secretary Liz Truss warned Russia that in the event of an invasion of Ukraine, the Kremlin will get a war comparable to campaigns in Afghanistan or Chechnya.

The head of the German Navy resigned - media

Fire in the ATB office building: a criminal case has been opened