Zelensky, Nauseda and Duda made a statement on Russia’s recognition of the LDNR 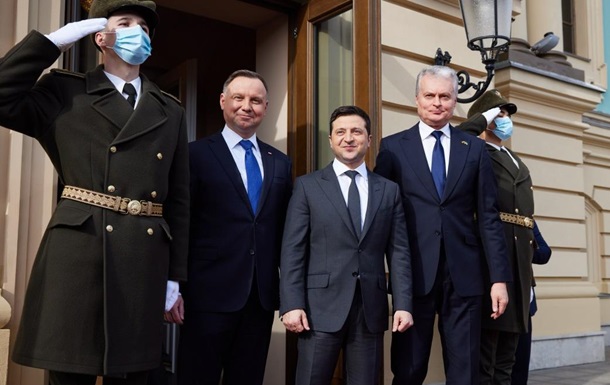 The presidents called on Russia to de-escalate and withdraw its armed forces from the borders of Ukraine and from the occupied territories.

Presidents of Ukraine Volodymyr Zelensky, Lithuanian Gitanas Nauseda and Poland Andrzej Duda signed a joint statement regarding Russia’s recognition of the independence of the Donetsk and Lugansk “republics”. This is reported on website Ukrainian head of state.

“We, the Presidents of Ukraine, the Republic of Lithuania and the Republic of Poland, the states of the Lublin Triangle, condemn in the strongest terms the decision of the Russian Federation to recognize the quasi-entities in the temporarily occupied territories of Ukraine – the so-called “Luhansk People’s Republic” and “Donetsk People’s Republic”. This aggressive step by Russia is yet another gross violation of the fundamental norms and principles of international law, as well as the security guarantees provided to Ukraine by the 1994 Budapest Memorandum,” the document says.

The statement notes that the Russian Federation deliberately withdrew from the Minsk agreements, and therefore now bears full responsibility for further escalation.

“We reaffirm our strong commitment to the sovereignty, independence and territorial integrity of Ukraine within its internationally recognized borders, including its territorial waters. The decision of the Russian Federation to recognize the so-called “LPR” and “DPR” will have no legal consequences,” the presidents stressed.

The heads of state also turned to the world community with a demand to take measures in response to the actions of the Kremlin.

“Such a response should include the rapid imposition of a powerful package of sanctions against the Russian Federation, including measures aimed at Nord Stream 2,” the document emphasizes.

In addition, Zelensky, Nauseda and Duda called on Russia to de-escalate and withdraw its army from the borders of Ukraine and the temporarily occupied territories of Ukraine.

“Ukraine deserves our support for its European and Euro-Atlantic aspirations, which is in line with the will and choice of the Ukrainian people. Lithuania and Poland reaffirm their support for Ukraine’s European perspective… Ukraine deserves EU candidate status, and the Republic of Lithuania and the Republic of Poland will support Ukraine in achieving this goal,” the presidents summed up.


Ukraine, Poland and Lithuania signed a statement of support for EU membership

Recall that the presidents of Lithuania and Poland arrived in Ukraine on February 23.