From Tuesday (29), app workers – including drivers and delivery people – will strike and demonstrate in at least 16 Brazilian cities.

Better working conditions, higher pay for races and rejection of the rise in fuel prices are the demands that unite the categories in the mobilizations that, in some cities, bear the name of “application blackout”.

The main companies targeted by the strikes are the largest in the individual transport and delivery in Brazil: Uber, 99 and iFood.

This month, a survey linked to the University of Oxford on the performance of these and three other platforms in Brazil pointed out indecent working conditions in companies.

For months, app delivery people have been fanning the idea of ​​a national brake on platforms on April 1st, April Fools’ Day. Added to this were the mobilizations of Uber and 99 drivers scheduled for March 29.

The mobilizations by the cities

In Rio de Janeiro, the strike is unified between drivers and delivery people and takes place on Tuesday (29) and Wednesday (30).

On the first day, a demonstration will leave Santos Dumont airport at 7 am towards Uber’s headquarters. In the second, the concentration is on Trevo das Margaridas. 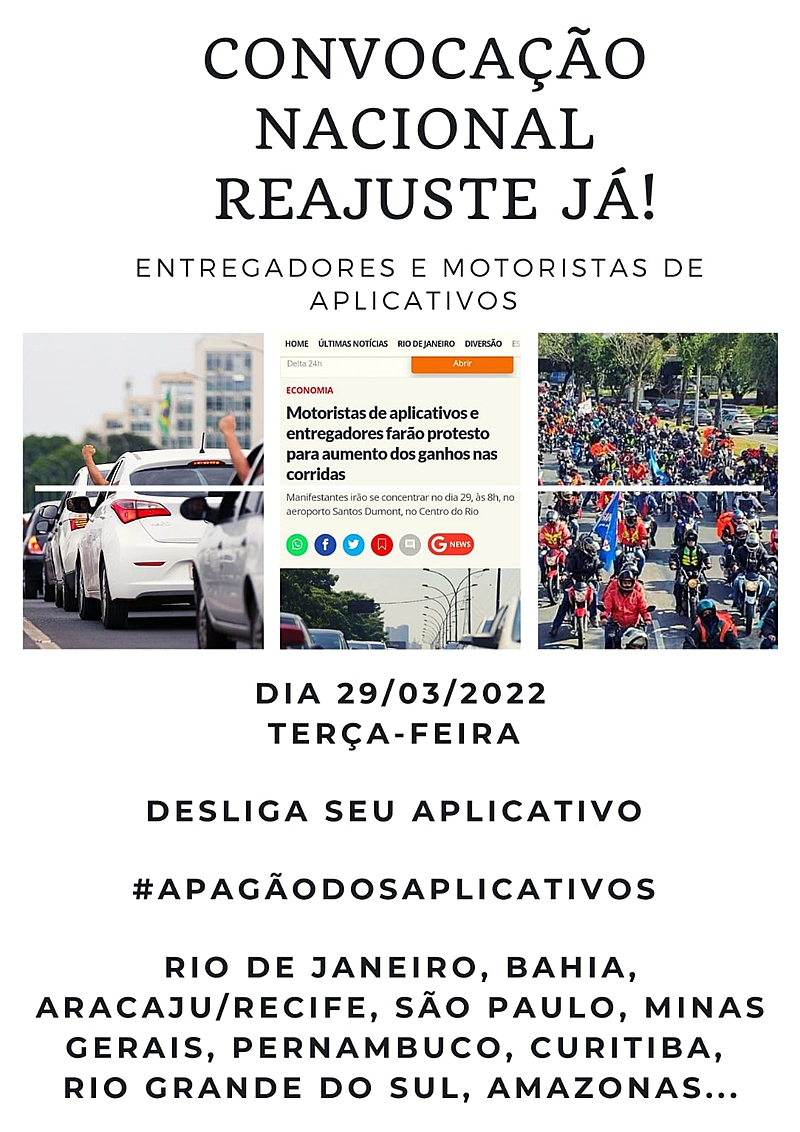 “We are doing a big campaign for everyone to turn off the apps and we are going to create several blocking points”, says Luiz Corrêa, who has worked as a driver for Uber and 99 for five years in the Rio de Janeiro capital.

President of the Union of Service Providers Through Apps of Rio de Janeiro (Sindimob), Corrêa says that stickers and a 100-meter flag were prepared for the mobilization.

:: Uber and iFood pay less than the minimum and have indecent working conditions, says study ::

In the capital of Bahia and in six cities in Pernambuco, the strike is also unified among app workers and is scheduled for Tuesday (29). In Manaus, it is being organized by drivers only.

In Belo Horizonte, there will be a staggered strike of both categories between Tuesday (29) and Sunday (3). At the forefront of the mobilization are the couriers, who promise to completely paralyze the delivery during the weekend. 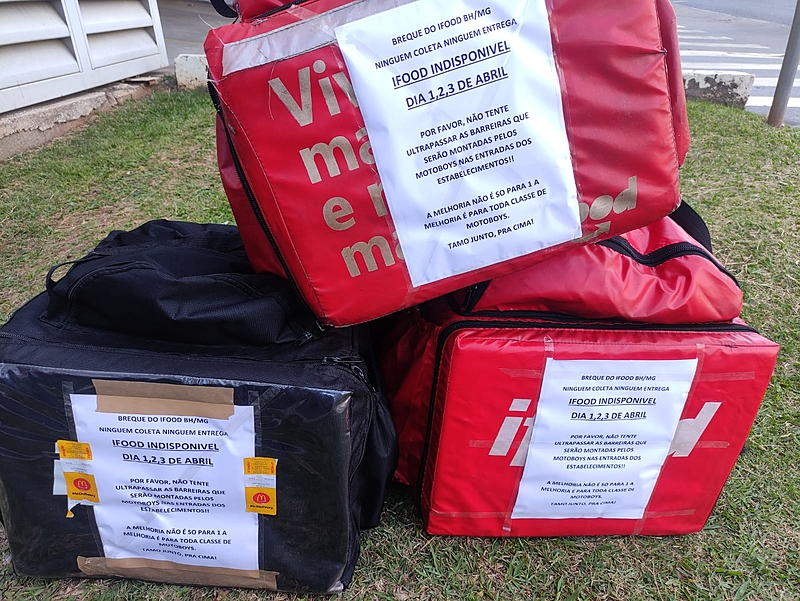 In Belo Horizonte, posters on the bags warn that, from April 1st to 3rd, deliveries are on hold / Paralisação BH

In São Paulo, drivers will stop racing on Tuesday (29). According to Lucas Rodrigues, an Uber worker, 700 drivers are expected to gather in front of the company’s headquarters, located in Barra Funda.

As of Friday (1), delivery men from São Paulo also brake. At 8 am that day, a demonstration is scheduled with concentration in front of the Pacaembu stadium.

“We’ll take the Pinheiros waterfront and then head to the iFood headquarters in Osasco,” says delivery man Altemício Nascimento. “Everything will be mixed: biker, motoboy, truck driver, school van”, he says. 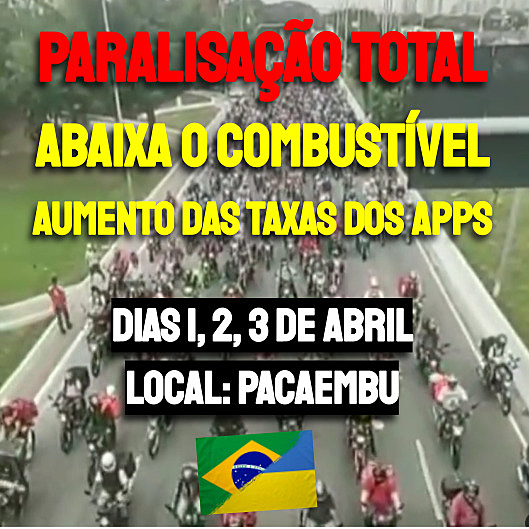 In the capital of São Paulo, drivers, delivery men and truck drivers are being summoned to act on Friday (1) / São Paulo strike

Shortly after Petrobras announced, on the 10th, another increase in fuel prices – this time by 19% for gasoline and 25% for diesel – Uber, 99 and later iFood, announced that they would make adjustments in the remuneration of workers.

99 promised a 5% increase in the value of the mile driven and Uber, a temporary readjustment of 6.5% per ride. It turns out that, according to the drivers, the increase so far has not arrived.

“Even with all these increases in gasoline, they offered a symbolic 6.5% readjustment that in practice never happened and, even if it happens, represents R$0.65 in a minimum fare. Anyway, huh? People revolted,” says Mônica Sguerri, an app driver in São Paulo.

:: Drivers contest Uber and 99: “The readjustment, in addition to being insignificant, did not happen” ::

The 99 stated to the Brazil de facto that since last Wednesday (23), drivers receive “an aid in their earnings based on the variation of gasoline costs in different regions of the country”. According to 99, R$0.10 more will be paid per kilometer driven for each R$1 increase in fuel.

Uber was contacted, but did not respond at the time of writing this article.

iFood announced, on the 17th, that it must readjust the minimum fee paid to the delivery person for each race. From R$5.31, it should go to R$6. The amount paid per kilometer traveled should go from R$1 to R$1.50.

According to the company, the change will take effect from April 2, exactly the day after the delivery strikes were already scheduled.

For Nascimento, the announced readjustment is the result of pressure from the category through the intensification of strikes, which since September last year have lasted for several days.

The increase in fees, despite being the main demand of drivers and couriers, does not exhaust the list of demands that will be made explicit once again, this time in the unified strikes.

Drivers demand that the percentage of each ride that stays with the company be fixed at 20%; that the travel to the passenger is paid; that the minimum value of the race is R$10 and that cameras are installed in the cars of female drivers.

Monica also criticizes the lack of transparency of the applications. “At Uber, you never know how much you’re going to withdraw for that ride. That’s why people complain a lot that we cancel, right? We need to accept to know the address and in many cases the value is so, but so small, that it is not worth the displacement”, she explains, when demanding that this information become accessible.

In Brasília, the strikers are also demanding that the minimum delivery fee be R$7.

To the Brazil de factoiFood stated that scheduling is optional and that “it is a transparency initiative” that aims to “bring more predictability to delivery people and to the operation”.

The grouped orders, according to the company, give “more dynamism” to operations and allow “increased earnings for couriers”.

For iFood, communication about issues that can lead to platform blockages is being improved. In addition, the company says it does not prefer the distribution of orders for any of the delivery models.

The delivery industry giant reported that the adjustment “will increase the gains of the approximately 200,000 couriers registered on the platform” and that the measure is the result of “the existing dialogue with the category” and “the letter of commitment from the Couriers Forum” . This was a closed-door meeting in December last year, promoted by the company with 23 deliverymen chosen by it.

:: On the first day of the iFood forum, delivery people stop the highway and brake in 2 cities in SP ::

Regarding the date chosen for the increase in rates to take effect, iFood said that “it is due to a need to adjust the operation”.

“They postponed the increase to the 2nd to put an end to the demonstrations”, says Nascimento. “But we go up”, he adds.