Russian occupiers, without means of protection, dug trenches in the most polluted place in the Exclusion Zone – the Red Forest.

After the announcement of the withdrawal to Belarus for the regrouping of forces, the Russian occupation troops are already leaving the Chernobyl zone. According to media reports, the occupiers interacted with the soil in the Red Forest, which took on the greatest radiation impact after the accident. They were probably irradiated – in the center of radiation medicine in the Belarusian Gomel they notice a transport with the Russian military. Perild.com tells the details.

One of the outcomes of the talks between Ukraine and Russia in Istanbul was the Russian side’s statement about the reduction in the activity of hostilities in the Kiev and Chernigov directions. Initially, Moscow presented this as an act of good will, and not the inability to achieve its goals in this region, that is, the capture of Kyiv.

Then the Russian Defense Ministry announced that they had achieved all their goals in the north of Ukraine, among which, as they said on March 31, “the termination of the activities of five Kiev biological laboratories.” The main goal is now called the “liberation of Donbass” and the withdrawn occupying forces will be regrouped and thrown into the east and south of Ukraine.

However, the Ministry of Defense of Ukraine believes that Russia has not given up trying to capture or encircle Kyiv and Chernihiv and withdraws the units that suffered the most losses in order to resupply them.

Despite Russia’s statements, during the day after the talks, continuous artillery salvos were heard on the outskirts of Kyiv both day and night. In addition, Kyiv, Chernigov and the surrounding settlements were subjected to Russian missile attacks.

On the evening of March 30, the AFP agency and the CNN television corporation, citing sources in the Pentagon, reported that the Russian invaders had begun to leave the Chernobyl nuclear power plant and retreat to the territory of Belarus.

“Chernobyl is one of those places where [оккупанты] begin to move part of their troops, [они] leave the Chernobyl nuclear power plant and go to Belarus. We think they are leaving. But I can’t say that they are all gone,” the source told AFP.

Russian troops captured the Chernobyl nuclear power plant on the first day of the war – February 24th. Since then, the same shift has been working at the station for almost a month. Already on March 14, the IAEA announced that due to mental and physical fatigue, the Chernobyl personnel no longer carry out repairs and maintenance of equipment.

Only in the last days of March, a new shift of workers was delivered to the Chernobyl nuclear power plant. Now there are 59 new specialists, of which six are women. This was announced on March 30 by the head of the State Agency for the Management of the Exclusion Zone Yevgeny Kramarenko.

The specialists withdrawn from the Chernobyl nuclear power plant were delivered to Slavutych. A psychologist is currently working with them. According to Kramarenko, the personnel were not subjected to physical violence by the Russian military, but the occupiers exerted strong psychological pressure.

Late in the evening on March 31, the state company Energoatom reportedthat the information was confirmed that the invaders who seized the Chernobyl nuclear power plant and other objects in the Exclusion Zone, as well as Slavutych, set off in two columns towards the Ukrainian border with Belarus.

According to Energoatom, leaving the power plant, the occupiers drew up an “Act of acceptance and transfer of the guards of the Chernobyl nuclear power plant.” It says that “there are no claims from the administration of the protected facility against the troops of the National Guard of the Russian Federation.” 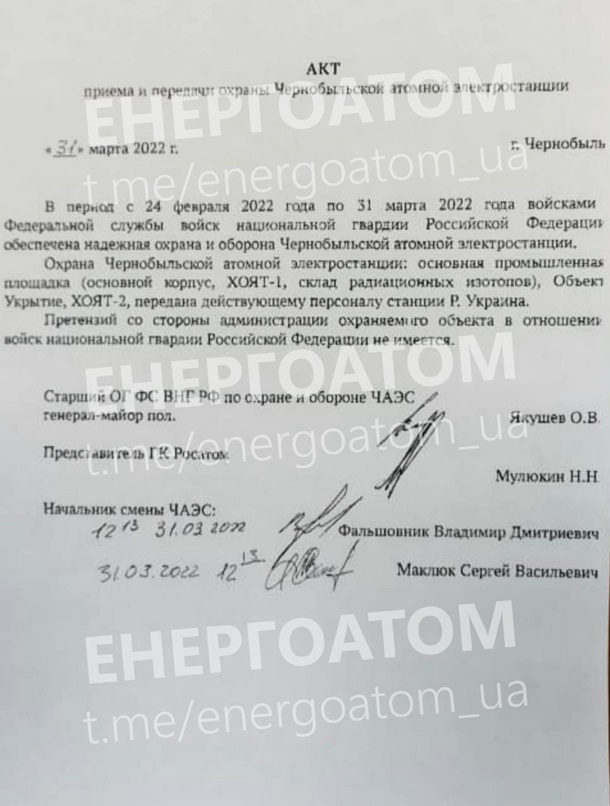 “Today, in many settlements, it was noticed that the enemy was leaving. So far we do not know for certain where this movement is going, but we know that the National Guardsmen were taken from the Chernobyl nuclear power plant, who from the first day were captured at the nuclear power plant,” who guarded it. They were taken and taken away,” he said.

Irradiation of invaders in the Exclusion Zone

There are two reasons for leaving the territory of the Exclusion Zone, said Vadim Denisenko, adviser to the Minister of Internal Affairs. Firstly, this is rotation, and secondly, the real exposure of part of the Russian military.

“As representatives of Energoatom have already reported, the Russians gathered the workers of the nuclear power plant and announced that they were leaving. In fact, they are leaving the city of Slavutych and the station. In fact, we can say that the Russians are really leaving the Chernobyl zone,” he said on the air of the telethon .

According to the adviser to the Ministry of Internal Affairs, panic and misunderstanding among the Russians is obvious that the soldiers are in a situation that they did not even theoretically expect.

“And the fact that seven buses with soldiers were taken to the rehabilitation center in Gomel led to panic among the contingent that is in Chernobyl or near it,” Denisenko explained.

In his opinion, “a radiation panic has begun in this contingent.” “I think that it was hardly possible for the leadership of their units to keep these people further,” the adviser to the head of the Ministry of Internal Affairs said.

Regarding the withdrawal of troops, Denisenko clarified that it is really happening in the Kiev region, but it is too early to talk about a serious withdrawal in Chernihiv, which is more like a rotation or regrouping

“It is not surprising that the invaders received significant doses of radiation and panicked at the first sign of the disease. And it manifested itself very quickly. Almost a riot began to brew among the military, and they began to gather from there,” Energoatom said in a statement.

The day before, the Belarusian media reported that about seven medical PAZs arrived in Gomel to the Republican Scientific and Practical Center for Radiation Medicine and Human Ecology.

“You can see from the photograph that people are visible in the cars. We note that Russian soldiers are brought to this center on a regular basis,” – says in the message of the portal Belaruski Gayun, who monitors the movement of Russian troops in Belarus.

Earlier, Reuters wrote, citing Chernobyl employees, that the Russian occupiers in the Red Forest did not use any anti-radiation agents. The interlocutor of the agency called it “suicide” because the radioactive dust they inhaled could cause internal radiation exposure of the body.

“A large convoy of military equipment drove along the road right behind our facility, and this road passes by the Red Forest. The convoy raised a large column of dust. Many radiation safety sensors showed an excess of the level,” one of the Chernobyl employees said.

In social networks, the actions of the invaders were very surprised both in Ukraine and Belarus, and in Russia. The radiation hazard of the Chernobyl zone and the Red Forest in particular is known all over the world, and even more so in the countries of the former Soviet camp.

I can imagine our SSOs clearing Chernobyl of Rusna at night, but they don’t need night vision devices.

-who is the alpha male now?
-one who dug a trench in the red forest

That is the rays of good

– Guys, you are digging a red forest here!

– someone, it’s not clear – sailboats can be?

– I say – dig deeper and lie down there and rest!

The Russian military dug trenches in the Red Forest around the Chernobyl nuclear power plant.

Now they leave the zone and come with radiation to the Belarusian Center for Radiation Medicine in Gomel pic.twitter.com/kptluxRmzD

All blond soldiers who sat in the trenches in the red forest will be given the title of superheroes (posthumously).

As for the news about “Red Forest” and Russia
I’ll say this:

Disney has banned the distribution of its films in Russia