The wiretapping that links Jair Bolsonaro (PL) to the death of militiaman and former military policeman Adriano da Nóbrega is not the first sign of involvement between the president and the Rio militia.

Although Bolsonaro has already publicly denied involvement with paramilitaries, there are other connections that show the closeness of the president’s family to neighbors, police and politicians involved with the militia. See the full list below.

Government offered positions for the death of militiaman, says sister

Recordings released on Wednesday (6) by the newspaper Folha de S.Paulo show Adriano’s sister, Daniela da Nóbrega, telling an aunt that the federal government would have offered commissioned positions at the Planalto Palace for the death of the former captain.

Still according to sheet, the mention of the Planalto Palace made by Adriano’s sister was omitted from the wiretapping report. Although it is classified as high priority, the document only describes a summary of the dialogue between Adriano’s other sister, Tatiana, and her aunt, which took place on the same call. 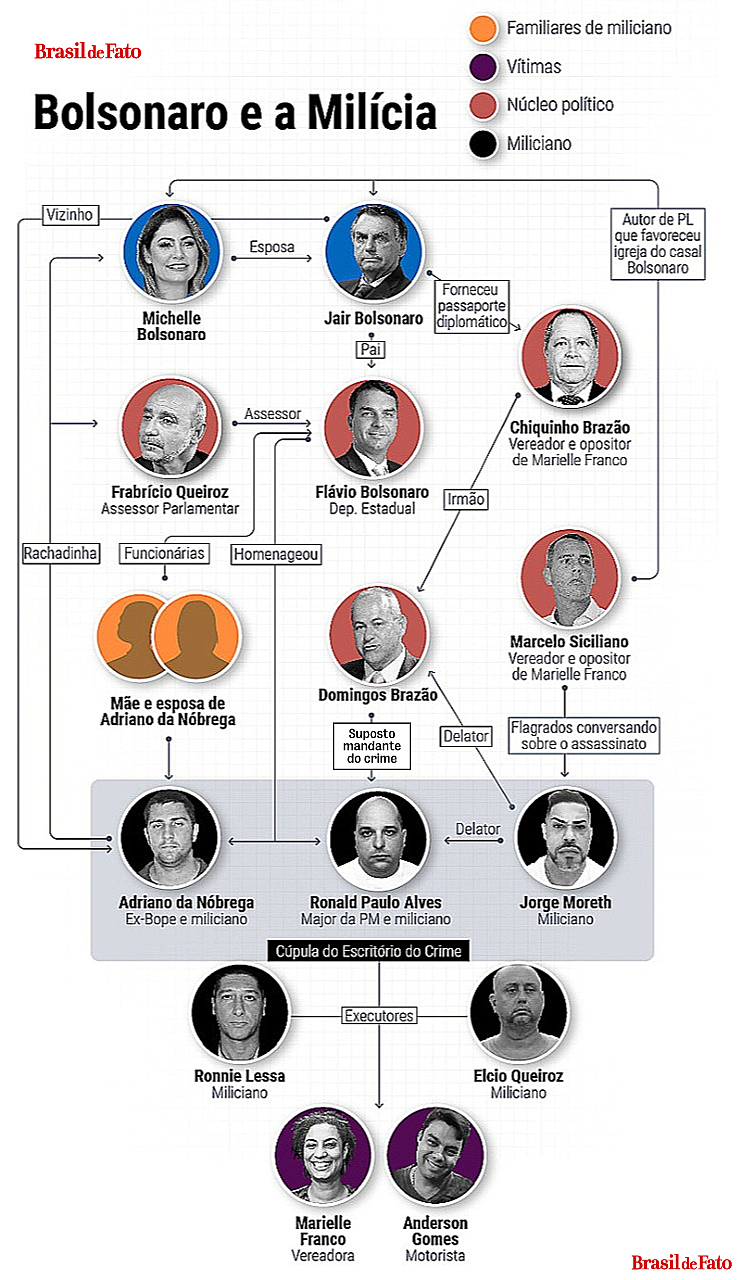 During the investigations into the murder of Marielle Franco, it was found that the retired police officer Ronnie Lessa, accused of being the author of the shots that killed the Psol councilor, was Bolsonaro’s neighbor. Both lived in the condominium Vivendas da Barra, on the same street, in Rio de Janeiro. “I don’t remember this guy. My condominium has 150 houses,” said the president, according to the Folha de S.Pauloat breakfast with some journalists.

In 2019, police chief Giniton Lages, head of the Homicide Police Station in Rio de Janeiro and one of those responsible for investigating the execution of Marielle Franco, confirmed that Ronie Lessa’s daughter, arrested on charges of being one of the perpetrators of the murder, dated a man. of the sons of President Jair Bolsonaro, the youngest Jair Renan Bolsonaro.

After the arrest, it was revealed that Lessa’s accomplice in the execution, former PM Elcio de Vieira Queiroz, published an image in which he appears side by side with Bolsonaro on October 4, 2018, on the eve of the first round of the presidential election. Days earlier, on September 25, the same profile posted a recording of a Paulo Ricardo concert with the caption “Homage from Paulo Ricardo (RPM) to Captain Bolsonaro!”

Diplomatic passport for the Brazão family

João Vitor Moraes Brazão and Dalila Maria de Moraes Brazão, son and wife of federal deputy Chiquinho Brazão (Avante-RJ), received their diplomatic passport from Itamaraty on July 9 this year. The parliamentarian, who also has the document, is the brother of Domingos Inácio Brazão, a counselor at the Rio de Janeiro State Court of Auditors (TCE-RJ) accused of obstructing investigations into the murder of councilwoman Marielle Franco, which took place in March 2018. , and suspected of being one of the masterminds of the crime. The members of the Brazão family are on a list of 1694 diplomatic passports issued by the Jair Bolsonaro government (PSL), which the Brazil de facto had access through the Access to Information Act.

Context: Diplomatic benefit reinforces relationship between Bolsonaro and suspect in the Marielle case

The militiaman Adriano da Nóbrega, a former BOPE officer, is appointed head of the criminal organization Crime Office. Murdered on February 9, 2020, after a police operation that tried to capture him in Bahia, after a year on the run, he is a key figure for understanding various crimes, but also for understanding the Bolsonaro clan’s relationship with Rio’s militias. .

During the term of then state deputy Flávio Bolsonaro in the Legislative Assembly of Rio de Janeiro (Alerj), the ex-wife and mother of Nóbrega, Danielle Mendonça da Costa and Raimunda Veras Magalhães, worked, respectively. They received a total of BRL 1,029,042.48 in salaries and transferred BRL 203,000 to Fabrício Queiroz, respecting the scheme established in the cabinet to benefit the parliamentarian, according to the MPE’s complaint.

Flávio’s tribute and friendship with Queiroz

Friendship is also the nature of the relationship between Adriano da Nóbrega and Queiroz, who have known each other since 2003, when they served together in the 18th Battalion of the Military Police of Rio de Janeiro (PMRJ). Just this year, Nóbrega received the first honor from Flávio Bolsonaro at Alerj. The second would come in 2005, the year in which the former BOPE agent was tried and convicted in a popular jury, on account of a homicide.

:: Interview | Marielle’s mother finds fifth deputy in the case and demands resolution of the crime ::

Support of Jair Bolsonaro in the Chamber of Deputies

During his trial, Nóbrega received important support from the then federal deputy Jair Bolsonaro. After the hearing that culminated in the conviction of the militiaman, the current president of the Republic went to the tribune of the Chamber of Deputies and defended the soldier. “He was always a brilliant officer.”

Another important character of the Crime Office, Major Ronald Paulo Alves, appointed by a witness as responsible for organizing the group of assassins who would execute Marielle Franco and Anderson Gomes, was also honored by Flávio Bolsonaro at Alerj.

In 2004, the president’s son celebrated an action led by Alves that ended with three deaths. A year earlier, in 2003, the major would have participated in the slaughter of five youths inside the Via Show nightclub, in São João de Meriti. Four police officers have already been convicted in the case and only the agent decorated by Flávio Bolsonaro has not yet been tried.

Japanese company will give the world access to computing technology

Sharon Stone lit a candle in honor of the Ukrainians