Far beyond Viagra: use of SUS resources by the military soared with Bolsonaro

The use of resources from the Unified Health System (SUS) by the Ministry of Defense broke a record in the government of President Jair Bolsonaro (PL). The information is contained in a document released by the Budget and Financing Committee of the National Health Council (CNS) in February this year.

:: Defense invests in Viagra and internet does not forgive; deputies suspect overbilling ::

In 2019, the annual amount of SUS funds directed to the health of the military was R$ 350 million. Two years later, in 2021, the figure reached BRL 355 million, again breaking the record of the historical series, from 2013 to 2021. The Bolsonaro government dedicated, on average, BRL 325 million per year to the Ministry of Defense.

During the administration of President Dilma Rousseff (PT), the annual average use of SUS resources by the military was R$ 88 million, considering the period analyzed, from 2013 to 2015. Under the command of Michel Temer (MDB), the amount had already taken a leap, with an average of R$ 245.5 million per year.

The survey was published in a publication on the evolution of federal spending on the Unified Health System, produced by the CNS, an agency that brings together representatives of civil society and public authorities. Click here and do the download of the entire newsletter.

The study was produced by two technical consultants from the CNS Budget and Financing Commission, economists Francisco Funcia, vice president at the Brazilian Association of Health Economics, and Rodrigo Benevides, who holds a master’s degree in Public Health from the Institute of Social Medicine at UERJ.

The numbers collected on the SigaBrasil platform show the increase in funds from the SUS to the Ministry of Defense. The agency is second only to the Ministry of Education, which has a network of university hospitals across the country. In the same period, however, there was a drop in funds received by the MEC. 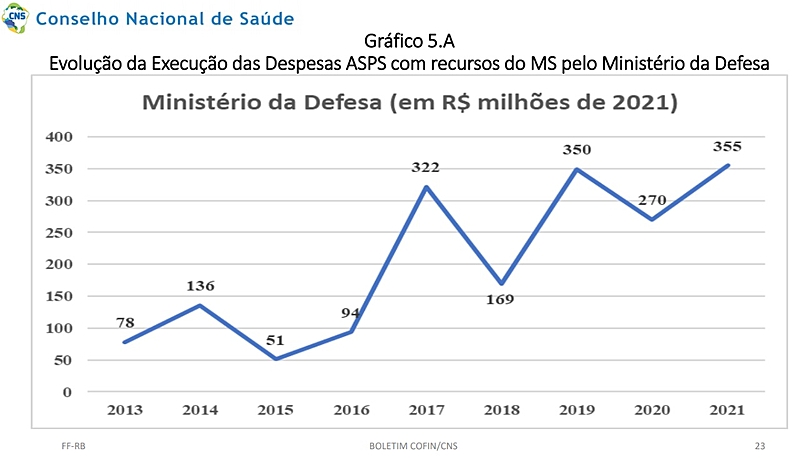 Read the chart with the evolution of the execution of MEC expenses with resources from the Ministry of Health: 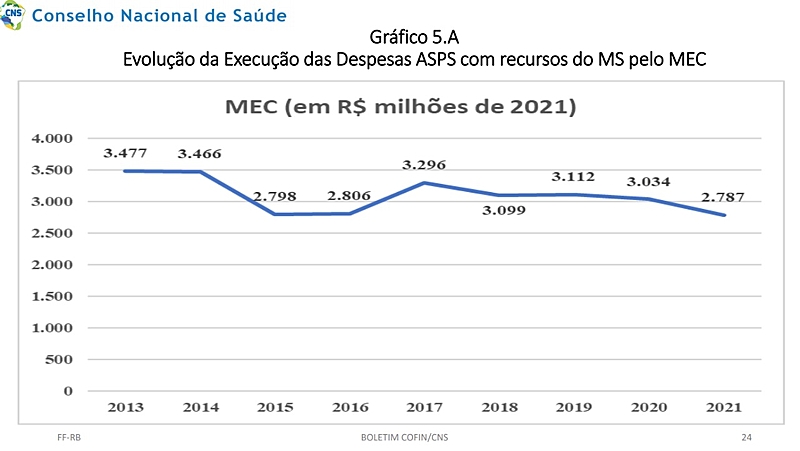 Read the table comparing the budget of different agencies during the pandemic: 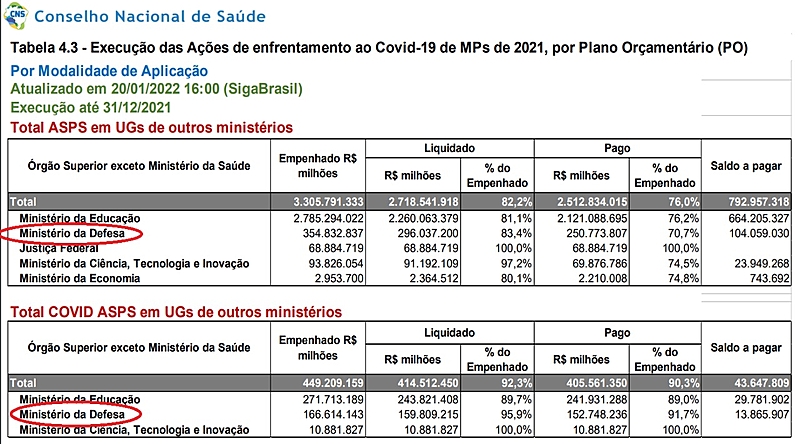 Spending on viagra becomes a meme

Charges for explanations, jokes and memes set the tone for reactions to the news that the Ministry of Defense had approved the purchase of 35,320 Viagra pills for the Army, Navy and Air Force. The substance is known to treat cases of erectile dysfunction.

In addition to the unusual purchase, parliamentarians are suspicious of overpricing in the process. The complaint led federal deputies Elias Vaz (PSB-GO) and Marcelo Freixo (PSB-RJ) to call the Federal Public Ministry to ask for investigations into the evidence of overpricing.

According to a survey by the two parliamentarians, the amounts paid by the Bolsonaro government can be up to 143% more expensive than those practiced in the market.

Between 2020 and 2021, at least eight trading sessions were authorized and are still valid. The processes were identified on the Transparency Portal and on the government’s Price Panel by Elias Vaz’s team.

The parliamentarian also filed a request for the Ministry of Defense to explain the reasons for purchasing the drug. More than 28,000 tablets of Sildenafil (the generic name for Viagra) went to the Navy. Army and Air Force received, respectively, 5,000 and 2,000 units.

Fifty landless graduates in Veterinary Medicine in RS this Friday

In Mariupol, the marines left the encirclement and connected with Azov - media

Garimpeiros are as many victims as the Yanomami, says Funai president