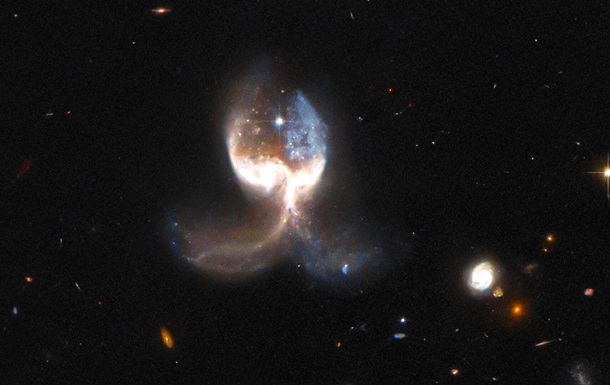 Image of two merging galaxies in the VV689 system

In the process, a whole gallery of strange and wonderful types of galaxies previously unknown to science was discovered.

It is noted that unlike the random alignment of galaxies, these celestial bodies are in the process of colliding. Their interaction made the VV689 system almost completely symmetrical, giving the impression of a large set of galactic wings.

This series of Hubble observations is devoted to the study of the main points of the civil science project Galaxy Zoo. The crowdsourced astronomy project relied on hundreds of thousands of volunteers to classify galaxies and help astronomers deal with the flood of data from robotic telescopes.

In the process, a whole gallery of strange and wonderful types of galaxies previously unknown to science was discovered.

Recall that earlier Hubble captured a black hole at the center of the dwarf galaxy Henize 2-10, which does not suppress, but stimulates star formation around it.


NASA plans to land astronauts on Mars by 2040

AZOVites showed how they counterattack the enemy in Mariupol