Looking at Ukraine. Taiwan prepares for war with China

Washington and Beijing are closer than ever to an armed conflict over a strategic island.

China has announced a massive military exercise in response to US “wrong signals to separatists” after a delegation of six US congressmen made an unannounced visit to Taiwan.

A new aggravation around Taiwan has been expected since the beginning of Russia’s full-scale invasion of Ukraine. Beijing considers the island a breakaway province and does not rule out the use of force to restore its sovereignty.

It is assumed that China can take advantage of the fact that the attention of the United States – Taipei’s main ally – is diverted to Ukraine. Washington, in response to the threat, promises to do everything to prevent the forcible annexation of Taiwan. Perild.com tells the details.

Waiting for war with China

Taiwan Air Force planes flew over the island’s capital for two hours starting at 5:00 a.m. last Tuesday. These were exercises in case of war with China. Taiwan Defense Minister Chiu Kuo-cheng said that “the example of Ukraine inspires him” and the island should also prepare for defense.

The exercises began early in the morning without prior warning. This made it possible to check the readiness of the air defense forces to repel a surprise attack from the air and at the same time avoid problems for civil aviation flights. Readiness checks were also carried out at missile batteries, air bases and military ports in Taiwan.

According to the South China Morning Post, Taipei residents usually see military aircraft during parades or important ceremonies, so some considered what was happening to be the start of a war.

On the day of the exercise, the island’s defense department issued a civil defense pamphlet with instructions on how to survive if attacked by the Chinese army. For example, what to do if the bombing starts.

On 28 illustrated pages it tells where to find shelter, food, water, where to turn for help. Advice is given on what to do if the house collapses, a fire breaks out.

For telephone communication with local authorities, QR codes are introduced. The Ministry of Defense, together with the Ministry of Education, introduces sections on civil defense into school textbooks.

The one-China principle proclaimed by Beijing does not allow simultaneously recognizing both the PRC and the Republic of China on Taiwan, which is why most of the world’s states, including the world’s leading powers, today have only unofficial cultural and economic ties with Taipei.

Taiwan proclaimed itself the Republic of China in 1949 after the followers of the Kuomintang Party fled to this island after losing the Chinese Civil War to the communists led by Mao Zedong.

Since then, Beijing has considered Taiwan a rebel province and has threatened to forcibly reunite it with mainland China. Internationally, Beijing seeks to isolate the island. Thus, China seriously quarreled with Lithuania, which opened a diplomatic representation of Taiwan in the country.

Beijing does not rule out the use of force

Taiwanese Foreign Minister Joseph Wu has linked military preparations on the island to Russia’s war against Ukraine. As recalled by Reuters, a number of commentators drew parallels between Ukraine and Taiwan.

The topic of Beijing’s possible attempt to take advantage of the Ukrainian crisis to forcefully end the problem of Taiwan independence and liquidate the Republic of China on the island, which Beijing considers a rebellious province of the PRC, has become one of the hottest topics in the entire Indo-Pacific region.

Beijing rejects the comparison with Ukraine, pointing out that Taiwan has always been part of the PRC and that it hopes for a peaceful solution to the issue. At a session of the Chinese Parliament in March, Prime Minister Li Keqiang recalled the principle of one China.

“We will pursue a line of peaceful development of ties across the Taiwan Strait and reunification. We firmly oppose the separatists who seek Taiwan independence and interference from outside forces,” Li said, referring to the separatists as President Cai Ing-wen’s Democratic Progressive Party.

Chinese Ambassador to the US Qin Gang was more radical. The Taiwan issue is the biggest irritant in Sino-US relations. “If the Taiwanese authorities, at the instigation of the United States, continue to follow the path to independence, this will most likely lead to a military conflict between China and the United States,” the diplomat said.

An even more formidable statement against the United States was made by the official representative of the Chinese Ministry of Defense, Tan Kefei.

“The People’s Liberation Army of China will take effective measures to resolutely suppress any form of outside interference and attempts by separatist forces to achieve independence for Taiwan, and will unwaveringly protect national sovereignty and territorial integrity,” he said.

US and China close to armed conflict

The US has no official relationship with Taiwan, but is considered its most important international supporter and arms supplier. The administration of US President Joe Biden has repeatedly spoken about its support for the island, which has exacerbated the already difficult Sino-American relations.

On the eve of an air defense exercise in Taiwan, Washington and Beijing were closer than ever to armed conflict.

Planned for mid-April, the visit to Taipei of the third person in the hierarchy of American power – Speaker of the House of Representatives of the US Congress Nancy Pelosi – was regarded in the PRC as the readiness of the United States to violate the sovereignty and territorial integrity of China and thereby cross the red line.

Chinese Foreign Ministry spokesman Zhao Lijian urged the US leadership to uphold the one-China policy and stop all official contact with Taiwan.

“China will continue to take vigorous action and firmly stand up for its sovereignty as well as its territorial integrity,” he warned.

The diplomat added that US officials should refrain from “irresponsible allegations,” reacting to a statement by US national security adviser Jake Sullivan that “the US will take every possible step to prevent Taiwan from joining mainland China by force.”

“For the United States, the situation with Ukraine and with Taiwan is not the same thing. Our public policy is that we will take all possible measures to ensure this [присоединения] never happened” said Sullivan April 14th.

Officially, the planned visit of Pelosi was not reported, but they wrote about it with reference to American media sources. On the eve of the first visit of the speaker of the US House of Representatives to Taipei in the last quarter of a century, the American side announced its postponement due to the coronavirus found in Pelosi.

The trip of American politicians took place on April 14, but in a more modest composition. Six lawmakers made an unannounced visit to Taiwan, including US Senate Foreign Relations Committee Chairman Bob Menendez (D-Party) and Republican Senator Lindsey Graham. 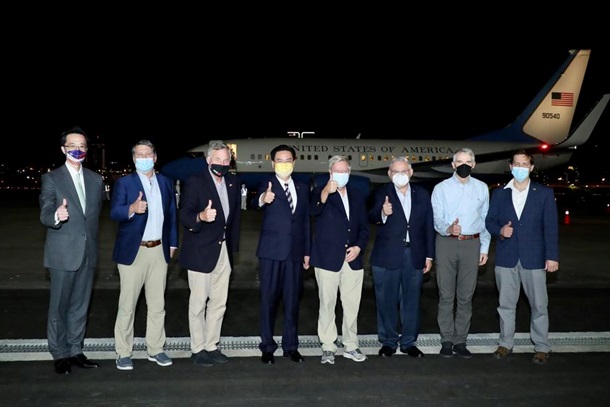 The visit demonstrates not only the US bipartisan support for Taiwan, but also the strong nature of the relationship between Taiwan and the US, Xavier Chang, a spokesman for the presidential administration, said in a statement.

“The administration looks forward to further strengthening the partnership between Taiwan and the United States through personal exchanges and continuing to work together to promote global and regional peace, stability, prosperity and development,” said a spokesman for the Taiwan administration.

Note that during a meeting with Taiwanese President Tsai Ing-wen, Graham promised that China would pay for Russia’s support.

“Originally Japanese”. Tokyo recognizes the occupation of the Kuriles

“We will make China pay a big price for what they are doing. Putin’s support must come at a cost,” the US senator said.

Regarding the nature of Taiwan’s defense against a possible Chinese attack, Graham only replied that “all options are being considered.”

China responded by announcing large-scale exercises in the airspace of the East China Sea and around Taiwan, which involve destroyers, frigates, bombers, fighters and other forces of the Chinese army.

China’s Defense Ministry said the US was sending “serious wrong signals to Taiwanese separatists” even though it “promised China not to support” the island.

Meanwhile, global funds and companies are actively reducing investment in China due to fears of government intervention in business and the risk of sanctions following the Russian invasion of Ukraine, writes Bloomberg.

Why Ukraine is not Taiwan

The strategic importance of Taiwan in the struggle for world leadership between China and the United States lies not only in the location of the island, which allows it to control important sea trade routes, writes Center for Countering Disinformation under the National Security and Defense Council April 18.

Taiwan is also a leading global technology hub today, with Taiwanese companies supplying 63 percent of the world’s semiconductors, as opposed to 12 percent in the US. Taiwan Semiconductor Manufacturing Co. alone produces more than half of the world’s chips and about 90 percent of today’s processors.

Taiwan can also host long-range missiles capable of attacking important industrial centers in China, which Washington has identified as its main global adversary this century.

Therefore, it is likely that the US geopolitical stakes in Taiwan are much greater than in relation to Ukraine, the report says.

China’s military presence on the islands of the South China Sea, which it considers its internal waters, is increasing every year, and could potentially become a zone of international conflict.

At the beginning of the full-scale invasion of Russia, the United States immediately announced the impossibility of sending its own military to protect Ukraine.

In the event of a China-Taiwan conflict, it is not yet clear whether the US will intervene militarily or limit itself to supplying arms. The Chinese leadership does not exclude the possibility of a real US military intervention on the side of Taiwan, and this uncertainty of the US position is holding China back.

Regarding the Russian invasion of Ukraine, there is no controversy in the international community over the interpretation of this war, with rare exceptions.

Ukraine is an independent sovereign state recognized by the whole world, while Taiwan is considered a self-proclaimed state whose territory de jure belongs to China. The vast majority of countries maintain contact with Taipei on an informal level.

Unlike the situation with Ukraine, the Chinese leadership can claim that any Chinese-led invasion of Taiwan is necessary to suppress anti-government activities in one of the regions of the country, therefore, such actions will not violate international law.

Italy will supply weapons to Ukraine