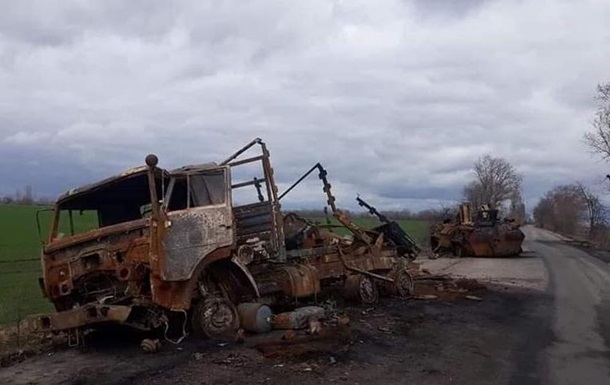 At the moment, the main efforts of the Russian Federation are concentrated in the areas of the settlements of Liman, Kremennaya, Popasnaya and Rubizhnoye.

Russian troops are completing the creation of an offensive grouping in the Eastern Operational Zone and do not stop launching missile and bomb strikes against Ukraine’s critical infrastructure. About it informed The General Staff of the Armed Forces of Ukraine in the morning report on April 18.

In the Volyn and Polesye directions, the enemy did not take active actions, signs of the formation of offensive groupings were not found. Export of damaged Russian armored vehicles from the territory of Belarus was fixed.

In the Seversk direction, the enemy is setting up positions in the areas of checkpoints on the border and in the border areas of the Bryansk and Kursk regions.

“The involvement of sabotage and reconnaissance groups and missile strikes from the territory of the Russian Federation is not ruled out,” the General Staff noted.

In the Slobozhansky direction, the Russian army continues to partially block Kharkov and is trying to fire at units of the Armed Forces of Ukraine.

“In order to expand the bridgehead on the left bank of the Seversky Donets River and create conditions for the rapid deployment of troops, the enemy conducted reconnaissance in force in the areas of Zavody, Dmitrovka and Dubrovno settlements. He had no luck, suffered losses and retreated,” the Ukrainian military leadership specified.

In the Donetsk and Tauride directions, Russian troops are restoring their combat capability and replenishing supplies. The shelling of Seversk and Pokrovsky continues.

According to the General Staff, the main efforts of the enemy were concentrated in the areas of the settlements of Liman, Kremennaya, Popasnaya and Rubizhnoye, attempts were made to establish full control over Mariupol. Offensive actions were carried out in the Severodonetsk, Popasnyansky and Zaporozhye directions.

In the Yuzhnobuzh direction, the enemy is concentrating its main efforts on holding its positions, continuing to fire at the positions of Ukrainian troops in the directions of Nikolaev and Aleksandrovka.

“It is expected that the enemy will continue to conduct combat operations to reach the administrative borders of the Kherson region. In total, 87 battalion tactical groups of the enemy are involved in the groupings to carry out combat missions on the territory of Ukraine,” the General Staff stressed.

On the territory of the Donetsk and Lugansk regions, the Armed Forces of Ukraine repelled twelve enemy attacks over the past day, destroyed ten tanks, fifteen armored vehicles and five vehicles, as well as five enemy artillery systems.

The grouping of the Air Force of the Armed Forces of Ukraine hit five air targets over the previous day: one aircraft, three helicopters and one UAV.

Earlier it was reported that as a result of the counteroffensive, the Armed Forces of Ukraine liberated a number of settlements in the Kharkiv region: Bazalievka, Lebyazhye, part of Kutuzovka, and also advanced in the area of ​​the village of Malaya Rogan further to the east.


Mariupol will be released and liberated – GUR

The enemy shelled Zolote and the sports complex in Kremennaya, there are victims