Public hearing in the Senate debates the effects of releasing pesticides

Parliamentarians and experts in agroecology discussed, in a public hearing held this Tuesday (26), the increasing release of pesticides and the impacts of the measure on the health of the Brazilian population. The discussion, which took place at the Human Rights Commission (CDH) of the Federal Senate, in Brasília, included the presentation of the Dossier against the Poison Pack and in defense of life.

According to the parliamentarian, Brazil is currently one of the largest consumers of pesticides in the world. “Brazilian legislation that regulates the use of pesticides is still very permissive and this makes us a perfect market for the poison. More than a thousand new pesticides have been released in Brazil,” he said. He also highlighted that in the Temer and Bolsonaro governments, “three new poisons are released every two days”, he pointed out.

Data from the Dossier against the Poison Package and in defense of life, organized by the Brazilian Association of Collective Health (Abrasco), Brazilian Association of Agroecology (ABA-Agroecology) and Permanent Campaign Against Pesticides and for Life, inform that between 2010 and 2015 815 pesticides were registered and between 2016 and 2020 this number more than doubled, with 2,009 pesticides being released.

“These releases are based only on economic arguments of dubious validity, since many of the products authorized in Brazil are not allowed to be used in other countries, due to their proven harmful effects on health and the environment”, points out the Dossier. 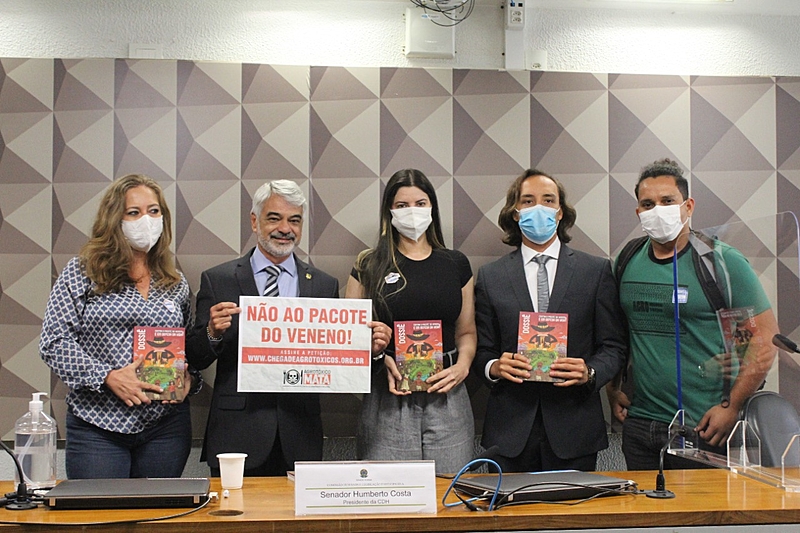 Delivery of the Dossier against the Poison Package and in defense of life, with the objective of supporting the debate on the impact of pesticides on the health of the population. / Photo: André Gouveia

The document highlights that of the total number of pesticides registered between 2019 and 2010, 19% are classified as extremely or highly toxic to human health, 22% as moderately toxic and 30% as slightly toxic or unlikely to cause acute harm. As for the environment, 51% are highly or very dangerous, 35% are dangerous and 14% are classified as less dangerous.

Abrasco’s representative, Karen Friderich, criticized the approval of the Poison Package (PL6299/2002) by the Chamber of Deputies in February this year. The package makes the use of pesticides even more flexible in the country and replaces the current legal framework (Law 7,802), in force since 1989.

Friderich said that 81% of pesticides allowed in Brazil are banned in Organization for Economic Cooperation and Development (OECD) countries. In addition, 67% of the volume of pesticides sold in the country are products that cause cancer and hormonal damage to humans and wildlife. “We eat a mixture of pesticides”.

“One of the provisions of the bill is precisely to allow the registration of carcinogenic pesticides, which cause mutations, hormonal reproductive problems and the birth of babies with malformations”, denounces the Abrasco representative. With the approval in the Chamber, PL 6299/2002 began to be processed in the Federal Senate.

Researcher Aline Gurgel, from the Oswaldo Cruz Foundation (Fiocruz), said that the proposal brings critical points of violation of food and health rights to the Brazilian population, “going against what happens in the world”.

For her, the Poison Package is a threat to the life of the entire population, in particular to the very existence of population groups in a more vulnerable situation. In addition to promoting the loss of biodiversity, the death of pollinating species and affecting the maintenance of traditional practices and family farming. “Agrochemicals are not medicines that protect crops against pests and diseases. Pesticides are poisons and have a single function, which is to eliminate life”.

:: BdF visits communities where families fall ill under suspicion of contamination by pesticides in MA ::

According to the Dossier, the process of exposure to pesticides, particularly chronic exposures, which occur at low doses and over a long period of time, causes adverse effects on human health, most seriously affecting the most vulnerable, such as pregnant women, children and the elderly. , which can affect the endocrine, neurological, immune and respiratory systems; cause DNA damage, congenital malformation and lead to the development of cancers, among other effects.

“For many of these harms, any non-zero dose is sufficient to cause harm, which implies that there is no exposure dose that can be considered safe.”

In this sense, organizations recommend the definition of more restrictive limits, regulation of substances known to be harmful to human health and the environment. In addition to adopting measures that encourage monitoring programs to identify potential sources of contamination and carry out actions to promote agroecological transition strategies for organic food production and certification.