“Capitalism has come to an end. Socialism is not a dream, it is a reality.” This is how the Indian journalist Vijay Prashad, from the International Assembly of Peoples, set the tone for the conjuncture panel of the 3rd Assembly of Alba Movimentos, an articulation that brings together more than 400 social organizations from Latin America and the Caribbean, which began this Wednesday afternoon Friday (27) in Argentina.

The meeting brings together around 260 representatives of social organizations from 23 countries in Latin America, the Caribbean and the world at the Centro Recreativo Nacional, in Ezeiza, in the province of Buenos Aires, to discuss the advances and challenges of the popular field in the region and, after 5 days of assembly, an update of the common action plan in the territories.

“Inflation is causing people to starve all over the world,” said Prashad. “The capitalist class has no idea how to solve this problem, it has led us to war,” he said, citing Afghanistan, Syria, Yemen, Ukraine. “Only socialism can end this worrying reality.”

Representing an important delegation at the assembly, that of Haiti, Camille Chalmers, leader of the Haitian Platform for the Claim for Alternative Development (Papda), gave a reading on the global moment in which, according to her diagnosis, the crisis of the capitalist system is going through an acceleration, and proposed a pedagogy of revolutions.

“The crisis is generating a growing indignation among peoples, where there are mobilizations in several countries that question certain elements that had been naturalized. But we are a rebellious people. We have to remember the Cuban, Haitian, Jamaican, Dominican Republic revolutions. revolution that produced deep ruptures with capitalism. These processes must dialogue with each other to define new paths”, he pointed out.

The construction of a socialist paradigm is the only alternative people have to face the capitalist crisis.

Representing the Brazilian delegation, Nalu Faria, from the World March of Women, pointed to the intrinsic relationship between production and reproduction in her analysis, which started from the perspective of popular feminisms. “We can say that neoliberalism is expressing its conservative essence. There is no separation between economics and politics, between production and reproduction”, she said, reinforcing the need to understand feminism as part of a broad aspect of struggles. 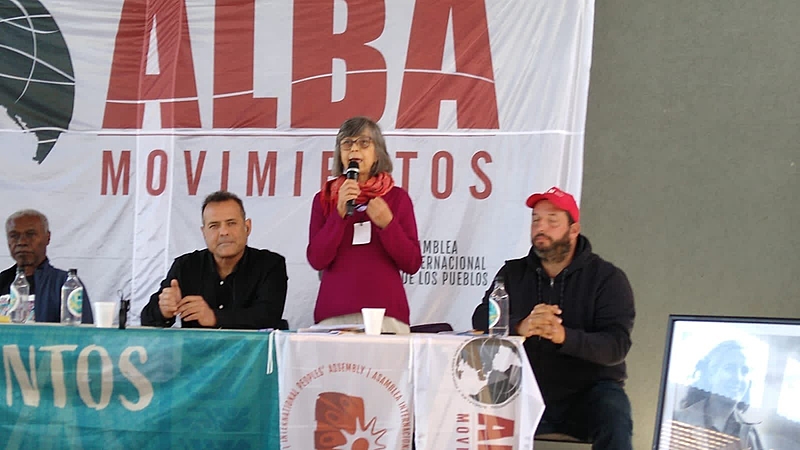 “As revolutionaries and revolutionaries, we have to strengthen the field of feminism. We talk about anti-colonial, anti-racist feminism, class struggle. It will not be possible to overthrow this class system if we defeat patriarchy, colonialism and racism”, he said.

Also present on the panel was the leader of the Unemployed Workers Movement, Lautaro Leveratto, who analyzed the concentration of land in Latin America and the Caribbean. “Only 37% of peasants and workers own land. The rest work on their employers’ farms,” ​​he denounced. “Stopping migration from the countryside to the city is key to food sovereignty. Building it implies building networks with urban organizations to generate a link between the countryside and the city, but also generating international articulations is fundamental, and that is why we are here , today, in the Assembly of Alba.”

Created in opposition to the Free Trade Area of ​​the Americas (FTAA), an economic bloc project for the region proposed by the United States, Alba Movimentos brings together hundreds of popular organizations and holds its 3rd Assembly after postponements caused by the coup d’état in Bolivia, in 2019, and the covid-19 pandemic.

Social organizations meet again, this time in Buenos Aires, Argentina, in a proposal to integrate struggles in the current context of the region – or Our America, as defined by the ALBA movements – and the world.

“We realized that we were many organizations that were targeting the same enemy, but we are dispersed, with different strategies”, says the operative secretary of Alba Movimentos Laura Capote. “With this assembly, we seek to align the debates and define what common point we have in the anti-capitalist, anti-imperialist and anti-patriarchal struggles.”

The common program was outlined in the previous assemblies, synthesized in six axes of struggle: regional unity and internationalism; ideological-cultural battle and decolonization; defense of mother earth and sovereignty of peoples; economy for good living; democratization and construction of popular power; and popular feminisms.

The Assembly takes place until the 1st of May, when the meeting will conclude with a mobilization for Labor Day in the federal capital and a march to the Plaza de Mayo.

Are you MEI and still haven’t delivered the Annual Declaration? Find out how to rectify the situation

With the end of price controls, tobacco rises less than inflation and encourages consumption

US may recognize Russia as sponsor of terrorism - Blinken