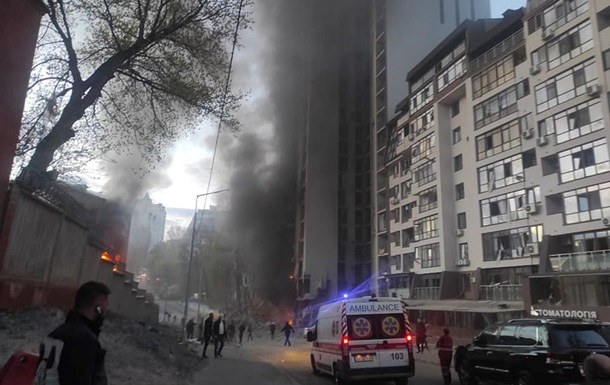 The adviser to the head of the Ministry of Internal Affairs claims that Russian troops were shelling the capital from the territory of the occupied Crimea.

In Kyiv, as a result of enemy shelling on the evening of Thursday, April 28, a residential building was partially destroyed. Previously, 10 civilians were injured. Such data lead in the State Emergency Service.

As indicated, as a result of the attack, a fire broke out in a 25-storey residential building with partial destruction of the first and second floors. An hour later, around 21:30, a fire on a total area of ​​100 sq. m was eliminated.

Five people are believed to have been rescued. Search and rescue work continues.

At the same time, Advisor to the Minister of Internal Affairs Anton Gerashchenko from the scene informsthat six residents of the mentioned building were hospitalized. According to him, there could have been more victims, but since the house is new, it was not fully occupied.

The adviser also claims that Russian troops were shelling the capital with cruise missiles from the territory of the occupied Crimea.

Recall, Kyiv was subjected to rocket fire during the visit of UN Secretary General António Guterres. There were at least two explosions.

In this regard, the head of the President’s Office, Andriy Yermak, called on Ukraine’s allies to deprive Russia of its veto right in the UN Security Council.

Zelensky: Evacuation from Mariupol is possible