This Friday (29), union centrals and popular movements are holding acts in Bogotá and in the main cities of Colombia to celebrate one year of the biggest general strike in the country’s history. Some demonstrations started on Thursday night (28) and also denounced the state of “humanitarian emergency” due to the violence unleashed in the country.

According to Peace Development Institute (Indepaz)in 2022 alone there were 36 massacres with 66 victims, among former guerrillas and social leaders.

The United Nations (UN) condemned the repression of the 2021 general strike, which ended with a toll of 80 homicides, 4,285 cases of police violence, 81 victims of eye injuries caused by police shooting and 379 people missing, according to a survey of human rights organizations.

“We demand that the government comply with all agreements signed in different Colombian communities. There is no effective policy to protect social leaders. Since the signing of the Peace Accords, there have been more than a thousand social leaders murdered and no clarification from the Public Ministry, all cases remain unpunished”, he says, in an interview with Brazil de factoMarylen Serna Salinas, from the national direction of the Congreso de los Pueblos.

On April 28, 2021, trade union centrals, popular movements and student organizations called for a national demonstration to repudiate the university and tax reforms promoted by President Iván Duque. In the face of repression, the acts increased and ended up initiating the biggest general strike in the country’s history, with demonstrations and barricades maintained for more than two months in different regions of Colombian territory.

“The symbiotic action between the military and paramilitaries and false flag operations against social organizations in the regions left a balance of at least 22 social leaders murdered until February 2022”, says the UN peace mission in communiqué.

Protests in the capital and in the states of Cauca, Valle del Cauca, Norte de Santander and Córdoba went to the Public Defender’s Office to demand respect for the 2016 Peace Accords and protection for social leaders.

After the end of the general strike, the government committed itself to reforming the police forces and guaranteeing the right to free demonstration.

“The demonstrations had a positive impact, as they strengthened democracy, the participation and expression of many sectors, especially young people, and allowed the social movements to have greater articulation and joint work”, evaluates Marylen Salinas. 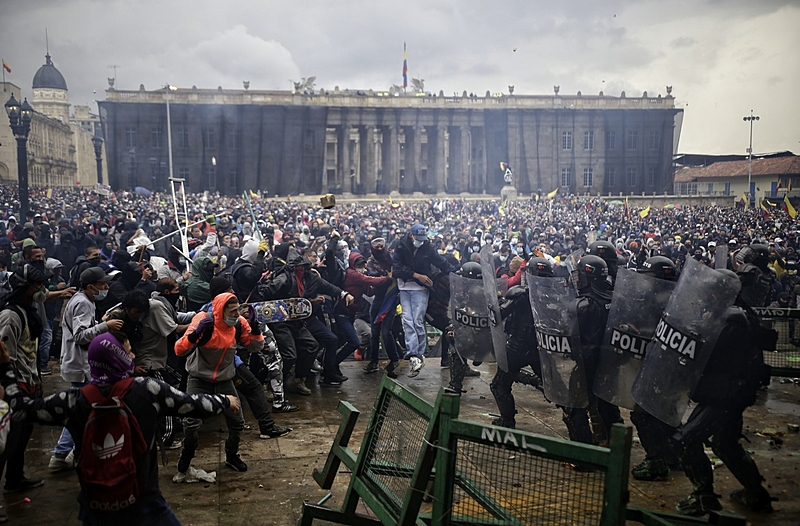 A call for a unified act between students and workers on April 28, 2021 started the biggest general strike in the history of Colombia / Colombia Informa

The protests this Friday (29) also mark the one-month countdown to elections in Colombia. For the first time in history, a candidate from the progressive camp is favored for the presidency.

According to the company’s latest opinion polls Invamerthe Historic Pact ticket, with Gustavo Petro and Francia Márquez, has 43.6% of the voting intentions, being able to contest an eventual second round against the candidacy of Federico Gutiérres, from the right-wing alliance Equipe pela Colombia, with 26.7% of preference.

Next are businessman Rodolfo Hernández, from the Anti-Corruption League, with 13.9% of the voting intentions, and Sergio Fajardo, from the Centro Esperança coalition, with 6.5%.