End of hyperinflation, positive growth projections, stable exchange rate and lowest inflation in the last decade. These are the elements that dominate the debate on Venezuela’s economy in the first months of 2022 and make the promised economic recovery once again a topic of discussion among various sectors of the country.

Amid skeptical and optimistic views, the debate took on new contours at the end of April and at the beginning of May, when announcements made by President Nicolás Maduro and the installation of dialogue tables between the government, businessmen and unions promised to advance in one of the fundamental points to overcome the crisis: the recovery of wages.

Despite the fact that the minimum wage increased by more than 1700% at the beginning of March, from 7 to 130 bolivars (about 29 dollars), a readjustment greater than inflation, Venezuela continues to have the lowest minimum wage in Latin Americathe result of an intense crisis that started in 2014 that generated a devaluation of the national currency, a hyperinflation that lasted four years and a drastic reduction in income due to the drop in the international price of oil and the economic sanctions imposed by the US.

According to data from ECLAC (Economic Commission for Latin America and the Caribbean), the minimum wage in the country fell by more than 80% between 2014 and 2020. Annual inflation stood at 284.4%, according to the Central Bank of Venezuela ( BCV).

:: In the process of recovery, Venezuela registers the lowest monthly inflation in the last decade ::

It was with this economic scenario in mind that, in front of a crowd of supporters gathered in Caracas on the 1st of May to celebrate International Workers’ Day, President Nicolás Maduro promised to start a process of reviewing all the country’s collective agreements to “generate wealth with organic bolivars and walk towards the recovery of the minimum wage and salary floors for all workers in the country”.

In addition, the president announced other measures that aim to strengthen the purchasing capacity of the population “in the midst of this imperialist economic war”. Among them are the creation of a bonus of 10,000 bolivars (about US$2,253) for retirees, the inauguration of a digital bank for the payment of social benefits to workers and a package of labor adjustments for different categories, from domestic workers to motoboys, which will be debated by the Legislature.

“The second half of this year will be twice as good as what we have seen in recent months, we will undoubtedly recover the social welfare state of Bolivarian socialism thanks to the working class, the people and also, we have to say, the entrepreneurs patriots who believed in Venezuela,” said Maduro.

The proposal to revise collective agreements and salary floors was also raised during the Social Dialogue Forum, which set up negotiation tables between the government, employers and union representatives, with technical support from the International Labor Organization (ILO), on the 26th of April. 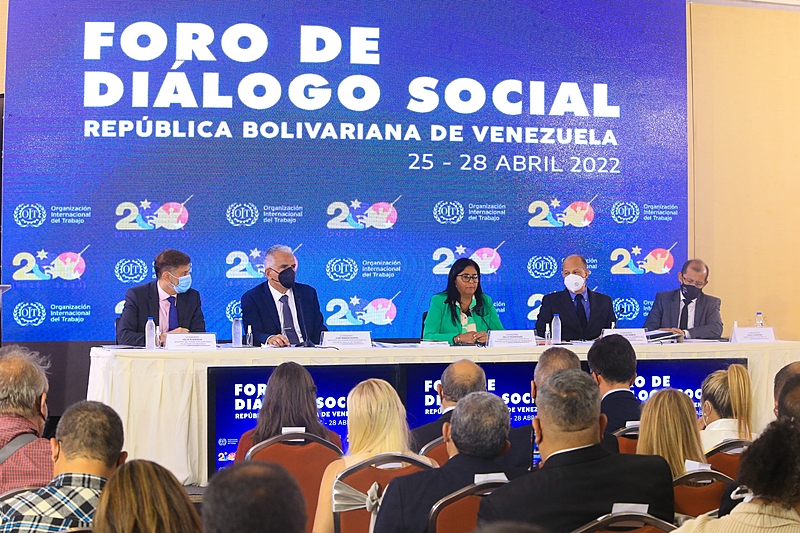 Among the objectives of the dialogues, whose second round should take place in the coming months, are the review of the minimum wage, the return of expropriated companies and possible changes in the country’s labor legislation. Carlos Fernández, president of the largest employers’ organization in Venezuela, Fedecâmaras, even said, in an interview with Union Radiothat the first conversations between the 120 participants of the Forum “were very successful”, but that any announcement about salary increases will depend on the “increase in national productivity”.

In an interview with Brazil de factoeconomist Judith Odreman said she believed that the expansion of business monopolies and the flight of skilled labor, a consequence of the migratory wave that the country suffered in recent years, led to a process of “unequal division of income”, which generated distortions in the salary.

However, for the specialist, the dialogues between economic and governmental sectors allied to economic indicators that remain stable are positive facts that must be seen within the current context of the country.

“The Maduro government has made efforts in this direction to recover wages, and negotiations are taking place in the face of this situation where there is a shortage of skilled labor, capitalist production relations, fiscal difficulties and the concentration of monopolies, which lead to this situation of wage distortion. ”, he explains.

The possibility of recovering wages in the short term through established dialogues is contested by Ronald Balza, professor of economics at the Andrés Bello Catholic University (UCAB). For the economist, the government’s lack of transparency on economic indicators such as GDP growth, performance in strategic sectors and relations with the private sector generate “insecurity” for economic agents and are an impediment to the redistribution of income in the country.

“Suppose I own a company and I’m going to hire the workers, paying what I want and how I want it. That can’t be the case. There are limits to the minimum wage that must be acceptable to companies, negotiated with workers. and supported by the public administration. Now the ILO comes to Venezuela and then the government says that, now, wages will improve. I don’t believe that until they publish this data and are willing to discuss it with this data in hand”, he says. .

In his speech during the May 1 rally, Maduro referred to the latest increase in the minimum wage and said the measure was just the beginning of the recovery. “The increase in all salary floors is based on the country’s real wealth, in organic bolivars that do not generate inflation, based on the recovery of the economy,” said the president.

Although the minimum wage has been raised to 29 dollars and, added to the food bonus, it reaches 39 dollars, the value is still low.

Despite the country having ended the cycle of hyperinflation, presenting the lowest monthly inflation in the last decade in March and having achieved some exchange rate stability against the dollar (the current exchange rate for the bolivar is 4.54 to 1 dollar), the years of gigantic price increases and the effects of economic sanctions that make it difficult for foreign exchange to enter continue to erode the purchasing power of Venezuelans.

Opposition to the Venezuelan government reinforces the challenges that the Maduro government will face. The Venezuelan Finance Observatory (OVF), a non-governmental organization linked to the opposition, points out that the cost of basic food basket for the month of March it was 187 dollars and the current minimum wage would only be able to afford 10.5% of the products listed.

Odreman says that if inflation in the coming months of 2022 remains in single digits and the exchange rate remains stable, the scenario may be increasingly favorable to the purchasing power of Venezuelans.

“There is an expectation that people can continue to maintain themselves with a salary level between 30 and 50 dollars, especially if there is a new increase. With that, a person can support themselves, even if it is not enough for the basic food basket that a population requires”, she says.

:: To encourage the use of the national currency, Venezuela adopts a new tax on dollar transactions ::

In addition to the deterioration in the purchasing power of workers, Venezuela is undergoing a process of forced dollarization, as a result of years of hyperinflation and devaluation of the local currency. The problem has been approached with caution by the government so that prices and exchange rates remain stable.

Measures such as injections of dollars into the economy by the Central Bank and the creation of a tax for payments with foreign currencies, the so-called IGTF, which aim to control the exchange rate and encourage the use of bolivars in daily transactions respectively, seem to give the first results.

According to one study of the OVF, payments in bolivars increased by 3.7% in April compared to the previous month, representing 53.2% of all commercial transactions carried out in the country. “This is basically explained by the entry into force of the tax on large financial transactions, whose most important effect was to penalize the use of the dollar as a form of payment”, points out the agency.

Dollarization also experienced a retraction in salary payments as, according to the OVF, 63% of the country’s salaries in April were paid in US currency, an amount lower than the 69% recorded in March.

For Balza, the fight against inflation is exclusively up to the government, which should be able to generate income and create reserves to finance itself without the need to issue currency. The economist goes further and says that the strategy should not be limited to combating or allowing the use of dollars, but rather enabling a greater volume of circulation, whether in national or foreign currency, to generate more transactions.

To grow: how much, to where and for whom?

Despite the difficulties generated by the US sanctions and the fact that the resumption of oil production is still modest, international organizations continue to project good growth rates for the Venezuelan economy.

After the investment bank Swiss credit affirm that the country could grow up to 20% this year, the ECLAC estimated that Venezuelan GDP is expected to grow by 5% in 2022, the highest among all South American countries and the 3rd highest in all of Latin America.

Professor Ronald Balza believes that, in fact, the country can grow at the levels indicated by international organizations depending on the reference indices that are projected and the investments that occur in the Venezuelan economy this year. Despite this, the economist says that this growth will not be reversed in salary improvement for all categories.

“When any institution makes a projection and says 20% or 5%, we must ask what was the GDP they calculated for the year 2022. Recovery is possible, but regarding an improvement in wages that is the result of this growth, I believe that will only be possible in some activities, for some income levels and for some work specialties, not for all”, he says.

For Odreman, however, the government should take advantage of the stability in inflation and exchange rate indicators to increase domestic demand, reactivating national production, not only in the oil industry, but mainly in areas of the economy that generate jobs and are not linked to the rentier sector, such as the food, manufacturing and construction sectors.

ARTICLE | It is necessary to cut the force of the coup in Brazil, and it resides in the Planalto Palace

In RN, the Northeast Fair of Family Agriculture and Solidarity Economy exhibited more than 200 products

A school was bombed in the Lugansk region: people were hiding there