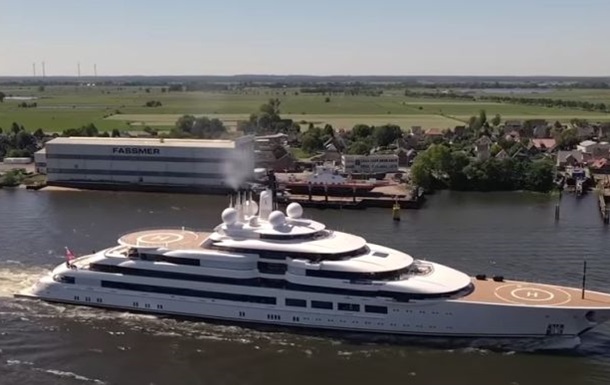 Putin will no longer need a yacht

The investigation by the Italian authorities “revealed the presence of significant economic and business ties of the beneficial owner of the vessel.”

All over the world, the hunt continues for the assets of Russians close to the regime of Vladimir Putin, who unleashed a full-scale war against Ukraine. In Italy, in the port of Marina di Carrara in Tuscany, a 140-meter yacht Scheherazade was detained, the owner of which, according to Italian investigators, is associated with the Russian authorities. And, perhaps, this is not an easy yacht.


What do Italians say

An investigation by the Italian authorities “revealed the presence of significant economic and business ties between the beneficial owner of the Scheherazade vessel with prominent representatives of the Russian government and with other entities”, against which the EU imposed sanctions due to the war in Ukraine, the Italian Ministry of Economy and Finance said in a statement.

The Financial Security Committee of Italy, which monitors compliance with the EU sanctions regime, proposed to include the owner of the superyacht in the sanctions list for Ukraine. Prior to the adoption of these restrictive measures, Italian Minister of Economy and Finance Daniele Franco decided to freeze the asset.


State yacht of the Russian Federation

In March, the team of Russian opposition leader Alexei Navalny released an investigation into Scheherazade’s $700 million yacht. Officially, its owner is unknown – the documents indicate an offshore company from the Marshall Islands. Navalny’s team claims the yacht is owned by Russian President Vladimir Putin. According to the authors of the investigation, employees of the Federal Security Service, which is engaged in the protection of federal authorities, primarily the president, work on the ship.

The New York Times admitted that Scheherazade’s yacht was owned by a Russian billionaire “or a Russian with super connections – even Mr. Putin.” The ship’s captain, British citizen Guy Bennett-Pearce, denied to The New York Times that Putin owns the yacht or has ever been on it.

The yacht has six decks. The main deck houses six guest cabins, a state dining room, a spa, massage rooms, saunas, a gym, diving and fishing equipment, Navalny’s team says. The New York Times wrote that the boat has a pool with a retractable roof that turns into a dance floor, and gold-plated lamps hang in the bathrooms.

The yacht has two helipads and a helicopter hangar on the main deck. On one of the upper decks there is a giant living room, dining room, two VIP cabins and a mechanical piano, which, according to a crew member, plays itself. There is also a billiard room, and the table is equipped with a mechanism that allows it not to tilt when rolling. The ship has three fireplaces: two gas and one wood. Navalny’s team points out that a wood-burning fireplace is a huge rarity, even for superyachts.

The owner’s deck is divided into two zones. The first is the master’s area with his bedroom, separate private spa, Jacuzzi bathroom, dressing room and office. And the second area on this deck is the owner’s companion area, which consists of a huge bedroom, a jacuzzi bath and a dressing room.

Scheherazade is the only one of 14 yachts over 140 meters in length in the world whose owner has not been publicly disclosed.

In total, according to the crew list received by the investigators, 23 people work on the yacht: the captain of the vessel, Guy Bennett-Pierce, is a citizen of Great Britain, and all the rest are citizens of Russia. Using the passport details of the crew members and the leaked air travel data, the participants in the investigation found out that people working on the ship fly to Italy as a watch.

The senior assistant to the captain of the ship Sergey Grishin, as the investigation showed, is recorded in the phones of various people as Sergey FSO, and is registered at the address in Sochi, where the security service in the Caucasus of the FSO is located. Some other crew members are registered at the same address.

Zelensky: in case of “referendums” Russia will lose chances for negotiations

Colombians question extradition of Gulf Clan leader to US

There are still civilians at Azovstal - Kirilenko