Amid shouts of “Lula, warrior of the Brazilian people”, presidential candidate Luís Inácio Lula da Silva was received in the capital of Minas Gerais, on Monday night (9). The act “Lula embraces Minas Gerais” marks the launch of the pre-candidacy of the Lula/Alckmin ticket in the state.

The meeting, which took place at Expominas, in Belo Horizonte, filled the area destined for the event. Thousands of people were present and many followed the activity outside. 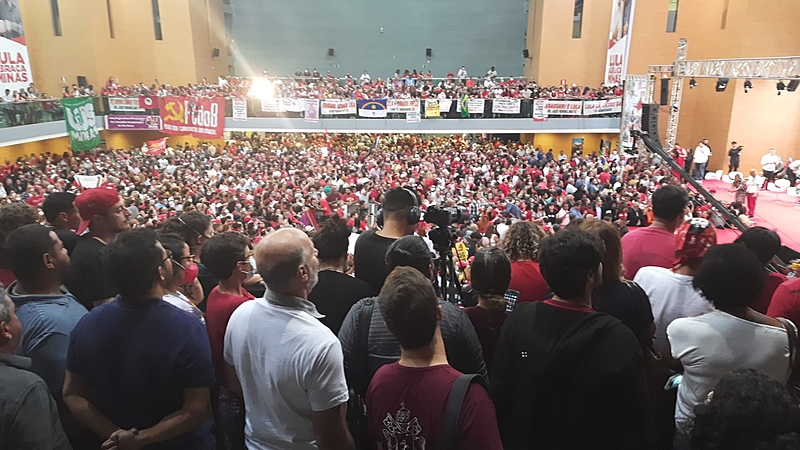 In addition to caravans from all regions of the state, the event was attended by representatives of workers’ unions, collectives, student organizations, popular movements and political parties.

Among the authorities who made up the platform alongside Lula are the state presidents of the PT, PCdoB, PSB, Rede, Solidariedade and PSOL. In addition, the former president was accompanied by representatives of the Landless Rural Workers Movement (MST), the Movement of People Affected by Dams (MAB), the National Student Union (UNE), the Popular Brazil Front, former ministers , councilors, state and federal deputies.

During the event, conducted by Aline Calixto and Flávio Renegado, the speeches were affirming the need to build another country project. Fighting hunger, repeal of labor and social security reforms, and quality jobs were some of the flags raised.

“We have proved that it is possible to increase the minimum wage, take care of agriculture, put people from the periphery in universities and children in technical schools,” Lula said when calling on supporters to engage in dialogue with people during the election campaign.

“I want to be a candidate for a movement: for people who like peace, who have love, who have sensitivity, who cried with their relatives who died with the pandemic. I want to be a candidate for people who have become unemployed, for the 19 million who are starving, for the millions of Brazilians who go out to look for a job every day and return home without it”, emphasized the former president.

During the week, Lula travels through Minas Gerais. On Tuesday morning (10), at 11 am, the pre-candidate participates in an activity in Contagem, in the Metropolitan Region of Belo Horizonte.

On Wednesday (11), Lula’s agenda will be in Juiz de Fora, in the Zona da Mata of Minas Gerais.

The head of the EC announced progress in negotiations with Hungary

Putin's words about NATO called absurd at the White House