Occupants shelled Donbass with greeting cards from May 9 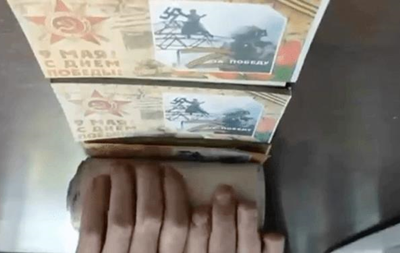 The Russian military fired shells with leaflets in which they “congratulate” local residents on Victory Day.

The militants fired at Svitlodarsk and Luhanske with propaganda leaflets with the inscriptions “For victory”, wishing the Ukrainians “peace, health and happiness.” This is reported by the Russian media.

A video distributed by Russian journalists shows how one of the militants, addressing the residents of the Luhansk region, wishes them “peace, health and happiness.”

“Separately, we congratulate the residents of the settlements of Svetlodarsk and Luganskoye. We send them greeting cards. Wait, dear ones, we will soon come and free you … Happy Victory Day!” – said the military and ordered to open fire.

Recall, on May 9, the Russian military shelled 13 settlements of Donbass, destroying about 40 houses and other buildings. Twelve civilians were killed as a result of these attacks, and seven more were injured.