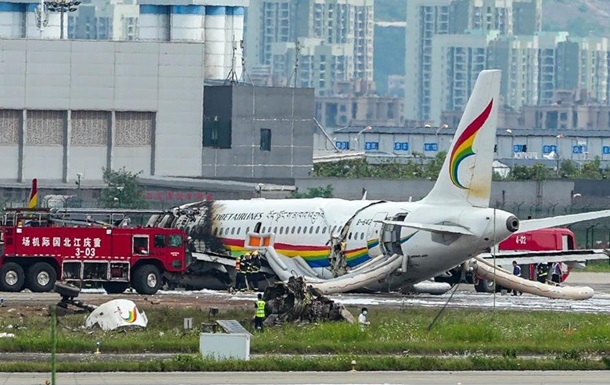 All people were evacuated, and the injured were hospitalized

On board the Tibet Airlines passenger plane were 113 passengers and nine crew members.

In southwest China, at least 25 people were injured when an airliner ran off the runway and caught fire at an airport in the city of Chongqing. On Thursday, May 12, reports Xinhua with reference to the administration of the airport terminal.

The incident happened at 8:00 am local time. According to preliminary information, there were 113 passengers and nine crew members on board the Tibet Airlines Airbus A319 passenger aircraft.

All people were evacuated, and the injured were hospitalized. They are currently receiving medical attention. The fire is extinguished.

Meanwhile, information appeared on social networks about at least 40 victims of the plane crash.

Recall that in March, a passenger Boeing 737 of China Eastern Airlines crashed in southern China. The plane crashed in a mountainous area. There were 133 people on board. They all died. Video of the plane crash has gone viral.


US military tiltrotor crashes during exercise in Norway

Russia does not stop offensive in Donbas - General Staff

Cleaners Vs. Disinfectants: What You Need to Know