Indigenous leader Aílton Krenak is the newest Doctor Honorary from the University of Brasilia (UnB). He is the first indigenous person to receive the title from the university. The recognition, one of the most important of the institution, is granted to personalities who have stood out for their knowledge or work in favor of the arts, sciences, philosophy, letters or better understanding between peoples.

The delivery took place this Thursday afternoon (12), in the auditorium of the University Council (Consuni), which is located on the Darcy Ribeiro campus. The date was set in memory of the official launch of the Aliança dos Povos da Floresta, which took place on May 12, 1989, in São Paulo, under the leadership of Ailton Krenak, from the Union of Indigenous Nations (UNI), and Chico Mendes, from the National Council of the Rubber Tappers (CNS). 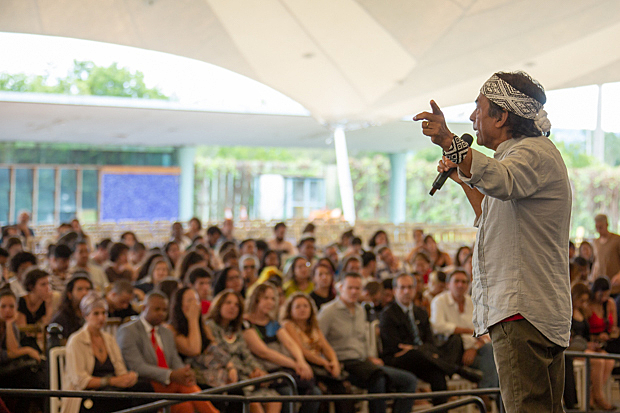 Aílton Krenak during an open class at the University of Brasília, in March 2020 / Reproduction

Ailton Krenak is one of the most prominent Brazilian intellectuals today and a historic leader of the national indigenous movement. He is a member of the Krenak (or Borun) indigenous people, and lives in the Rio Doce Valley, in Minas Gerais.

Born in 1953, in Itabirinha (MG), Krenak gained national notoriety in the 1980s, in the process of fighting for the country’s redemocratization, which culminated in the approval of a new Federal Constitution, in 1988, which guaranteed the original rights of indigenous peoples. Brazilians.

“I ended up constituting myself as a collective subject, with a deep experience of belonging to this land, to this territory, to this part of the planet that we cling to in such a determined way, that we face any challenge to honor this Mother Earth”, he said, emotional, in the speech after receiving the honor, attributing this recognition not to his person, but to the community of which he is a part.

:: Krenak: “Everyone should arm themselves with voter registration and put a stop to this ignorant right” ::

In his demonstration, Krenak spoke about taking a leap of knowledge, and countered the mystification he makes around people’s genius.

“When someone manages to make a leap in quality, he is considered a genius. It’s just that the West loves to do this kind of mystification. In fact, in other cultures, [gênio] he is an awakened being. The awakened being is capable of causing, of promoting that which is called disruption. Disruption is not just an event of technique, it is of knowledge. One can leap into knowledge as long as one is willing to be an everyday experience of an alert mind. We are beings who can live in a permanent state of consciousness. It is precisely being alert that is what the West calls genius. Let’s stay alert, let’s be genius.”

Dean of UnB, Professor Márcia Abrahão said that this type of tribute is a way of honoring the university itself.

“We who are honored to have on our list Honorary to have someone with Aílton Krenak from now on. UnB in its 60 years shows its priorities, what the university thinks of knowledge and knowledge”, she said. She also said that the title is a tribute to the memory of anthropologist Darcy Ribeiro, founder of UnB, an ally of indigenous peoples.

The recommendation to honor the indigenous leader was made by the university’s Center for Advanced Multidisciplinary Studies (Ceam) and had been approved by Consuni in December last year, by acclamation.