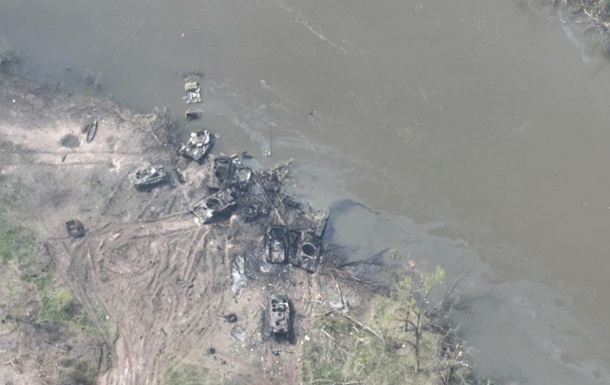 The enemy unsuccessfully tried to force the Seversky Donets

Ukrainian artillery destroyed the Russians’ pontoon bridges, resulting in 485 casualties and damage to more than 80 pieces of equipment.

While trying to cross the Seversky Donets River on May 11, Russian troops lost 88% of the 74th motorized rifle brigade. These are 485 servicemen out of 550 sent there. In addition, more than 80 units of enemy equipment were damaged. About it informs American Institute for the Study of War (ISW).

“Russian troops made significant tactical mistakes when attempting a large-scale crossing of the Seversky Donets River from Kremennaya. The Russian command sent 550 servicemen of the 74th motorized rifle brigade of the 41st combined arms army to force the Seversky Donets River in order to cordon Ukrainian troops near Rubizhne from the northwest On May 11, Ukrainian artillery destroyed Russian pontoon bridges and densely concentrated Russian troops and equipment around them, resulting in 485 casualties and damage to more than 80 pieces of equipment.

It is noted that on March 8, the 74th motorized rifle brigade tried to cross the Desna River in the Chernihiv region, but then did not suffer such failures.

“The command and headquarters of the unit may not have realized the danger that the improvement in Ukraine’s artillery capabilities two months later has created, or are simply incompetent or unable to control their troops,” analysts say.

Recall that the Armed Forces of Ukraine destroyed the enemy’s crossing on the Seversky Donets.

It was also reported that Russian troops were again preparing to cross the Seversky Donets.

Russian Foreign Ministry reacted to the arrival of NATO in Scandinavia