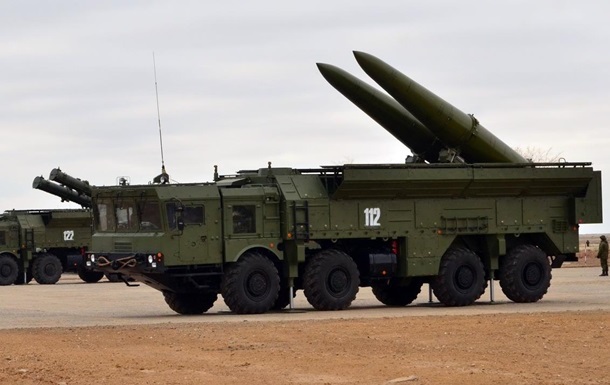 Russia uses OTRK Iskander in the war against Ukraine

The deployment of additional means of electronic intelligence in the regions of the Gomel region of Belarus bordering with Ukraine was also noted.

Russian troops deployed launchers of the Iskander-M missile system in the Belgorod region. informs The General Staff of the Armed Forces of Ukraine in the morning summary on Sunday, May 22.

“In the Belgorod region, the enemy has deployed launchers of the Iskander-M operational-tactical missile system. In addition, the enemy is expanding the system of logistics and repair bases,” the report says.

In the Volyn and Polesye directions, units of the Belarusian Armed Forces have stepped up their reconnaissance, and the deployment of additional electronic intelligence equipment in the regions of the Gomel region bordering Ukraine was also noted.

In the Seversky direction, the enemy continues to shell settlements and infrastructure facilities in the Sumy and Chernihiv regions, as well as in the areas of the settlements of Boyaro-Lezhachi, Ulica, Bunyakino, Gorki, Gremyach and Muravie.

“In the Slobozhansky direction, the enemy, with the help of individual units from the 6th combined-arms army of the Western Military District and the Baltic fleet, is conducting military operations in order to hold the occupied lines in the Kharkov direction and prevent our troops from reaching the state border,” the General Staff reported.

The grouping of the aggressor forces is preparing for the resumption of the offensive in the Slavic direction. The invaders carry out artillery shelling in the areas of the settlements of Vernopolye, Dibrovna and Dovgenkoye.

In the Donetsk direction, the aggressor tried to break through the defenses of the Ukrainian troops and reach the administrative borders of the Lugansk region.

The enemy launched air strikes on civilian infrastructure in the areas of the settlements of Vrubovka and Bakhmut.

In the Liman direction, the aggressor did not conduct active hostilities, but fired at infrastructure facilities in the area of ​​​​the settlements of Liman, Ozernoye, Zakotnoye, Dibrova and Serebryanka.

“In the Severodonetsk direction, using mortars and cannon artillery, the enemy is shelling the positions of the Defense Forces along the entire line of collision, concentrating efforts in the direction of the settlements of Severodonetsk and Lisichansk. The enemy conducted offensive and assault operations in the areas of the settlements of Oskolonovka, Purdovka, Shchedrishchevo and Smolyaninovo. The offensive was repelled , the enemy suffered losses and was forced to withdraw to their old positions,” the message says.

In the Bakhmut direction, the aggressor tried to improve the tactical situation in the areas of the settlements of Trypillya, Lipovo and Vasilyevka with the support of artillery, the fighting continues.

In the Avdeevsky direction, the invaders suffered losses in the area of ​​​​the settlement of Krasnogorovka.

On the Kurakhovsky direction, the aggressor led an assault in the area of ​​Maryinka, was defeated. He fired at Novomikhailovka and Vladimirovka, and also launched air strikes on the settlements of Nikolskoye and Katerinovka.

In the Novopavlovsk and Zaporozhye directions, the enemy tried to gain a foothold on the occupied lines, fired at the positions of the Ukrainian Armed Forces and civilian infrastructure.

“In the Yuzhnobuzhsky direction, the enemy did not carry out active hostilities. He focuses his main efforts on maintaining occupied lines, conducting reconnaissance and measures for engineering equipment of positions. He fired at the positions of the Defense Forces using mortars and cannon artillery. He is building up the air defense system,” the General Staff said. .

In the Bessarabian direction, the situation is unchanged.

Earlier, the General Staff said that 10-14 Russian missiles fly to Ukraine every day. Each such rocket carries 400-600 kilos of TNT.