What should non-indigenous people learn from native peoples to prevent the sky from falling?

“People from heaven… These white people have to stop. They are passing poison, destroying everything. The day nature ends, human beings will end too. It seems that white people are blind. It looks like they are deaf.”

Leila Rocha drinks mate looking at the river every morning. At 59 years of age, the Guarani Ñandeva leader from the municipality of Japorã, in Mato Grosso do Sul (almost on the border with Paraguay), says that he has to endure seeing, every day, the bush disappear and the waters of the river decrease.

It was there, in the Yvy Katu Indigenous Land (TI), that Leila grew up. She remembers when, at age 8, her community was expelled, sent “by force” by Funai to a “tight” reserve and saw their land taken over by farmers. On occasion, she promised her father that she would return. Decades later, she complied.

Leila is a member of the Board of Aty Guasu (Grand Assembly of Kaiowá and Guarani) and of Kuñangue Aty Guasu (Grand Assembly of Kaiowá and Guarani Women). She participated in the Yvy Katu IT retake in 2003 and, after being evicted, was also in the other retake, made in 2013. She has lived there ever since. But the land – which is demarcated and pending approval – is no longer the same. It is in the middle of a state taken over by livestock, by plantations of cane, corn and transgenic soy.

according to MapBiomas, soybean plantations alone occupy 36 million hectares in Brazil, equivalent to 4.3% of the national territory. It’s a larger area than countries like Italy or Vietnam.

A being that produces its own end

O poison in the river mentioned by Leila comes from agribusiness pesticide spraying that, so systematic in Mato Grosso do Sulwere defined as “chemical aggressions” by prosecutor Marco Antônio Delfino, of the Federal Public Ministry, in complaints he carried out against the practice.

The Cerrado is also one of the regions of the country that was highlighted in the report of the Intergovernmental Panel on Climate Change (IPCC) of the UN, released in April. If there is a predicted increase in the average temperature of the Earth of 4ºC to 5ºC, the forecast is that the rains in this area of ​​Brazil will reduce by 20%.

:: New IPCC report highlights that the world would have an increase of 3.2ºC with current climate policies ::

Also according to the UN report, made from about 18,000 scientific publications, if the planet does not reduce greenhouse gas emissions by almost half by 2030, a global catastrophe will be inevitable.

And Brazil has been making its contribution for the planet to advance rapidly in this direction. Data from the NGO Global Forest Watch released at the end of April indicate that the country was responsible for 40% of the world’s deforestation in 2021.

In the book the fall of the sky, Yanomami shaman and leader Davi Kopenawa describes that “white people don’t think much ahead in the future. They are always too preoccupied with the things of the moment.”

“The forest is alive. It will only die if the whites insist on destroying it”, prophesies Kopenawa: “Then we will die, one after the other, both the whites and us. All shamans will eventually die. When there are none of them left alive to support the sky, it will collapse.”

Kopenawa explains that he co-authored those words with anthropologist Bruce Albert so that whites would understand them and be able to say “the Yanomami are different from us, (…) their thinking follows paths other than that of the commodity”.

And merchandise, says Leila Rocha – in a calm tone of voice, almost at odds with what one would expect from someone who has had to explain the obvious for so long – is useless if life cannot exist.

“People do not understand the struggle of indigenous people. They think it’s because of the land. It’s not that. We fight for nature, for the river, for traditional medicines, so that the trees can stay where they are”, he says. “Nature also feels pain, just like human beings”, he says.

“It’s hard to get that into white people’s heads. When you say it, it seems like the person understands everything. But you don’t really understand, right? All he thinks about is destroying, passing the tractor, burning the riverbank. But we human beings need that water. We will never live without water”, says Leila Rocha.

“Ruralists, farmers, are devourers of nature. And they can’t think they’re killing their own lives. If one day the water runs out, we humans will not survive. Even a ruralist with all the wealth he has. Ruralist drinks water too,” he points out.

But while some insist on destroying nature, others strive to save it. After decades of living in two villages of 26 hectares each, the Guarani Mbya of the Tenondé Porã TI, located in the Parelheiros region, south of São Paulo, began, in 2013, a process of reclaiming their land.

:: Retaking all over the country: indigenous people occupy their ancestral lands, even though they are under attack ::

There are currently 14 villages. Six of them – Small Memories, Beautiful, Small Maybe, Small Fire, Green Forest and Sunshine – foram resumed in 2020 for approx.

The dispersion over a wider territory has allowed, in recent years, the indigenous people to resume aspects of the nhandereko, the Guarani way of life. A part of this set of practices and knowledge is traditional agriculture, previously made impossible by the lack of space. 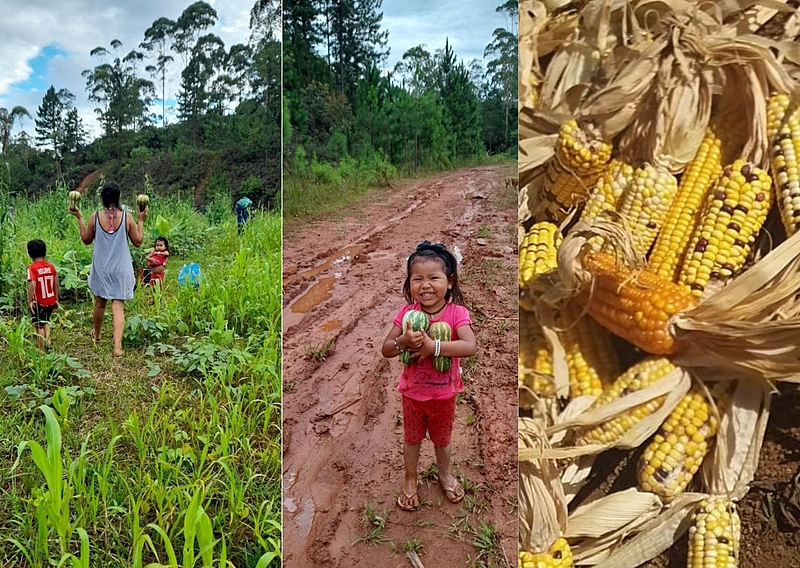 In 2020, 35% of the population of the Tenondé Porã Indigenous Land was involved in the work of traditional swiddens / Clarisse Jaxuka

Second survey by the Center for Indigenous Work (CTI) in six of the villages, in 2020 there were already 80 indigenous swiddens, cultivating 190 agricultural varieties. Among them, different species of corn, cassava, potato, beans, pumpkin and banana.

The gardens were developed from the use of seeds exchanged and also kept as a treasure by the Guarani elders, the xeramoĩ e as xejariy.

Juxuka Mirῖ, called Clarisse in Portuguese, works in the fields of the Kalipety village (resumed in 2013) and is also the coordinator of the Guarani Yvyrupa Commission.

“We have several types of potatoes: purple, white, yellow. And corns too. It has black, red, white, yellow, colored. We managed to rescue the old corns. I’m very happy. When I was a child it was very difficult to see this corn”, says Jaxuka, who is currently 37 years old. “Sometimes I think… There are some elders who are no longer with us, who fought so hard to see this… You know?”

“The world does not end, but we do”

Jaxuka has a memory of, at age 12, hearing for the first time the my ancestors’the older ones, talking about the importance of maintaining indigenous practices and knowledge to prevent capitalist greed from destroying human life.

“This has been said since ancient times. not only juruá [não indígenas] right, but even us Guarani: if we don’t know how to take care of nature, our prayers, if we start to forget our own, our languages…”, says Jaxuka: “The world doesn’t end. But we’re done.”

“Today this world is really crazy. Nature lives, nature cries, nature screams – and no one listens anymore”, summarizes Leila Rocha. “I hope that one day white people understand that indigenous people are guardians. We don’t just fight for the land. We fight for all of us.”

After 8 years of the Ayotzinapa Case, soldiers are convicted and family members accuse pact of silence