Proposals for collective mandates are a bet for renewal in politics

A new form of representation in the exercise of political mandates grows in the country and gains more and more space in the electoral dispute in the Federal District. Collective or shared mandates are the bet of pre-candidates that seek mechanisms of inclusion and renewal within the political system.

In the country, the first collective term was elected in 2016 to occupy the Municipal Chamber of Alto Paraíso de Goiás. In 2020, applications for collective mandates grew significantly, with 318 registrations in the Superior Electoral Court (TSE), the modality guaranteed the election of 24 mandates shared throughout Brazil.

The socio-environmentalist and pre-candidate for the Collective Mandate Bem Viver, Thiago Ávila, highlights that the acceptance of the proposal of collective mandates as a path to popular power draws the attention of voters. He says he is convinced “that in these elections we will have the first collective mandates elected in the capital, both for the district and federal chambers”.

For Ávila, it is necessary to point a way “to the great crisis of this [político] not from an attempt to gloss over their problems, nor delude people into believing they change things just by pushing a button every four years.”

“Collective mandates make a broader call for the mobilization of people in their daily lives, in their territories, so that we not only dispute space in the current political system, but point to the new society of Good Living that we want to put in place of current”.

The pre-candidate Mandato Coletivo Bem Viver, which will compete for a seat in the Federal Chamber, is composed of 9 people, and covers diversity with indigenous leaders, popular movements, feminist activists, the fight against racism and the defense of animals.

The socio-environmentalist explains that in addition to the dispute on the national scene, to fight for the election of the first collective term in the history of the Legislative Chamber of the Federal District, the Feminist Mandate Bem Viver was also created, made up of 9 women.

“In both terms, the logic is the same: guarantee a genuinely collective format, unite various struggles and make decisions in popular assemblies. The salary will be the same between the co-deputies and the rest of the cabinet, the surplus of the salary of the person who lends the CPF to the electoral justice is donated to important social causes and the visibility is balanced among all people”, he reports. 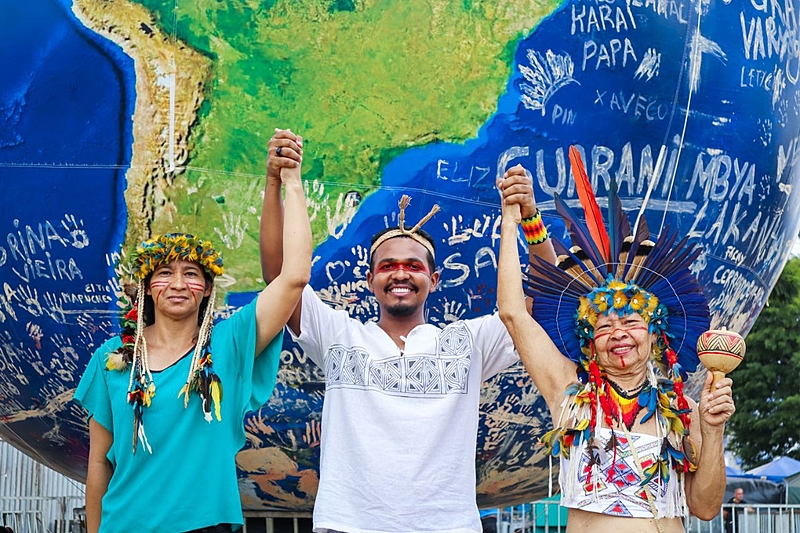 “Brazil has an immense diversity of people and this diversity is on the margins of society within the institutional framework”, says a member of the collective mandate. / Photo: Ascom Indigenous Mandate

In January, the Socialism and Freedom Party (PSol-DF) launched the pre-candidacy for the first collective indigenous mandate for the Legislative Chamber of the Federal District (CLDF). The construction of the mandate is done by Airy Gavião, Muriã Pataxó and Bruno Kanela.

For the artisan and indigenous of the Gavião people of the state of Pará, Airy Gavião, the shared mandate expands the possibility of representation in political spaces.

“The presence of indigenous peoples in every place of power is of paramount importance, it is a right that peoples have to defend their demands”. She emphasizes that the situation of the indigenous population “is very precarious. So, we need to occupy these spaces of power, solution and resistance”.

A member of the pre-candidacy for the indigenous mandate, lawyer Bruno Kanela, emphasizes that collective mandates make political renewal possible, allowing groups that live on the margins of the political system, such as indigenous peoples, blacks, the women’s movement, LGBTQIA+, to be able to see represented in the spaces of power.

“Brazil has an immense diversity of people and this diversity is on the margins of society within the institutional framework”, he says.

For Thiago Ávila, collective mandates still face great challenges in the electoral dispute, one of them is to be able to establish themselves as a new format “within a political system full of problems”.

“It is a different logic of action from common mandates, as they do not denounce the limits of democracy captured by economic power and point to a path of overcoming these limits by replacing representative democracy with direct democracy, inserted in people’s daily lives and built by people to from the territories.

He highlights that “with such hopelessness and frustration with our political system, having the possibility of an alternative that points to the construction of popular assemblies and the collectivization of decision-making, resources and visibility is also a great challenge”.

Several political and social segments of the DF are articulated in shared mandates for the October elections. In addition to the Bem Viver Collective Mandate and the Indigenous Collective Mandate, other initiatives are being built in the city. Coletiva Somos, Coletive Chão and Coletivo 360 are preparing to compete for a seat in the Legislative Chamber.

On the occasion, the rapporteur of resolution No. 23,609, which deals with the choice and registration of candidacies for the 2022 Elections, Minister Edson Fachin, said that “the so-called collective candidacy represents only a format of candidacy promotion that allows the person to highlight their social and collective engagement”.

Musk lost billions of dollars in a day