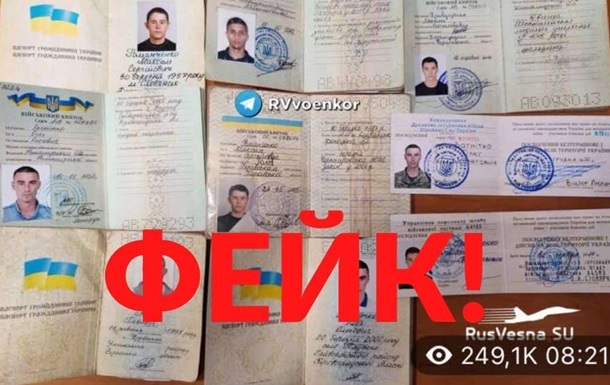 The propagandists said that allegedly the Ukrainian military surrendered so as not to “die for Zelensky’s ambitions”, but used documents from a resident of the temporarily occupied territory for illustration.

The Russians are trying to pass off the inhabitants of the occupied part of the Kharkiv region as prisoners of war.
About it reported in the Borovsky village council.

The propagandists said that allegedly the Ukrainian military surrendered so as not to “die for Zelensky’s ambitions.”

“In the photo, Borovets saw the documents of one of the residents of our community, Maxim Romanchenko. But the fact is that Maxim is not in military service in the Armed Forces of Ukraine and at the time of the occupation he was in his native village and worked at one of the local agricultural enterprises,” the report says. .

It is known in the village that the invaders took the man somewhere, but three days later he returned home.

“Therefore, we can assume that the photos of the documents have nothing to do with reality. The Russians have to invent imaginary Ukrainian soldiers who seem to be surrendering to strengthen their narrative about the imaginary advantage of Russia over the Armed Forces of Ukraine,” the men’s fellow villagers are sure.

The above publication is reported to contain another manipulation.

“In the text accompanying the photo, they are trying to convince readers that the Ukrainian army is fighting not for its land, not for the Motherland and not for its people, but for the” personal ambitions of President Zelensky “. Here, the propagandists mixed everything up. After all, not Zelensky, but Putin attacked to another country in order to take its territories. It is the Russian military who die for the personal ambitions of their president, and our soldiers defend their own from the aggressor and successfully utilize the occupiers,” the village council emphasizes.

Recall that Russian propagandists are intensively spreading a fake about the preparation of shelling of Avdiivka by Ukrainian troops.

Another 346 people were taken from Mariupol to the filtration point