The massacre in Vila Cruzeiro, in Rio de Janeiro, and the death of a man inside a vehicle transformed into a gas chamber, on the coast of Sergipe, marked the week. Both cases drew attention due to the role of Federal Highway Police (PRF) agents.

It is not the first time that the corporation has been involved in operations that end with a high number of deaths. Since the beginning of the government of President Jair Bolsonaro (PL), the PRF has worked in partnership with the military police in at least three massacres.

In addition to this week’s partnership in the action with the Special Operations Battalion (BOPE), which took place in VIla Cruzeiro – which has already reached 25 confirmed deaths –, agents of the PRF were at the side of the Military Police of Rio de Janeiro, in February of this yearin the same region.

The operation left at least eight dead in the Penha complex. At the time, the PM stated that the agents were serving arrest warrants against a cargo theft gang. The operation aimed to arrest Adriano Souza Freitas, known as Chico Bento, alleged head of the Comando Vermelho.

:: Bolsonaro government appointed assassin of the Indian Galdino to a position of trust in the PRF ::

In October of last year, at least 25 people were killed in a joint action between the PRF and the PM of Minas Gerais, in Varginha, in the south of the state. According to the PRF, the action was fighting the so-called “new cangaço”. In a statement, the corporation said that the bandits had attacked the police.

The action took place in two farms. According to the PRF, in the first confrontation, 18 criminals were killed. In this action, 10 rifles were recovered, in addition to other weapons, ammunition, grenades and bulletproof vests.

Another part of the gang was in a second farm. In a new confrontation, seven more criminals were killed and more weapons were recovered and a large amount of explosives. 10 stolen vehicles were also found. No police were injured.

In an interview with Brazil de factopolitical scientist, anthropologist and specialist in Public Security Jacqueline Muniz, a professor at the Fluminense Federal University (UFF), says that, in the country, there are no clear limits on where the competence of each security force begins and ends.

“When there is a question about competence, it is not just the Federal Highway Police. No force organization, and there are more than 10,000 in Brazil, pass this test”.

Muniz warns that, despite the name, the PRF’s activities are not restricted to roads. The institution’s own website highlights that “the PRF is responsible for road safety and the prevention and qualified repression of crime in more than 75 thousand kilometers of highways and federal roads in all Brazilian states and in areas of interest to the Union”.

In all cases, there was the participation of the Nucleus of Special Operations (NOE), elite groups of the corporation, based in each regional unit or superintendence of the PRF.

The NOE has the objective of “planning, coordinating and executing operations to combat the crimes of robbery and theft of vehicles and cargo, trafficking in narcotic substances and weapons, ammunition and controlled products, smuggling, embezzlement, counterfeiting of products, adulteration of fuels “. 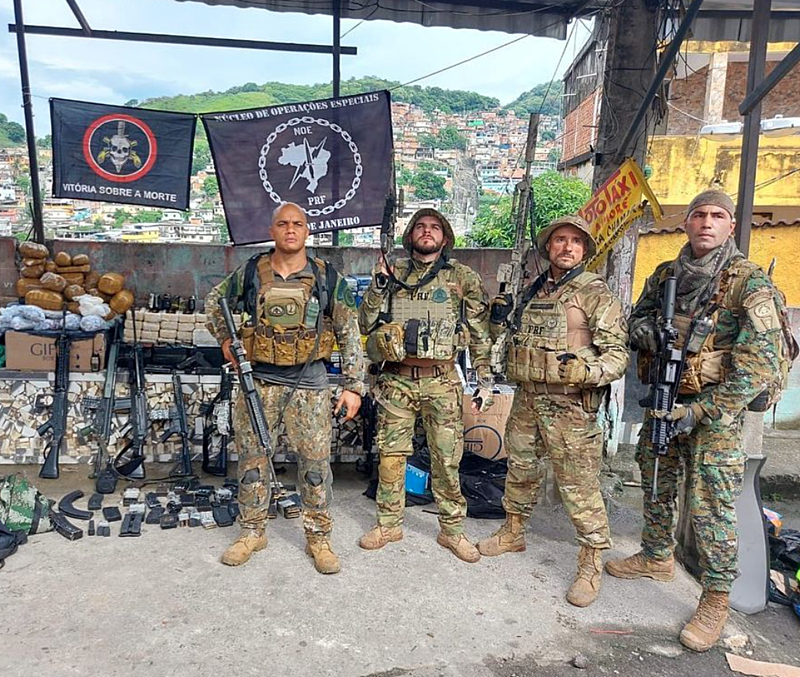 Ties with BOPE and the president’s “pleasures”

The director general of the PRF, Silvinei Vasques, has bet on deepening ties with elite squads of military police. Just over three months before this week’s operation, he met with the commander of BOPE, in Rio de Janeiro.

In a post on his Instagram account, Vasques announced a partnership with the battalion, known for the lethality of operations: “We created a working group for operational, intelligence, teaching and strategic projects between @prfoficial and @bope.oficial “.

“I met with the Commander and his officers from the Special Operations Battalion of the Military Police of Rio de Janeiro. Directors and managers of the PRF in the Operations and Teaching area were present”, he wrote. 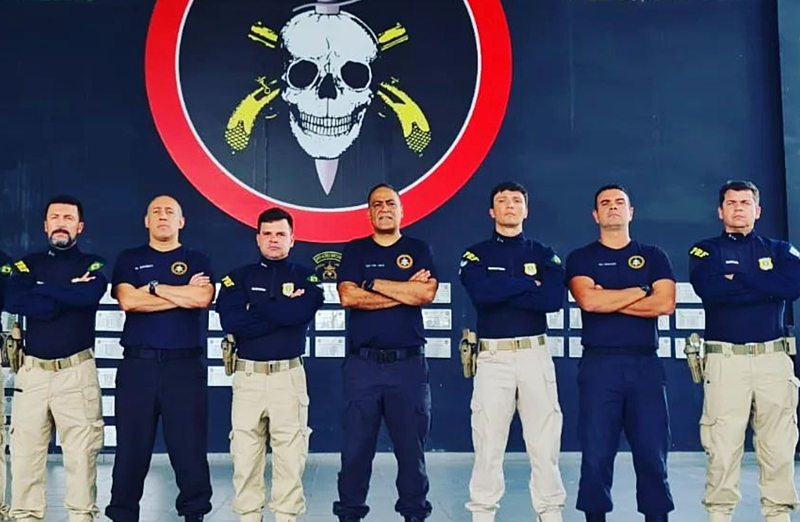 General Director of PRF, Silvinei Vasques (third, from left to right), at a meeting held at Bope da PM-RJ / Reproduction/Instagram

This week, President Jair Bolsonaro signed a decree authorizing the start of the Professional Training Course for 625 surplus people from the last PRF contest. The announcement was made in a video posted on social media, in which Jair Bolsonaro appears alongside the Minister of Justice, Anderson Torres.

Last week, a newspaper report The State of São Paulo pointed out that the president backed off from the idea of ​​granting a greater readjustment for all public security careers. The idea would be to guarantee the restructuring of the career only for the PRF.

The increase to road agents is estimated at around 20%. The other police forces, such as the PF, would have the increase of 5%, as already decided in April, in the same way that it will be for the other categories of civil servants.

Another signal to the PRF was the choice of former general director of the corporation Eduardo Aggio for a position at Palácio do Planalto, as deputy head of Governmental Analysis (SAG) of the Civil House of the Presidency of the Republic.

On social media, Aggio and Vasques show closeness to the presidential family. Current head of the corporation, Vasques recently published a photo next to deputy Eduardo Bolsonaro (PL-SP), dressed in the PRF cap. 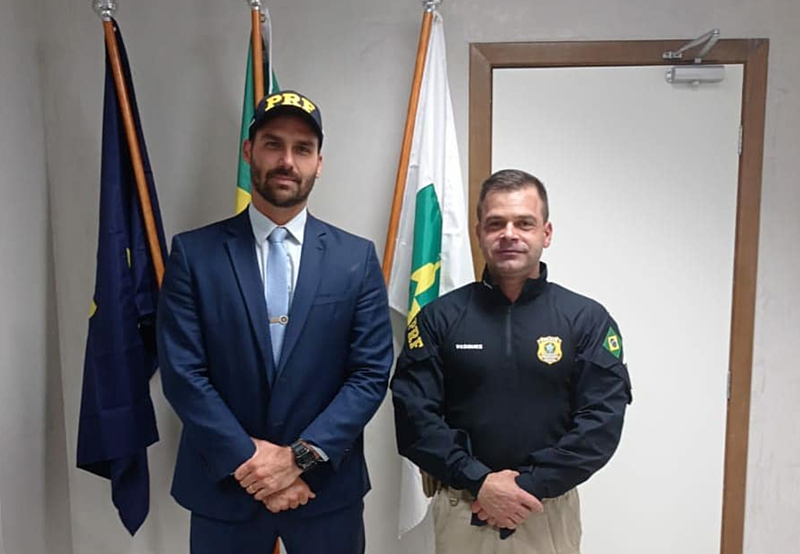 Residents of the city of Umbaúba, on the south coast of Sergipe, caught a police approach that resulted in death, this Wednesday (25). A man was killed after being arrested by two federal highway patrol officers inside a “gas chamber” mounted in the trunk of a PRF vehicle.

The man killed by federal highway police was identified as 38-year-old Genivaldo de Jesus Santos by the portal G1. The victim’s nephew, Wallyson de Jesus, witnessed the situation and stated that his uncle had a mental disorder.

“They asked him to raise his hands and found medication packets in his pocket. My uncle got nervous and asked what he had done. I asked him to calm down and listen to me,” said Wallyson.

In the images recorded by the population, it is possible to see Genivaldo being surrendered by two police officers. It’s on the floor and then it’s placed in the trunk of the cruiser.

:: Sakamoto: “Bolsonarist celebration of the massacre in RJ is alert for the day after the election” ::

While one of the policemen holds the trunk lid to ensure it remains closed, the other pours a large amount of gas into the closed space. When the compartment is opened again, the man no longer moves.

During the Holocaust, gas chambers were designed as part of the Nazi policy of genocide against Jews. The Nazis also targeted Gypsies, homosexuals, the physically and mentally handicapped, intellectuals, and the clergy. The strategy was used to kill millions of people between 1941 and 1945.

In a statement, the PRF stated that the man would have “actively resisted” the approach. The agents then would have used “immobilization techniques and instruments of lesser offensive potential” to contain the victim’s aggressiveness, who fell ill on the way to the police station, according to the corporation.

“On today’s date, May 25, 2022, during police action on BR-101, in Umbaúba-SE, a 38-year-old man actively resisted an approach by a PRF team. Due to his aggressiveness, immobilization techniques and instruments of lesser offensive potential were used to contain him and the individual was taken to the Civil Police Station in Umbaúba.

During the displacement, the approached came to feel sick and immediately rescued to Hospital José Nailson Moura, where he was later treated and death was confirmed.

The team registered the occurrence with the Judiciary Police, which will investigate the case. The Federal Highway Police in Sergipe regrets what happened and informs that a disciplinary procedure has been opened to investigate the conduct of the police officers involved”.

*With the collaboration of Felipe Mendes