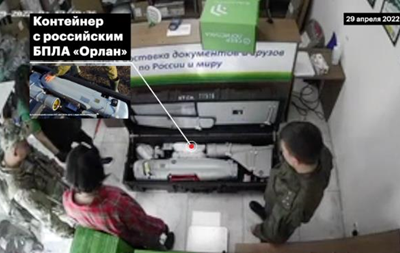 After the story of the mass sending of parcels from the Belarusian Mozyr, journalists continued to follow how the Russian military uses the services of a courier service for the delivery of goods.

Monitoring the parcel delivery company SDEK in 13 cities on the border of Ukraine with Russia and Belarus, the researchers found not only an abnormal increase in shipments that coincided with the start of the war, but also unusual connections between cities, confirming the version of wholesale looting. This publication reports Media zone.

The journalists explain that the CDEK parcel delivery service allows customers to track the shipment, and the weight of the parcel is visible in the page code.

They also learned that the company generates an individual number. Going through the numbers, they collected data on all CDEK shipments since February 21.

As a result, suspicious parcels were found at 13 border checkpoints of the SDEK: in Armyansk and Dzhankoy in Crimea, in Pokrovsky, Rostov Region, in Boguchar and Rossosh, Voronezh Region, in Valuyki, Belgorod Region, in Zheleznogorsk and Rylsk, Kursk Region, in Klimovo and Klink, and in Belorussian Mozyr.

Simultaneously with the withdrawal of Russian troops from the Kyiv region on March 29, the volume of suspicious orders from the border towns gradually increased. If on March 26 they were 338 kilograms, then on March 29 the weight exceeded one ton, and on April 2 it exceeded 2.5 tons.

To prove that such large volumes of parcels are not a sign of stable social ties between the border and Siberian cities, the journalists checked how many parcels went in the opposite direction. About 5.8 tons of parcels came to Yurga from the border, only 51 kilograms came back. Chebarkul, where more than 5.5 tons were sent, sent less than 10 kilograms to the border in all three months. Not a single parcel was sent from Kyzyl to the border.

The leader among the “suspicious” cities was Yurga, a city in the north-west of the Kemerovo region. About 5.8 tons from the Ukrainian border went to the city, where only 80,000 people live.

There are three large military units in Yurga: the 106th separate logistics brigade, the 74th separate guards motorized rifle Zvenigorod-Berlin order of the Suvorov brigade (one of those who stood in Bucha, Gostomel and Irpen) and the 1st Artillery brigade .

The city of Chebarkul in the Chelyabinsk region took the second place in terms of the weight of orders. Two tank regiments are stationed there: the 6th and 239th.

In Kyzyl, the capital of Tiva, 116 suspicious packages were sent with a total weight of more than 3.5 tons. The 55th separate motorized rifle brigade is deployed in Kyzyl.

And in one case, the Russian military used the CDEK to transport the Russian Orlan drone – and, possibly, robbed not only Ukrainians, but also their own army.

Recall that in the city of Irpin, Kyiv region, two looters threw a grenade at women who complained about them. The attackers were detained by local territorial defense fighters,

Earlier in Bucha, looters plundered a shopping center that was destroyed during the shelling. They found various goods worth 5 million hryvnia.

De Zerbi could take over Udinese

Iran offers mediation in negotiations between Russia and Ukraine