The crisis is aesthetic, ethical and political. We cannot forget that President Dilma Rousseff (PT) suffered a coup ‘with the Supreme with everything’ and that the deputies and senators claimed to do this for God, for the family and in memory of torturers. Let us not forget that art and culture continue to suffer daily attacks and that the public press is censored every day.

Having said that, I want to echo the boo from Ceará that was given by public servants, students and professors at the Federal University of Ceará, alongside artists, union leaders, popular social movements and left-wing parties in front of the UFC Rectory to the intervener who didn’t even deserves to have its name registered here.

This boo was not only given to the intervenor of the University, but also to the capetão who wants to invade the Palácio da Abolição, the other capetão who took the Palaces of Alvorada and Jaburu by storm, in addition to the Esplanade of Ministries, Chamber, Senate, city halls , governments, state and municipal parliaments, the judiciary and the entire public and democratic territory that was invaded by the hatred, rancor and disgust that the Brazilian bourgeoisie launched and launches daily against us workers.

When I say bourgeoisie, I mean bankers, owners of Havan, owners of Amazon, owners of malls, owners of large industries, agribusiness agents. I am referring to those people who command almost all the money in the world, while almost the entire world cannot afford gas, daily bread, clothes for their children, let alone invest in their future. 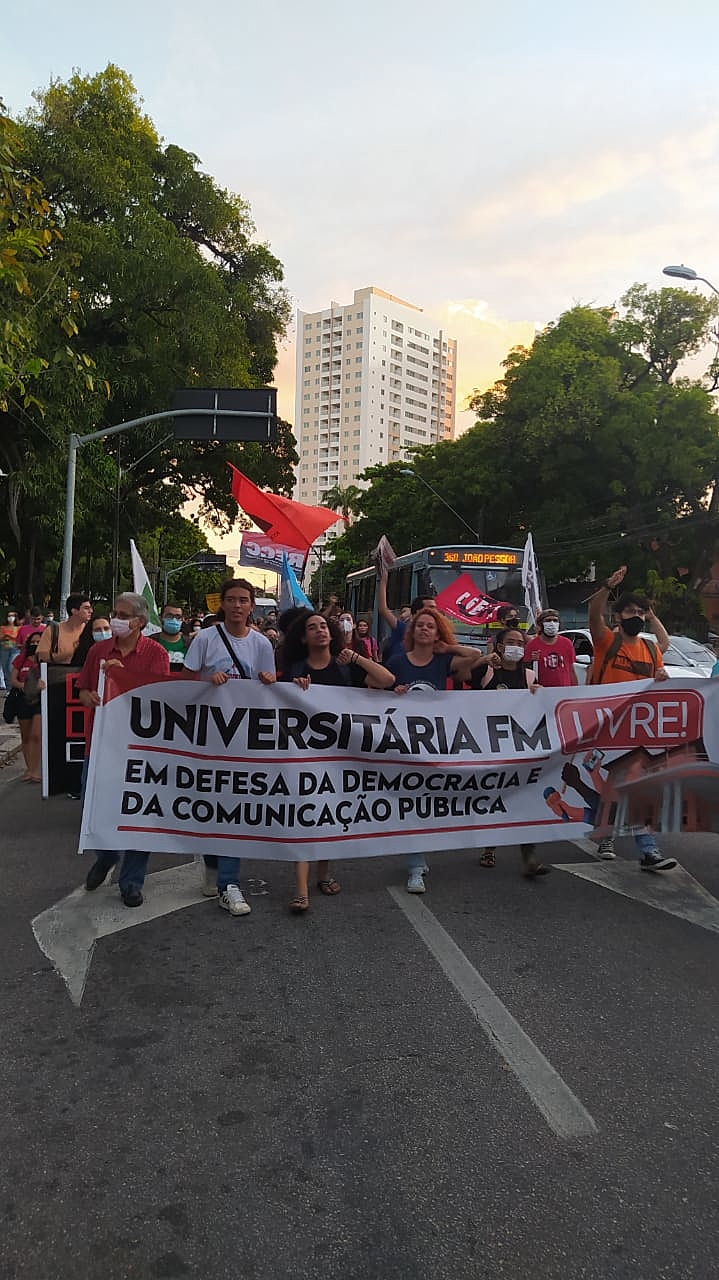 Walk through the Benfica neighborhood brought together around 2,000 people in defense of Rádio FM Universitária / Lívio Pereira

The case of censorship on the University Radio of the UFC also demonstrates one of the most structural aspects in our Brazil, racism. Among the justifications for the attacks by the UFC Culture Foundation that manages the Radio (an institution also under intervention) against professor Nonato Lima, UFC server, journalist and historical coordinator of the Radio, for playing on his program and on FM programming , songs linked to religions of African origin and Brazilian black culture. We need to defeat the racist colonialism that still reigns in Brazilian culture and for that we need to talk about whiteness.

Let’s not forget that the couple, who are white, who invaded the Palácio do Planalto, in the first hours inside the place, sent away the important work Three Orixás by the painter Djanira da Motta e Silva, in addition to exchanging the chairs with red seats for chairs with blue seats. I repeat, the crisis is aesthetic, ethical and political. Not even the religious works of art, the Catholic ones, got rid of their fascist rage, which pushed everything to Jaburu.

Ato stopped in front of the Cearense de Cultura Foundation headquarters for the presentation of Maracatu Solar. / Livio Pereira

We on the left, especially whites like me, need to understand that racism is a relational structure, which affects blacks and whites, with the former negatively and the latter positively. Part of the fact that we are experiencing this absurd misery and terror in our country is also because we have not overcome racism. It will be difficult for us to do so, but as long as we whites on the left don’t realize how much racism privileges us on a daily basis, we will not be able to truly unite as a class to make the revolution.

Even because the working class is mostly black, whether in industry, commerce or in the countryside, wherever. The Popular Project for Brazil was born in the abolitionist struggle of Luís Gama, Luísa Mahin and many other black fighters against slavery.

** This is an opinion article. The author’s view does not necessarily express the editorial line of the Brasil de Fato newspaper.

More polluting and expensive, thermoelectric plants multiply and keep Brazil away from the energy transition

“A Trama”: series investigates collusion that resulted in Lula’s arrest

Restrictions for tourists eased in Transcarpathia