Colombia is about to elect a new head of state and the election campaign was marked by increased violence and tensions over the conduct of the election across the country. Next Sunday (29), about 39 million people are qualified to elect president and vice president for the next four years. According to the Peace and Reconciliation Foundation (Pares), between March 13 and May 13, 222 people were victims of electoral violence in Colombia, with 29 murders and 193 threats.

“We have a very tense, complex environment, which shows how the real factors of power work. Political and economic groups, which have led the country especially in the last 25 years and have developed the so-called democratic security doctrine — a euphemism for the doctrine of the enemy within — authorizing a huge US influence in the political direction of the country”, says the former mayor of Apartadó and human rights defender, Gloria Cuartas Montoya.

According to survey of Peace Development Institute (Indepaz)in 2022 alone, 42 massacres were recorded across the country and, six years after the signing of the Peace Accords, 1,624 ex-combatants and community leaders were murdered.

“During all the peace processes in Colombia, the government of turn always assures the Colombian elites that it will not transform neither the economic model nor the doctrine of military security. These two conditions meant that we could not advance in several conflicts, on the contrary , deepened them”, highlights Montoya, elected one of the 60 women who worked the most for world peace, in 2007, by UNESCO.

Only 28% of the pacts established in the Havana Accords, created within the framework of the peace agreement with the FARC-EP, were implemented by the end of 2021according to a study by the Kroc Institute, linked to the University of Notre Dame. Last year was also the most violent in the last 20 years, with 96 killings and 338 victims, according to Indepaz.

Last week, the Senator of the Historic Pact coalition, Paulino Riascos, suffered an attack. In the south-west region of the country, pamphlets by the paramilitary group Águias Negras were spread, threatening to assassinate those who campaigned for the progressive ticket, with five days to go before the elections. electoral campaign, which led to the suspension of activities in the country’s coffee zone.

Because of this history, according to the Colombian electoral authority, Gustavo Petro became one of the ten people most guarded by the national police. 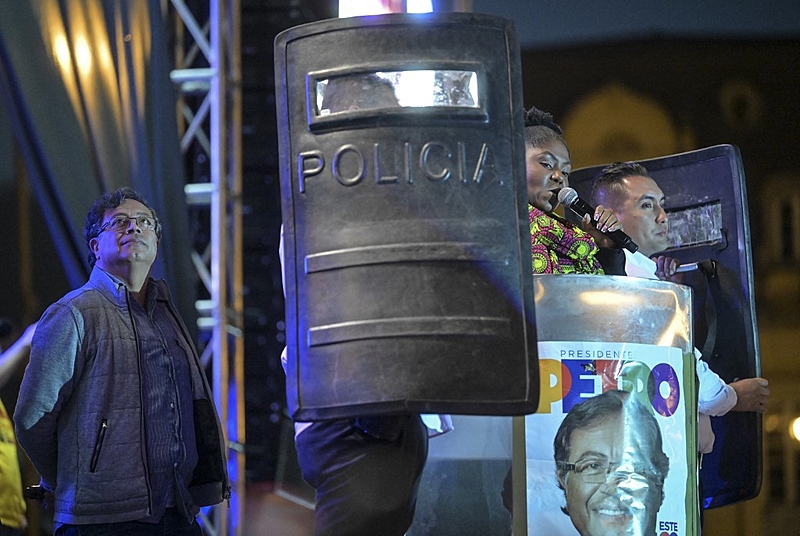 On the left, Gustavo Petro. On the right, vice presidential candidate Francia Márquez surrounded by security during a rally / Juan Barreto / AFP

Likewise, there are threats of removal from the position of the current head of the National Civil Registry, Alexander Vega, for allegations of irregularities during the legislative elections held in February. Between the preliminary results and the official numbers, there was a difference of 390 thousand votes.

The request for exoneration would have been filed by lawyer Sergio Alzate, from the NGO Colombia Transparente, and the case is being analyzed by the Colombian Public Ministry. vega these that the complaint uses “mere speculation” about its actions to satisfy “personal and hidden interests and alter the citizen’s peace”. The official guarantees that the electoral process was smooth and states that only 17 polling places had to be changed on March 13, most of them for climate or logistical reasons, only three would have been changed due to cases of violence.

“Presidential elections cannot be suspended or postponed, according to our Constitution. The process formally begins with elections abroad and will end on May 29”, declared the head of the Civil Registry at a press conference.

According to the classification of the Public Defender’s Office of Colombia, of the total of 1,123 municipalities in the country, 47.3% are vulnerable to possible human rights violations and in 206 municipalities there is a high risk of violations of citizens’ rights, being the Pacific region the most dangerous area.

About 68.4% of Colombians believe that there may be vote buying in their municipality, according to the electoral scenario carried out by the Latin American Strategic Center for Geopolitics (Celag)published on the 20th of May.

“Other complaints we receive from citizens is that employers are forcing workers to take the list of family members and people who live with them and commit to declaring their vote for a candidate,” he said. comment Aura Rodríguez, member of the Electoral Observation Mission (MOE).

A total of 67,969 electoral witnesses (a kind of volunteer inspectors) were registered, 43,300 from the Pacto Histórico slate, 19,300 from the Team for Colombia and 523 from the Centro Esperança coalition. 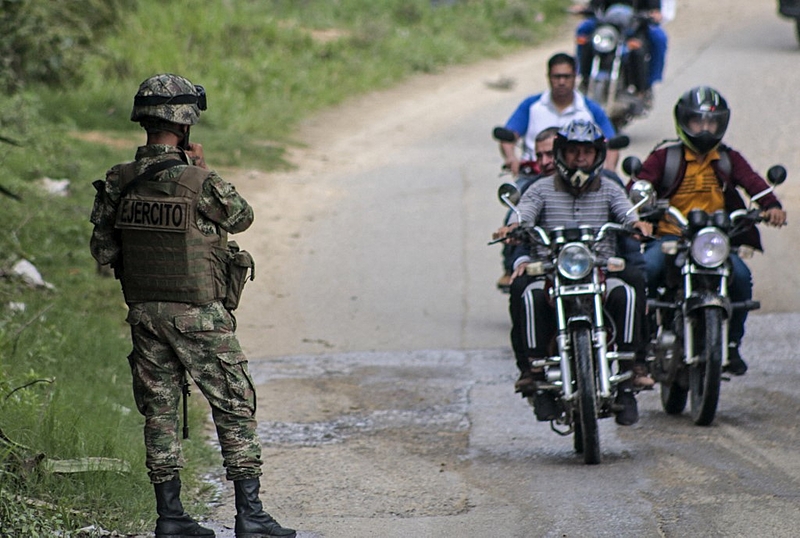 The Colombian army is the second largest in the region, with around 300,000 soldiers, behind only Brazil, despite the fact that the Colombian territory is four times smaller. Schneyder Mendoza / AFP

During the closing act of the campaign in Bogotá, Petro issued an alert, calling all political campaigns to meet, last Monday (23), to defend the elections against an alleged coup plot. On Tuesday (24), the Historic Pact published a call to the international community to protect the counting of votes.

the former president Andres Pastrana (1998-2002), who signed the first agreement with Washington for the installation of US military bases in Colombian territory, wrote an open letter to President Iván Duque questioning an attitude of the Executive towards the supposed distrust in the institutions and in the fairness of the electoral process of the Next sunday.

The Minister of the Interior, Daniel Palacios, said that the possible suspension or postponement of the elections would be false statements. The third place in the polls, Rodolfo Hernández, dismissed the complaint, “it is irresponsible to take non-existent facts for granted”.

However, other voices, including those from the right sector, have also denounced an alleged campaign of fear. Former minister and member of the Conservative Party, Álvaro Leyva Durán, criticized the position of the prosecutor who removed the mandate of the mayor of Medellín for allegedly supporting Petro’s candidacy, classifying her as a “coup”.

“Something is happening. Someone has fears and is trying to infect the entire country. We have to be serious.” these Duran. In another publication, the former minister accuses two former presidents of “undermining the presidential election process to allege the illegality of the poll results”.

Durán also called for the removal of Colombian army commander Eduardo Zapateiro after his public criticism of Gustavo Petro for his involvement in electoral politics, which represents a constitutional violation.

Relationship with the USA

On Tuesday (24), President Joe Biden also gave a nod to the Colombian government, signing the term of inclusion of Colombia as the first strategic ally of the North Atlantic Treaty Organization (NATO) in Latin America.

The status was conferred on 17 countries, in addition to the 30 members of the military organization. Being an ally does not guarantee the deployment of troops in case of external attacks, but gives preference to the purchase of weapons and military technology. Colombia is the country with the largest presence in the Pentagon, with a total of seven US military bases on its territory, in addition to maintaining a defense cooperation and assistance plan for 20 years, and generating around US$10 billion in the first 15 years of its implementation.

According to independent surveys, the presence of private armies and clandestine units with a US military presence could be greater and reach 50 bases. 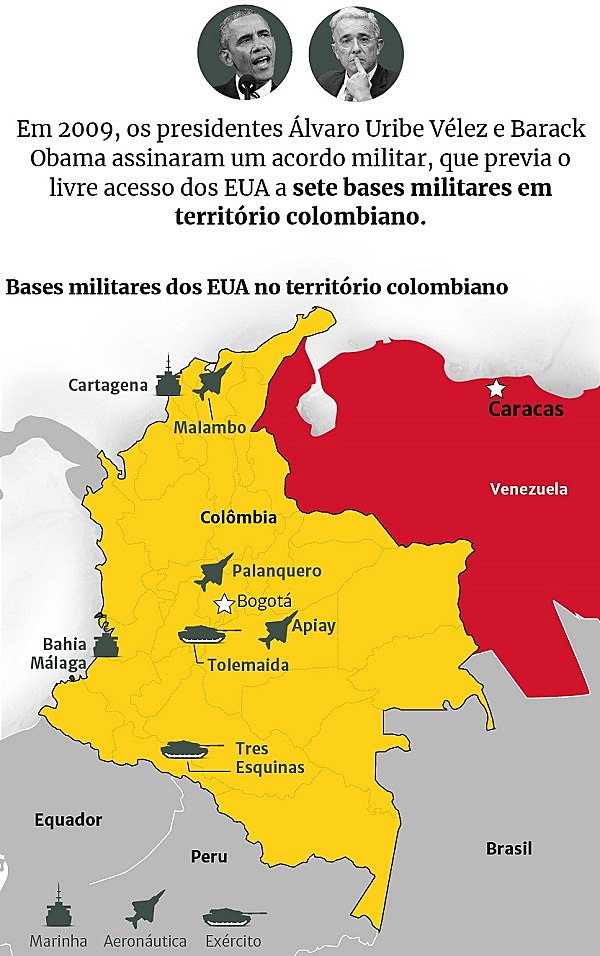 Colombia is the country with the most US military bases, which annually receive new troops from the Pentagon. / BdF

For Gloria Montoya, Biden’s move serves to reiterate the White House’s support for the Colombian right. “It is the meddling of the United States in Colombia’s relations with Nicaragua, Cuba, Venezuela, which is at stake,” she comments.

A group of 24 lawmakers from the Democratic party wrote a letter to US Secretary of State Anthony Blinken, asking the US diplomat to take steps to safeguard the transparency and freedom of the electoral process in Colombia.

in the missive, published last Wednesday (25)comment on the acts of violence prior to the process, the expectation of high popular participation, as well as the favoritism of the Pacto Histórico slate and ask that Blinken transmit these “concerns” to the Colombian government, “to maintain a posture of impartiality and respect for the voter decision”.

“A sector would come to power that is not involved in the dynamics of national politics and that proposes a series of structural reforms, marking a change in the development model. It would undoubtedly influence hemispheric relations, considering that Colombia has so far positioned itself as a continental reference to defeat the Venezuelan government, and also as an alternative to leftist governments in the region”, comments political scientist and researcher on the Colombian armed conflict, Andrés F. Aponte González.

González believes that the White House will have difficulty influencing the decision of the polls.

“The United States would have to respect the outcome. The relationship would change, but relations with the current government are not the best either. Colombia has been the United States’ most unconditional ally in South America and I believe that this bond will not break from one day to the next”, concludes the political scientist.

Restrictions for tourists eased in Transcarpathia

Analysis | Armed arms of the State do not express collective will