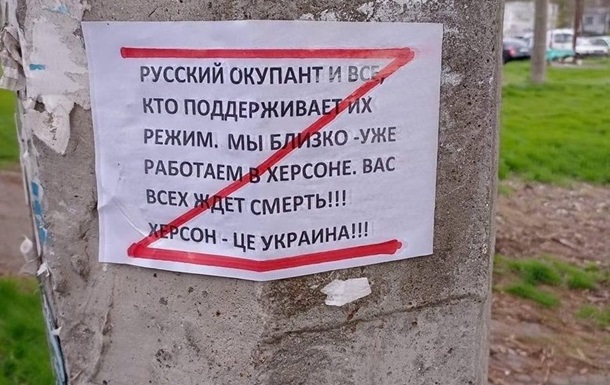 Threats against Russian invaders in Kherson

The leadership of the occupying authorities moves with a large number of guards, in bulletproof vests, in armored vehicles.

The Russian invaders are afraid of the resistance that is growing among the local population of the Kherson region. This is stated in summary Operational Command South, published following the results of the 100th day of the war on the night of Saturday, June 4.

“Local residents continue to resist. Every day, flags, motivational inscriptions and “messages” for the occupiers appear in the regional center, postcards are distributed,” the message says.

In this regard, the leadership of the occupying authorities moves with a large number of guards, in bulletproof vests, in armored vehicles. In addition, the invaders brought about four high-power self-propelled guns of the Pion type to the Kherson region.

On the resistance of the inhabitants of the Kherson region told and the head of the Ministry of Digital Development, Mikhail Fedorov, who showed postcards with threats against the occupiers and called Kherson residents “inflexible people.”

As reported, the Russian authorities do not yet see an opportunity to hold “referendums” in the “LPR”, “DPR”, as well as in the occupied territories of the Kherson and Zaporozhye regions.


Partisans near Melitopol blew up the armored train of the occupiers

The war can end at any moment - OP