The Historic Pact, the ticket for which Gustavo Petro and Francia Márquez run for president and vice president of Colombia, represents one of the broadest alliances contesting the elections in the country. Formally, the coalition is made up of six organizations: Colombia Humana, Unión Patriótica, Partido Comunista, Polo Democrático Alternativo, Aliança Democrática Ample, and Movimento Alternativo Indígena e Social, but in practice, other sectors of the left and even center-right parties support the plate.

With the largest bench in Congress and 40% of the preference in the 1st round of presidential elections, the Pact could be the first progressive alliance to take over the government of Colombia – a country marked by 57 years of armed conflict and governments of the Liberal, Conservative or from the field of uribismo – political current led by ex-president Álvaro Uribe Vélez (2002 – 2010), founder of the ruling party, Centro Democrático, and considered a mentor to the current president, Iván Duque.

“In Colombia, a political system was built of elites who took care of the territories and their wealth, so today they boast political, economic and military power that they do not want to lose. For them it is a threat that the Historic Pact can take over the government”, says Jimmy Moreno, a member of the national board of Congreso de los Pueblos, a movement that supports the candidacy but is not part of the coalition.

This is the third time that Gustavo Petro has run for president. The votes of the 29th of May, 8.5 million according to preliminary resultswere twice the result obtained in the 1st round in 2018 and eight times more than the vote that gave him victory for the mayor of Bogotá, in 2011.

“Our strength is having achieved the unity of the left. However, we still haven’t managed to channel all the mobilization potential to the polls”, comments the member of the national direction of the Patriotic March, Mauricio Ramos.

Petro is from Ciénaga de Oro, department of Cordoba. A 62-year-old economist, he was a member of the guerrilla group Movimento 19 de Abril (M-19) in his youth and was codenamed “Comandante Aureliano”.

He was one of those responsible for the transition from urban guerrillas in the M-19 Democratic Alliance party, for which he was a constituent in 1991 and deputy until 2006. In 2011 he was elected mayor of Bogotá (2012-2015) with the Alternative Democratic Polo party, and since 2018 acts as a senator already for the new legend, of which he was also founder, Colombia Humana. After Rodolfo Hernández’s refusal, candidate Gustavo Petro went alone to the first debate of the campaign in the second round, organized last Thursday (2), by feminist movements in Colombia / Daniel Munhoz /AFP

Francia Márquez is 40 years old, was born in Yolombó, Antioquia, but lived in the community of La Toma, in Cauca, where she began her political life in demonstrations against the forced removal of the community to free the area for mineral extraction.

She became a lawyer to represent her community. In 2018 she won the Goldman Environmental Prize for its role as an environmental advocate. Until starting the campaign for the presidency, she also served on the National Council for Peace.

For the leftist movements and organizations that make up the electoral alliance, the duo represents a moment of rupture for the country’s politics, which has been expressed in the escalation of mobilizations in the last four years, the apex being the largest general strike in Colombian history, started in April last year.

“Change will not come by decree. Petro and Francia will form a transitional government. We believe that what they can do is create the conditions for us to become a country where differences are resolved through dialogue and respect”, says Mauricio Ramos. , leader of the Patriotic March.

a path to peace

The Historic Pact program rescues several articles provided for in the Peace Accords, signed in 2016, which have not been implemented to date. Among them is the integral rural reform, which provided for allocating 7 million hectares of land to former guerrillas and small farmers. With that, Petro and Francia ensure that Colombia could specialize in the production and sale of 11 foods: cassava, corn, rice, wheat, potatoes, avocados, bananas, soybeans, sorghum, yams and tomatoes.

:: Watch the video | With elections, Colombia may be on the verge of structural change, says Iván Cepeda ::

The ticket also proposes to revoke the tax reform approved in the government of Iván Duque and implement a reform of the state security forces, two factors that were the trigger for the 2021 strike.

It also promises free higher education for the poorest, as well as incentive grants for low-income students. 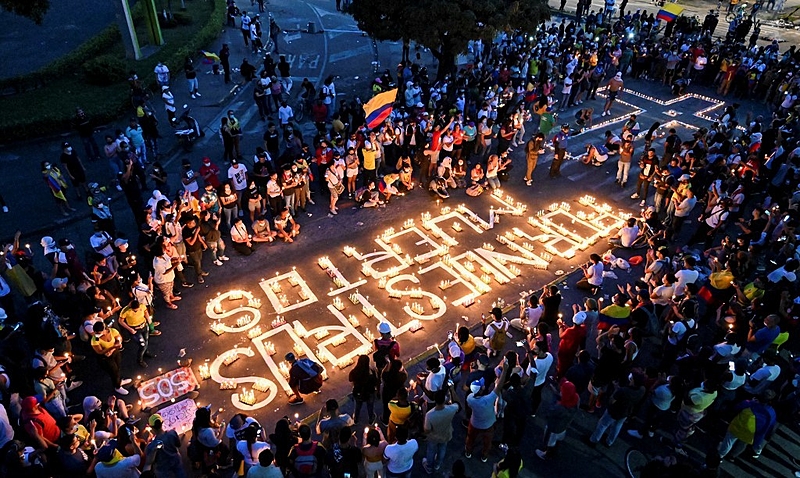 There are already more than 1,600 human rights leaders and activists who have been murdered by Colombian state repression forces since the signing of the 2016 Peace Accords / Luis Robayo / AFP

The former commander of the FARC-EP (Revolutionary Armed Forces of Colombia – People’s Army) and current senator for the Comunes party, Rodrigo Granda, assures that the last four years have been “lost” and have already requested the extension of the period of application of the agreements .

“Without the land, we cannot have productive projects for an agrarian movement, like the one that gave rise to the old FARC-EP guerrilla. The vast majority of the people who were part of it left the hoe to get the rifle, now we are doing the opposite way.” , it says.

For some sectors that support the alliance, if Petro manages to implement all six chapters that comprise the Peace Accords, it would already be a great leap in the construction of a new economic model for the country.

“We have to be moderate. We believe that Petro will not be allowed to do more than is possible. The peace agreements have the support of the majority of the Colombian people, as well as an important sector of the right and the elites that have always held power, the community and there is nothing more to do, it is necessary to implement them”, defends the leader of the Patriotic March.

The resumption of negotiations with the National Liberation Army (ELN), the largest active guerrilla group in the country, with a presence in around 200 municipalities, is also seen as a possibility in the management of the Pact.

Colombia has been experiencing a civil armed conflict for five decades. In the two years following the signing of the Accords, there was a drastic decrease in violence rates, however, in the last biennium the figures increased again, with 2021 being considered the deadliest year of the last decade in the country, with 96 massacres and 338 social leaders. dead. 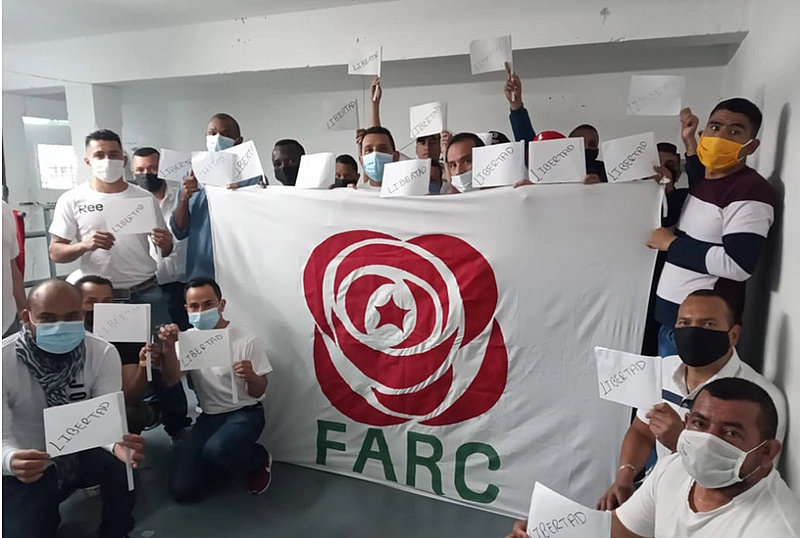 Political prisoners of the FARC organize themselves in a Council inside the prison ‘La Picota’, located in the southeast of the city of Bogotá / Sasha Yumbila Paz

Since 2016, there have been more than 1,620 victims, and in 2022 alone, 44 massacres were recorded, with 158 dead, among former guerrillas and human rights defenders, according to a survey by the Institute for the Development of Peace (Indepaz).

The situation of violence intensifies close to the elections. In addition to the death threats against Petro and Francia, between March and May, 222 reports of electoral violence were registered, including threats and homicides, according to the Peace and Reconciliation Foundation (Peers).

“We need to establish humanitarian agreements in the territories in the face of this escalation of war. But we also need to carry out an exercise in memory, truth, reparation and non-repetition. The State cannot wash its hands and must assume its responsibility for evictions, judicializations, murders, disappearances forced, finally, with the imposition of this model of death and spoliation”, defends Jimmy Moreno, from the Congreso de los Pueblos.

In search of alliances with center-right parties, such as the Liberal Party, Radical Change (Cambio Radical) and National Union (de la U party), Petro would already be softening his speech. An example would be the proposals for the health sector: in the government program, he defends the strengthening of the public network, suspending contracts with outsourced companies in municipal management. Already during the campaign he talks about “inspecting” these structures.

On the other hand, there are those who argue that with a large number of seats in Congress and control of the Executive, this would be the time to move forward with structural changes based on a new constitution.

“We defend an open constituent process, so that people start to think about what country we need, what a new democracy would be like, what a country would be like that really takes politics out of arms. It would be a great national political pact to take the country out of violence. “, says the senator of the Comunes, Rodrigo Granda. Colombia is the country with the most US military bases, which annually receive new troops from the Pentagon. / BdF

Relationship with the USA

Petro and Francia could also be held back by pressure and influence from Washington. In the week before the 1st round, President Joe Biden signed the memorandum of inclusion of Colombia as the first strategic ally of the North Atlantic Treaty Organization (NATO) in Latin America.

The United States has seven military bases operating in Colombian territory, in addition to the headquarters of the main agencies, such as the FBI, CIA, DEA and USAID, with the presence of tens of thousands of US soldiers.

“We hope that with the Democratic Party in power again, and they having been witnesses of the negotiations, they will now recognize the Havana accords, to seal peace in Colombia. This would be the greatest contribution of the USA”, comments Rodrigo Granda.

“While we are going to have better conditions with this government, we also believe that the war in the territories will intensify, so we must dynamize our popular organization”, analyzes the leader of the Congreso de los Pueblos.

The senator for the Communist Party of Colombia, Gloria Ramírez, believes that it would be possible to reverse the presence of US military bases in Congress. “Today they are illegal, because they never passed the approval of the Legislative”.

However, he emphasizes that “the relationship will not be a rupture with the US government, because it would lead us to a situation of isolation and that is not what we seek. We want our national sovereignty to be respected, for there to be Latin American integration and for us to have a of peace”, said the communist parliamentarian.

The second round will be held on June 19, while the inauguration is scheduled for August 7. According to the latest survey, carried out by the National Consulting Center (CNC), with the participation of 1,200 Colombians from 43 municipalities, there would be a technical tie in the second round. On the center-left, Petro and Francia appear with 39% of voting intentions, while on the right, Rodolfo and Marelen, would have 41% of the preference. Already 14% remain undecided, and the margin of error is 2.8%.

The media described the scheme for unblocking the ports of Ukraine